Marshall Continues To Believe. The Thundering Herd Takes Another Step In Its Quest for the National Championship 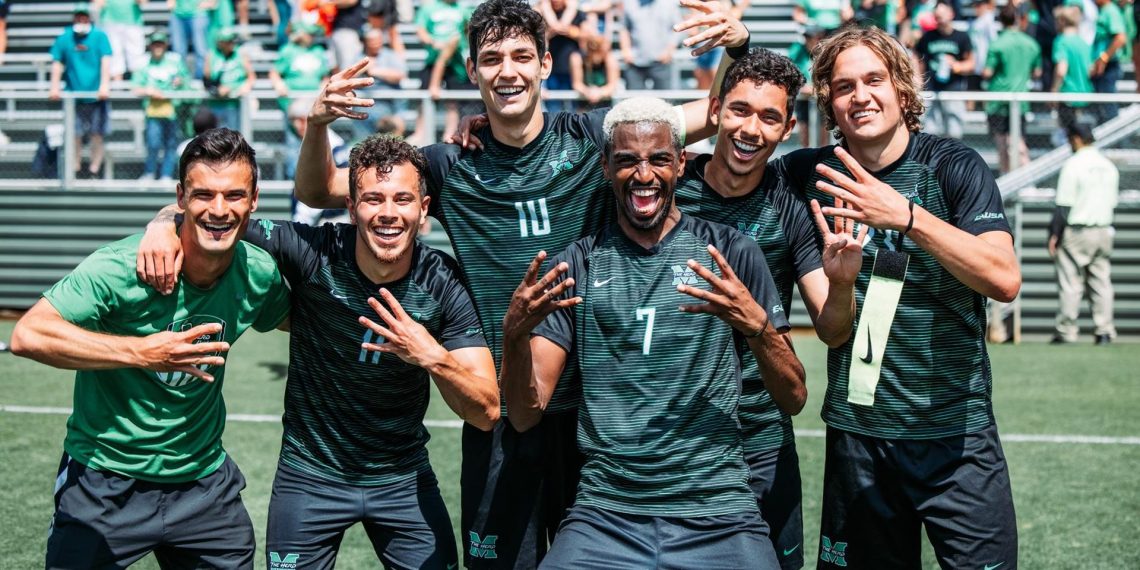 Marshall Tops North Carolina 1-0 To Advance To The National Championship Contest On Monday Against Indiana.

Both North Carolina coach Carlos Somoano and Marshal coach Chris Grassie entered the semifinals of the College Cup on Friday having sorted out and implemented the system of play that best fit the collective talents of their respective teams and provided their players the best opportunity to succeed. As would be expected at this point of the season both stuck with what has worked for their teams in the past, almost to a fault, when their teams faced each other with an opportunity to advance to the national championship game on the line.

The difference maker in the contest came when Marshall converted its lone shot of the evening in the 60th minute with senior forward Jamil Roberts (4g, 5a) contributing what proved to be the game-winning goal for the Thundering Herd. The sequence that led to the goal began when redshirt sophomore Milo Yosef (4g, 4a) pushed the ball down the right side of the pitch into space and sent a pass into the box which junior midfielder Vitor Dias (6g, 6a) skillfully flicked to create the space and the angle that Roberts needed to place his shot into the back of the net.

From a tempo and pace standpoint the contest was two games in one. The first portion of the contest included the entire first half and the second stanza up until Marshall scored. During the first portion UNC pushed forward and pressed the Marshall backline in what might be considered the soccer equivalent of a basketball full court press.

The Tar Heels hoped to create a turnover or defensive miscue that they could exploit. For the most part Marshall seemed content to seek to maintain possession going east and west making few attempts to go north and south and push forward, play over the midfield, or find a seam they could penetrate.

North Carolina did a good job of containing Marshall’s attack and limiting the number of times that Diaz and forwards Yosef and Roberts were able to get the ball to their feet in the attacking third. However, the effort that the North Carolina forwards expended and the spacing it created reduced their ability to put together any type of buildup on the offensive side of the ball.

The Marshall backline of center back Nathan Dossantos, right back Jan-Erik Leinhos and left back Gabriel Alves along with netminder Oliver Semmle did a good job of maintaining their composure and not letting the pressure that they were under create a costly miscue.

After Marshall scored, the pace and the tempo of the match changed significantly. The goal seemed to reenergize the Thundering Herd and for a while they opened the field of play, increased their movement off the ball with a more attack-oriented penetrating mindset. North Carolina on the other hand began to pick up their pace pushing additional numbers forward in an effort to secure the equalizer. Marshall then responded to the additional numbers that North Carolina was pushing forward with a more condensed approach on the defensive side of the ball in an effort to contain the Tar Heels and prevent them from scoring the equalizer.

North Carolina forwards Giovanni Montesdeoca, Santiago Herrera and Alex Rose, midfielder Milo Garvanian and defender Joe Pickering were among those who pressed the attack and came close on a couple of attempts but were unable to find the back of the net. Somoano made several substitutions in an effort to keep fresh legs on the pitch but the effort the Tar Heels had expended and the physicality of a contest that included 19 Marshall fouls and 10 by UNC may have taken a toll that impacted North Carolina’s ability to finish the opportunities they had during the later part of the game.

North Carolina had an 11 to 1 advantage in shots for the evening and a 5 to 1 advantage in shots on goal but Marshall prevailed in the one statistic that really mattered and that determined who advanced. The Tar Heels concluded a very productive season with a 9-5-4 record that included a trip to the College Cup for the seventh time in the past 13 years and for the fourth time under the guidance of Carlos Somoano.

Chris Grassie and the Thundering Heard continue to take care of business and believe in their ability to prevail as a team. Marshall clearly has earned a shot at the National Championship match on Monday against perennial powerhouse Indiana after advancing past Fordham, number one seed Clemson, number eight seed Georgetown and North Carolina.

There is a ton of excitement and energy surrounding Marshall as reflected in the number of Thundering Herd fans in the stands who made the trip to Cary, North Carolina to support the program.