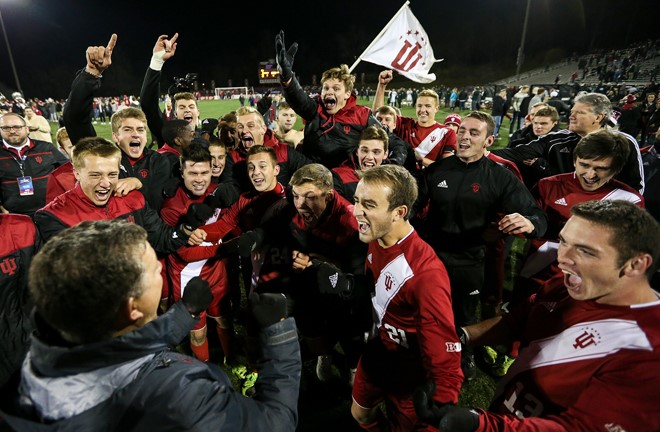 Both contests could have gone either way but when it was all said and done Indiana and Akron prevailed in penalty kick shootouts to earn the right to advance to the 2017 College Cup.  One half of the College Cup field is set with the other two participants to be determined Saturday.

The thrill of victory and the agony of defeat is never more apparent than when a berth to the College Cup is on the line.  Shootouts are exciting but they always seem like a harsh way to decide who earns the right to advance to the College Cup.  However the bottom line is that at a certain point there has to be a way to make the determination.

For the first time all year,  Indiana trailed in a contest when Michigan State forward Ryan Sierakowski placed a header into the back of the net in just the second minute of play to give the Spartans a 1-0 advantage.  The goal came out of a nice combination of passes that began with a throw in by senior midfielder Ken Krolicki to forward DeJuan Jones who created a little space off the dribble and then sent a pass back to Krolicki who sent it into Sierakowski.

The contest remained 1-0 at halftime.  The question about how Indiana would react to playing with a deficit was resolved in the affirmative when the Hoosiers aggressively picked up the pace of their attack while still remaining organized on the defensive side of the ball.  The breakthrough for Indiana occurred in the sixtieth minute of play when redshirt junior midfielder Trevor Swartz  scored out of a corner kick to knot the score at 1-1.

Both teams attacked during the overtime periods but neither was able to find the back of the net.

Francesco Moore, Rece Buckmaster, and Autin Panchot converted their penalty kicks for Indiana and freshman netminder Trey Muse came up big for the Hoosiers with two stops to give Indiana the edge they needed to survive and advance to the College Cup for the nineteenth time and the first under head coach Todd Yeagley.

The Hoosiers had a twenty-three to fifteen advantage in shots for the evening.  Michigan State goalkeeper Jimmy Hague was outstanding between the pipes for the Spartans with eight saves.  Trey Muse had five saves in goal for Indiana along with a huge performance in the shootout.

Michigan State head coach Damon Rensing stated, "I wish them all the best in the College Cup.  I'm pushing for our Big Ten brothers to win the national title."

Indiana head coach Todd Yeagley stated, "We never want to get to PKs." We train hard for it.  You don't want to see the game won there.  It's a tough way to go out.  It's not the way you want to finish the game."  He then added, "I know how much this means to so many people.  To get this opportunity, it's a great feeling of accomplishment."  Yeagley pretty much summed things up when he stated, "There's nothing like IU soccer."

Michigan State concludes a very successful season with a 13-3-4 record.  #2 seed Indiana now stands at 17-0-6 and advances to the College Cup where they will face the winner of the Fordham vs. #3 seed North Carolina contest which takes place Saturday evening.

Akron 0 – Louisville 0 – Akron advances 4 to 3 in a penalty kick shootout. –  This intense Elite Eight matchup took place before a crowd of 3,179 fans at Dr. Mark and Cindy Lynn Stadium in Louisville.

Defense ruled as it often does in an NCAA Tournament contest when the stakes are so high and a mistake on the defensive side of the ball can prove so costly.  Both teams attacked but neither team was able to find a way to solve the puzzle on the offensive side of the ball and find a weakness in their opponent that they could exploit.

Having said that, the only statistic that really mattered was the one on the scoreboard which didn't change during 110 minutes of play and thus it came down to a pressure packed penalty kick shootout.

Louisville jumped out to a 2-1 advantage in the shootout but Akron remained focused and prevailed in the end with Stuart Holthusen, Sam Gainford, Joao Moutinho and Niko De Vera converting their penalty kick attempts while Akron's 6'6" junior goalkeeper Ben Lundt came up with two key saves to provide the Zips with the edge they needed to prevail and advance to the College Cup for the fifth time in program history and the second time under the guidance of head coach Jared Embick.

Louisville under the direction of Ken Lolla concludes another very productive season with a 13-2-5 record.  The success the program has enjoyed under Lolla is reflected in the fact that this is the fifth time in the last eight years that the Cardinals have reached the Elite Eight.

Lolla stated, "It's a tough way to bow out of the NCAA Tournament, without having lost.  It's a tough way to decide it but it is the way it is."  He added, "I'm sad for our guys, especially the seniors."  Lolla summed things up well when he stated, "When you put so much into the season and it ends so suddenly, it's difficult and it's a lot to process.  Only time will allow us to deal with it."

#5 seed Akron is now 18-3-1 and advances to face the winner of the #9 seed Stanford vs. #1 seed Wake Forest contest which will take place Saturday evening in Winston-Salem.