North Carolina and Stanford Advance to the 2017 College Cup 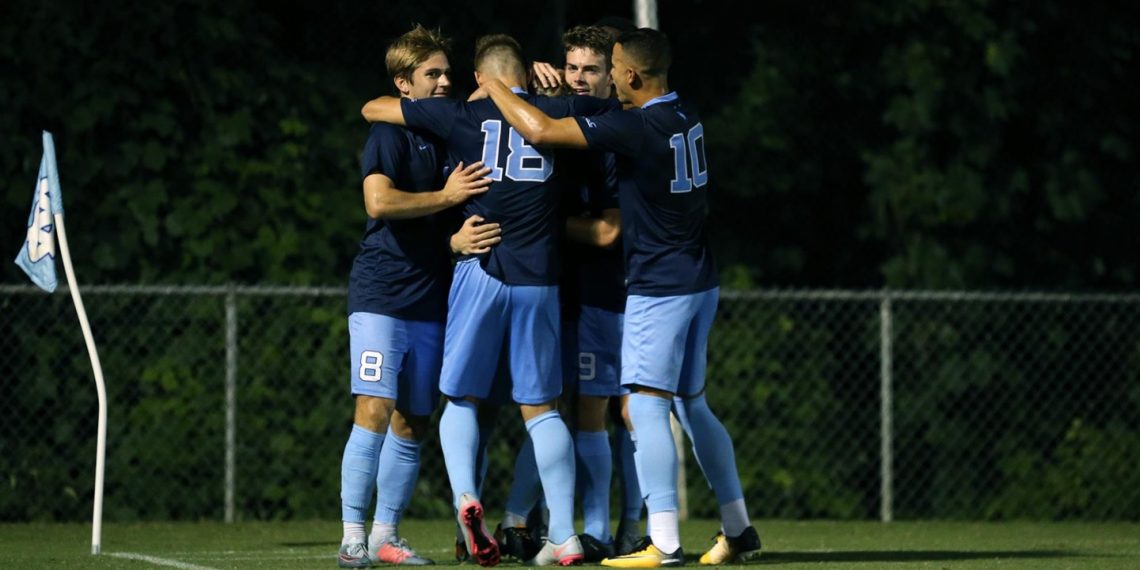 Only four teams remain standing as #3 seed North Carolina and number #9 seed Stanford prevail on Saturday night to complete the College Cup (Final Four) field joining #2 seed Indiana and #5 seed Akron. The Tar Heels prevail despite another gutsy effort by a very talented Fordham team. Stanford travels cross country and comes out on top over the #1 seeded Demon Deacons to keep their chances of an improbable third consecutive natiaonl championship alive. The Atalntic Coast Conference, the Big Ten Conference, the Pac-12 Conference, and the Mid-American Conference will be represented in the College Cup.

North Carolina 2 – Fordham 1 – This Elite Eight contest took place at WakeMed Soccer Park in Cary, North Carolina where the Tar Heels have been playing their home games this year due to the renovations taking place at Fetzer Field.

Fordham held their own and once again it seemed like their magical ride might continue when senior midfielder Jannik Loebe's shot out of a free kick from twenty-three yards out deflected off a Tar Heel defender and into the back of the net to tie the contest at 1-1 in the sixty-third minute of play.

Neither team was able to find the back of the net in the first half of play but as has been their pattern at times this year, North Carolina seemed to pick up the pace and jelled into the rhythm of their attack in the second half.  The Tar Heels jumped out to a 1-0 lead in the sixty-first minute when sophomore midfielder Jack Skahan sent a ball into the box that senior forward Zach Wright was able to control and one-time into the left side of the frame from ten yards out.

That set the stage for Fordham's Jannik Loebe to knot the score out of a free kick that was awarded when his brother junior forward Janos was fouled to give the Rams new life.

The Tar Heels then netted what proved to be the game-winner in the eightieth minute of the match when sophomore midfielder Cam Lindley pushed the ball out wide to Wright who made a nice move down the side to create a little space before sending a cross to senior forward Alan Winn in the box who headed it into the back of the net to give North Carolina a 2-1 advantage.  The goal was Winn's eleventh of the year and his fourth game-winner.

North Carolina had a fourteen to seven advantage in shots for the evening with nine of their fourteen shots coming in the second stanza.  Rashid Nuhu had three saves in goal for the Rams while James Pyle had one between the pipes for the Tar Heels.

Fordham under the direction of head coach Jim McElderry has had successful seasons in the past winning the Atlantic 10 Championship in 2014 and 2016 and earning a berth in the NCAA Tournament both years.

However the 2017 campaign during which the Rams were 14-6-3 will be remembered as a banner and barrier breaking season for the program during which Fordham claimed their first ever win in NCAA Tournament play. The unseeded Rams advanced to the Elite Eight by topping St. Francis Brooklyn in the first round 3-2, Virginia 1-0 in the second round, and Duke in the Sweet Sixteen in a match decided by a penalty kick shootout.

Fordham head coach Jim McElderry stated, "The initial feeling is dissapointment that we're not going to play another game.  Following such a tight game, 1-1 in the second half, we had just as good a chance to win the games as they did and we're disappointed."  McElderry added, "Once we have time to step back, we can appreciate everything our seniors have done and the entire 2017 group in order to advance in this tournament."

#3 seeded North Carolina under the direction of head coach Carlos Somoano  improves to 17-3-1 and marches into the College Cup where they will square off with #2 seed Indiana.  It will be UNC's sixth College Cup appearance in the past ten years and their second in a row.

Stanford 2 – Wake Forest 0 – This one took place at Spry Stadium in Winston-Salem before an energetic  crowd of 4,628 fans.

It just felt like this was going to be the night that #1 seeded  Wake Forest got the Stanford monkey off their back but that was not to be the case as the #9 seeded Cardinal put together what may have been their best performance of the year to date to prevail over the Demon Deacons for the third season in a row.

Stanford opened the scoring in the thirty-seventh minute of play and sent a message to the Deacons and the partisan crowed on hand that they meant business and intended to take advantage of their physicality when senior center back Tomas Hilliard-Arce decisively drove a header into the back of the net after receiving a cross out of a corner kick served in by sophomore midfielder Jared Gilbey.

That concluded the scoring during for the first half of play and the teams went into intermission with Stanford up 1-0 and the contest still clearly up for grabs.

Stanford pressed the attack and was able to take a 2-0 lead with a combination of passes that changed the point of attack and led to redshirt midfielder Sam Werner sending the rebound of his own shot into the back of the net in the fifty-third minute of play.  The goal was set up by a pass from senior midfielder Bryce Marion to senior forward Foster Langsdorf  who redirected the ball to Werner who finished it for the score.

The difference between winning and losing is often very slight and can hinge as this one did on which team is able to take advantage of their strengths.  Stanford did a good job of doing just that.

Wake Forest had a fourteen to twelve advantage in shots and had six corners compared to three for Stanford  but despite their efforts the Demon Deacons were never able to get the breakthrough goal that might have put Stanford on their heels defensively and taken them out of their game plan.

The Cardinal on the other hand was able to get into a rhythm on both sides of the ball and take advantage of the chances to score that came their way while remaining organized on the defensive side of the ball.  As a result Stanford was able to contain a very potent Wake Forest attack and forced the Demon Deacons to in effect chase the game most of the evening.

Nico Corti had five saves in goal for Stanford while Andreu Cases Mundet had three between the pipes for Wake Forest.

Wake Forest concludes another very successful season under the direction of Bobby Muuss with a 19-2-2 record.  Muuss stated, "Only one team ends the season with a win and unfortunately it's not going to be Wake Forest this year."  He added, "I told the guys we can look at this game as many times as we want.  At the same time, this game does not define this team.  This is a special group of young men"

Demon Deacon seniors  Jon Bakero, Luis Argudo, Steven Echevarria, Kevin Politz and Rafael Fagundo conclude an outstanding tenure in Winston-Salem during which they advanced to the Elite Eight in 2015 and 2017 and to the national championship match in 2016.

Stanford out of the Pac-12 Conference  improves to 17-2-2 and advances to the College Cup where they will face #5 seeded Akron.

Cardinal head coach Jeremy Gunn who is in his sixth season at the helm of the program, pretty much summed up the evening when he stated, "It boiled down to the fact that we created so many good chances and had a complete game."  He added, "Defensively we were rock solid at the back, kept the ball different spells and defended well when they had good possession."