Georgetown Will Be A FrontRunner Again In 2021 But They Do Have Several Big Shoes To Fill. 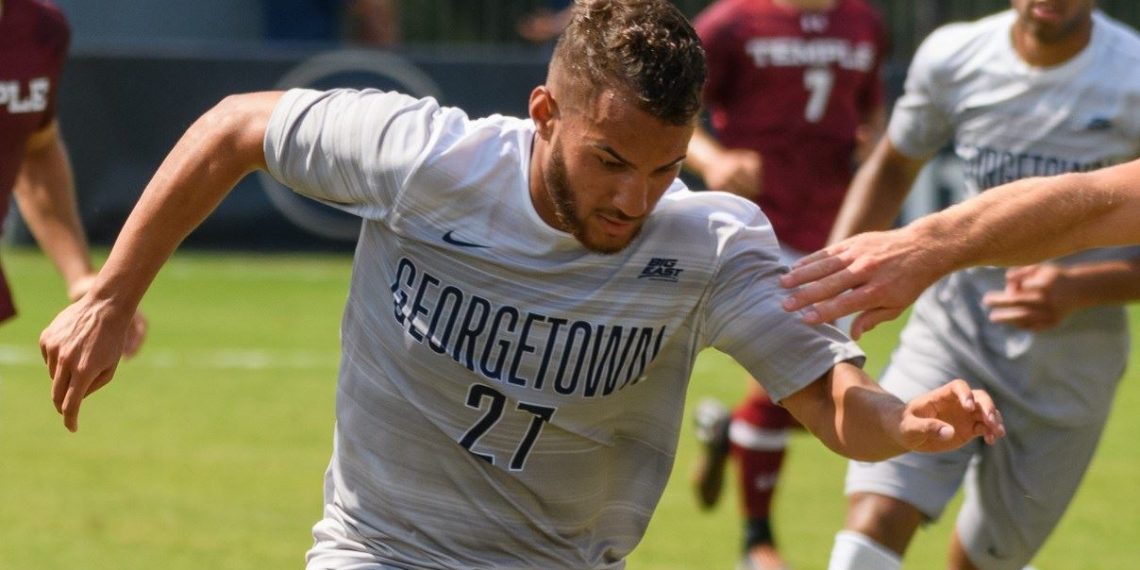 Hoyas return a solid group of players on both sides of the ball from the team that was 10-2-2 during the spring and advanced to the elite eight.

The Hoyas will need to fill the big play ability and stability that Jacob Montes, Derek Dodson and Paul Rothrock provided on the offensive side of the ball.

Brian Wiese stated, “The 2021 recruiting class is one that covers us across almost every position on the field.” He added, “Mike Casper and Connor Klekota have worked hard to help put together a group that will be expected to continue to evolve and grow our program, and to be great leaders on and off the field.”

Junior Dante Polvara (8g, 2a), Georgetown’s leading goal scorer last year, returns to be at the heart of the Hoya attack. Polvara had a breakthrough 2020-2021 season during which he was named an All-American by the United Soccer Coaches and College Soccer News and was the Big East Midfielder of the Year. Polvara not only led the Hoyas in scoring but also contributed to the offense with his playmaking ability. Polvara will be part of what looks to be a very talented and deep contingent of midfielders that will provide Brian Wiese with a lot of different lineup options. Seniors Zach Riviere (3g, 1a), Sean Zawadski who was a 2020 All-Big East Second Team selection, and Chris Le (1g, 0a), junior Aidan Rocha (1g, 1a) and sophomores Chris Hegardt (3g, 2a), Kyle Linahres (0g, 1a), Trevor Burns and John Franks are among other returning midfielders who will be in the mix.

Junior Will Sands (0g, 1a), a 2020 All-Big East Third Team selection and highly regarded sophomore Marlon Tabora Ponce (0g, 1a) are among returning players who will likely be counted upon to add punch to the attack up-top. Junior Stefan Stojanovic who transfers in from Saint Louis is among the newcomers who should be in the hunt for playing time up-top.

All-American senior Giannis Nikopolidis, the 2019 and 2020 Big East Goalkeeper of the Year and a three-year starter, returns in goal along with graduate student and team captain Ethan Koehler. There were games last year when the play of Nikopolidis in goal gave the Hoyas the edge they needed to prevail.

Returning backs include sophomore Kenny Nielsen, senior Joe Daltz, and sophomore Dominic De Almeida. The return of junior back Daniel Wu who missed the 2020 season due to injury is a big plus. Wu was a starter on the 2019 National Championship team as a freshman. Senior midfielder Sean Zawadzki who played in the back last year after Rio Hope-Gund departed to join the professional ranks is another option on the defensive side of the ball. Newcomers Maximus Jennings and Kieran Sargeant have the athletic ability and physicality to contend for playing time in the back.

Georgetown remained a very competitive team last year after midfielder Jacob Montes, forward Derek Dodson and defender Rio Hope-Gund departed during the later part of the season to take their game to the professional level. Nonetheless, as would be expected, the Hoyas were not as dangerous a team on the offensive side of the ball without the punch that Montes and Dodson provided. Both were former All-America team selections and four-year starters. Montes had fifteen career goals and 16 career assists while Dodson had 32 career goals and 14 career assists.

The silver lining, as it relates to the upcoming 2021 season, is that the early departures provided the opportunity for the Hoyas to get a head start and gain a little experience in regard to what life would be without the big play ability Montes and Dodson provided. One of the keys for Georgetown in 2021 will be their ability to establish an identity as a team early on that will enable them to maximize their individual talents and play to their strengths when facing different styles of play.

Talent and experience matter. The bottom line is that Georgetown will have enough of both to top most teams in 2021. Accordingly, they will again be the frontrunner and team to beat in the Big East and a contender on the national scene.

The Hoyas are at their best when they are able to settle into a rhythm and control the tempo of the match. There will be games when someone like midfielder Dante Polvara or goalkeeper Giannis Nikopolidis will be dominant but the measure of this team will ultimately be impacted by their ability to develop a balanced attack that will give them the ability to come up with the big goal needed and their ability to put in a full ninety minute shift on the defensive side of the ball when the level of their play or the style of their opponent limits their opportunities to score.

Stefan Stojanovic – Forward – Chicago, Illinois – Maine West High School – Junior transfer from Saint Louis where he scored a goal and two assists during 29 appearances in 2019 and 2020. Played in 12 games with three starts in the spring 2021 season and 17 games with eight starts in 2019. Played for the U-19 Sockers FC Academy where he scored 62 goals over five seasons. Member of the U.S. U-18 National Team.