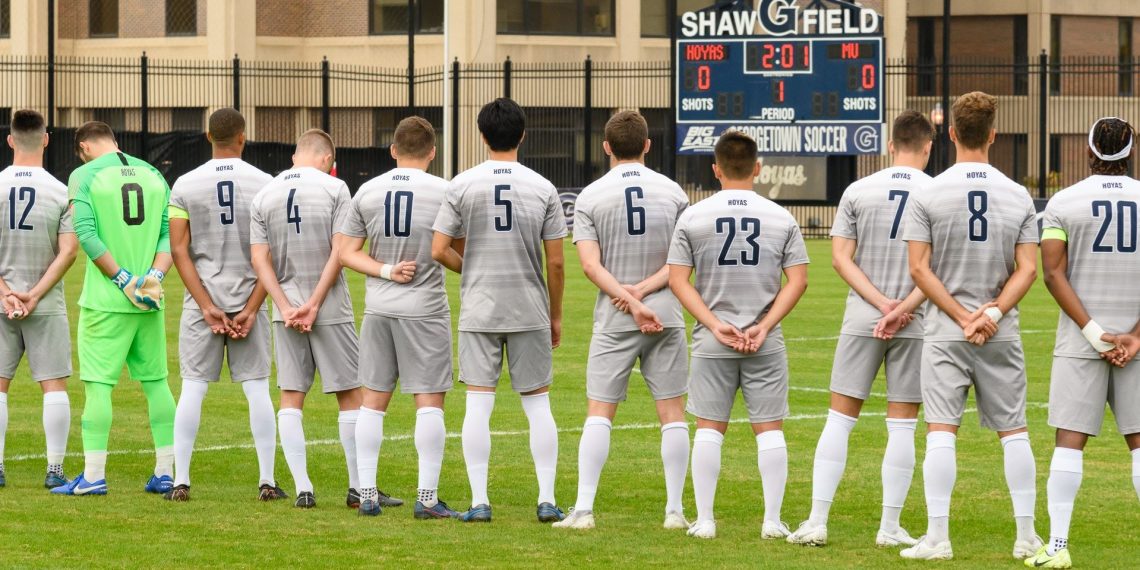 The Hoyas return a wealth of talent at every position and have added a top-notch recruiting class that should add depth and bodes well for the future of the program.

Departures and Gaps – The Hoyas will be without All-American back and Big East Defensive Player of the Year Dylan Nealis (4g, 5a) who was a four-year starter, forward Achara (6g, 5a) who was a 2019 All-Big East Second Team selection, forward Riley Strassner (1g, 0a) and midfielders Ethan Lochner (0g, 1a) and Austin Riddick due to graduation.

Opportunities for Improvement – Georgetown will enter the 2020 season with the momentum that accompanies winning a national championship and the big target on their chests that goes with it. Last year Georgetown did a really good job of staying  true to their system of play while making the adjustments needed to deal effectively with the different styles of play that they faced. Their ability to do that again in 2020 will be among the keys to the level of success that they experience.

Coach's Recruiting Class Comment – Brian Wiese stated, "We are really happy with this group of nine student-athletes. It is a big and talented class that is designed to be ready to take on the expectations and challenges of competing at a national level year in and year out." He added, "All nine of them are capable of contributing right out of the gate, which will make next Fall the most competitive team for playing time that I've had in my time at Georgetown. I love the character that these young men will bring to the program both on and off the field."

Summary – When we last saw the Hoyas, they were celebrating the program's first national championship in men's soccer, a 20-1-3 overall record, and the Big East Conference regular season and tournament titles. After Georgetown emerged on the national scene in 2012 when they advanced to the national championship game and had a nineteen win season, it seemed that it was just a matter of time before they took the next step and won a national championship. With that step now in the record books the focus moves to replicating the level of success that the 2019 squad achieved.

Georgetown will enter the 2020 season with a wealth of returning talent, the additon of a top notch nine member recruiting class, a ton of momentum and the very big target on their chests that comes with being the defending national champions.

The Hoyas had a deep rotation last year which served them well and gave them an edge as the season progressed. The Hoyas will again be a deep team in 2020 with high-caliber players a every position. Brian Wiese will again have a lot of lineup options. If you had to pick an area of concern it would be the void that exists on the defensive side of the ball due to graduation of team captains All-American and two-time Big East Defensive Player of the Year Dylan Nealis and forward Achara. Nealis was an impact player from the day he set foot on campus as a freshman and Achara, although hampered by injury, was an explosive finisher who added an addtional dimension to the offense anytime he was on the pitch.

Senior All-American forward Derek Dodson  (11g, 8a) who has powered the Hoyas attack for the past three years returns up-top along with junior Zach Riviere (4g, 2a). Dodson is a force on the offensive side of the ball and will be a tightly marked man. Accordingly, Riviere and others will need to add an additional dimension to the attack to keep oppoents from clamping down on Dodson. Marlon Tabora Ponce out of the Bethesda Soccer Academy is among the newcomers who could add additonal punch to the offense up-top.

The Hoyas will have plenty of options in the midfield, thanks to a solid core of returning linkmen and several new additions who will add depth and whose role will increase as they gain experience. A solid case can be made that from top to bottom the Hoyas will have the strongest midfield in the country in 2020.

Senior All-American and 2019 Big East Midfielder of the Year Jacob Montes (11g, 5a), who has been a starter for the past three seasons, returns to lead the way in the midfield. Montes is a playmaker and difference maker who adds balance to the attack in the middle of the park. Montes emerged as one of the top midfielders in the country last year. His big play ability was a big factor in Georgetown's success last year and will be again in 2020. Junior Sean Zawadzki, a 2019 All-Big East Second Team selection and 2020 captain (3g, 1a), who scored a goal and added an assist in Georgetown's 2-0 big semifinal win over Stanford in the 2019 College Cup, returns to add stability and grit to the midfield. Senior Paul Rothrock (4g, 7a) who transferred in last year from Notre Dame and made an immediate impact and senior Jack Beer (3g, 4a) return to add additional firepower and touch on the ball in the midfield along with sophomores Dante Polvara (4g, 2a), Will Sands (1g, 1a) and Aidan Rocha (0g, 1a) who now have a year of experience under their belts.

A solid core of backs return including senior and 2020 team captain Rio Hope-Gund (0g, 2a), senior Sean O'Hearn (0g, 4a), senior Foster McCune (3g, 1a) who may also be utilized as a midfielder, senior Chris Le, and sophomore Daniel Wu (1g, 0a) who had a banner freshman season. Hope-Gund, O'Hearn, and Wu were starters in the back last year along with Dylan Nealis. Newcomers Kenny Nielsen and Dominic De Almeida could push for minutes in the back.

Junior Giannis Nikopolidis, the 2019 Big East Co-Goalkeeper of the Year and a Big East First Team selection, and sophomore Tomas Romero, a College Soccer News 2019 All-Freshman First Team selection, who split time in goal last year return in 2020. While a goalkeeper rotation system is often problematic from a continuity and organization standpoint, it clearly worked well for Georgetown last year. Their return gives the Hoyas two very talented, composed, and battle tested netminders. Nikopolidis who hails from Athens, Greece had a 0.49 goals against average in twelve appearances last year while Romero who is from Cherry Hill, New Jersey had a 0.64 goals against average in twelve appearances.

Trevor Burns – Midfielder – Southborough, Massachusetts – Algonquin Regional – Played for the New England Revolution Academy where he was a four-year starter and team captain.

Kenny Nielsen – Defender – Irvine, California – University High School – Played for the Pateadores where he was a four-year starter and captain. Played with the U-15 and U-17 United States Youth National Team.