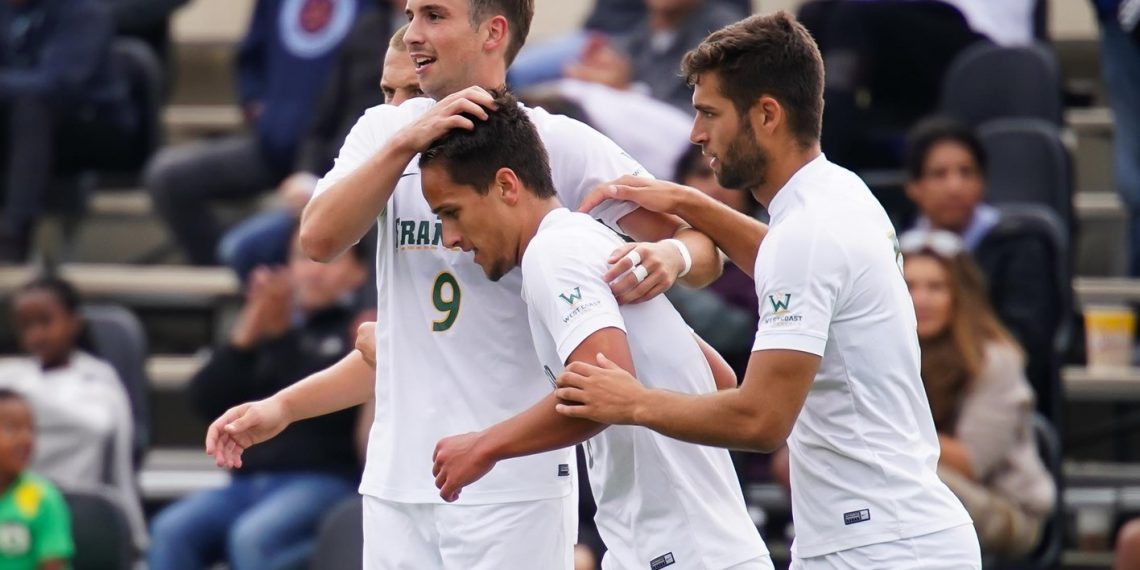 Kentucky and Louisville – Down goes Louisville.  A young Kentucky team made their presence known when they defeated in-state rival Louisville 3-0 in the Battle of the Bluegrass.  The Wildcats took control early when junior forward JJ Williams scored the first of his two goals in the fourth minute of play.  Kentucky came to play and never relinquished control of the contest.  Louisville seemed tentative and was never able to get their offense in gear.  Kentucky improves to 3-0-0.  The Wildcats take to the road for the first time this year when they open CUSA play on Saturday against UAB.  Louisville drops to 2-1-0.  The Cardinals begin ACC play on Sunday when they host a very competitive Duke team.

Stanford and San Francisco – The Cardinal return to the scene of the crime when they travel to face San Francisco on Friday night.  Two years ago, the Dons upset Stanford 2-1 before a standing room only crowd at Negoesco Stadium.  San Francisco was fired up from the get-go before an energetic home crowd.  Stanford came out flat that night and a determined San Francisco team took it to them.  The loss proved to be a wakeup call for the Cardinal.  Jeremy Gunn will have his team prepared to play.  Ditto that for San Francisco head coach Eddie Soto whose team comes into the contest off a confidence building 1-0 win over UCLA in Los Angeles.   The good news for Stanford is that they have allowed only one goal in three games.  The not so good news is that they have also only scored one goal in three games.  Midfielders Sean Bowman, Leon Schwarzer and Santiago Digiuseppe provide punch to the San Francisco offense.  This one looks to be a gut check match for both San Francisco and Stanford.

Denver and Colgate – These two ranked teams square off Friday night in Denver in what looks to be one of the more intriguing contests this weekend. This time last year Denver struggled in the early going against non-conference opponents because they were unable to come up with the big plays they needed to prevail.  That has not been the case this year.  The Pioneers are 4-0-0 with signature wins over Washington 3-2 in overtime and SMU 1-0 on the road.  Senior forward Andre Shinyashiki (5g, 1a) and senior midfielder Moshe Perez (1g, 3a) have powered a Denver attack that has produced seven goals while a stout Pioneer defense has allowed only two.  Colgate is a perfect 3-0-0 with wins over Pittsburgh, Albany and Hofstra.  The Red Raiders feature a balanced attack that includes five different players who have contributed a goal and a defense that has allowed only one goal to date.   Colgate plays together as a team as well as anyone in the country.

NJIT – The Red Flash are one of only eight teams with a 4-0-0 record heading into the weekend.  NJIT secured their fourth win by coming from two goals down to defeat Saint Francis 3-2 powered by a three-goal performance from redshirt sophomore forward Rene White.  White’s hat trick was the first ever for a NJIT player since the program began play at the Division I level in 2004.  The Red Flash will seek to keep their win streak alive when they travel to face Drexel on Saturday.

Wake Forest and North Carolina State – Something has to give in this one.  The number one ranked Demon Deacons will welcome the Wolfpack from N.C. State to Winston-Salem on Friday night in the ACC opener for both schools.  Wake Forest has a signature season opening 2-1 win in overtime against Indiana.  N.C. State has a signature win over Akron 2-0 on the road.  Both teams are undefeated with a 4-0-0 record.  Midfielders Bruno Lapa and Justin McMaster have been key ingredients in the Wake Forest offense.  The Wolfpack feature a balanced attack.  Both teams have impressive goalkeepers.  This is without a doubt one of the more interesting matchups this weekend.

Maryland and UCLA – Both of these programs are among the soccer elite but both are still searching for an identity this year.  The Bruins travel cross country to square off with the Terps on Friday night.  Maryland enters the contest with a 0-1-2 record.  The Terps are an attacking team as reflected in the fact that they have taken a total of thirty-five shots in three contests with seventeen of them on goal.  However, they have not been able to find the back of the net.  Chances are pretty good that the Terp attack will blossom soon.  Maryland’s schedule to date has been brutal. They opened the season with a loss on the road to Washington, returned home to tie Stanford 0-0, and then tied Virginia 0-0 at a neutral site.  UCLA is 2-1-0.  They opened the season with an impressive 4-0 on the road win over Coastal Carolina followed by a 2-0 win at home over San Diego 2-0 and an unexpected 1-0 loss at home to San Francisco.  This one will come down to which team is able to get into a rhythm on the offensive side of the ball.

UC Davis – The Aggies out of the Big West Conference are off to a solid 3-0-1 start that includes wins over Omaha, San Jose State and CSU Bakersfield and a tie with Creighton.  The Aggies will seek to enhance their record this weekend with contests on the road against Gonzaga on Friday and Oregon State on Sunday.  A balanced UC Davis attack has produced a total of seven goals to date including three goal performances against San Jose State and CSU Bakersfield in their last two games.  UC Davis will have to bring their A game to return home with two wins.

Drake – Keep an eye on the Bulldogs.  They appear to be gaining momentum.  Drake opened the season with a disappointing 1-0 loss in overtime to Oral Roberts in a contest in which they were unable to finish the scoring opportunities that came their way.  They corrected that and rebounded to top Butler 2-1, UIC 3-1 and UMKC 3-1.  Drake hosts DePaul on Friday and travels to face Western Michigan on Sunday.

Oakland and UIC – Oakland and UIC square off Saturday at the Oakland Soccer Field in a contest that has huge implications in the Horizon League regular season race.  Oakland is 3-0-1.  The Golden Grizzlies have won three in a row after opening the season with a 1-1 tie with Western Illinois.  Oakland will come into the contest with UIC off an impressive 6-1 win over a good Loyola Chicago team.  UIC is a solid 3-1-0 with wins over Campbell, Providence and Western Illinois and a loss to Drake.  Senior forward Max Todd has scored four of the seven goals that UIC has placed in the back of the net.  No prisoners will be taken in this one.

Virginia Tech and Virginia – This interstate rivalry and ACC matchup will take place on Friday in Charlottesville.  Virginia Tech is 3-0-1.  The Hokies began the season with wins over Air Force, Gardner-Webb and South Florida.  They tied UCF 2-2 on the road in their last contest.  Virginia comes into the match with a 1-0-1 record.  The Cavaliers topped New Hampshire 1-0 and tied Maryland 0-0.  Since Virginia Tech joined the ACC is 2004, Virginia has an 8-2-4 advantage over the Hokies in ACC regular season play.

High Point University – The Panthers scored three goals in the second stanza to come back from a 2-0 deficit on the road to defeat UNCG to improve to 4-0-0.  Junior Ilias Kosmidis scored once and junior Bana Ganidekam twice to power the comeback.  HPU will seek to up their win total when they host Elon on Saturday.  They will need to put together a full ninety minutes of play in order to do that.

Grand Canyon University – The Lopes out of the WAC opened the season with a 2-1 win over Wisconsin and a 1-0 win over Creighton.  They hope to keep what has been a magical early season to date alive when they travel to tangle with Evansville on Friday and SIUE on Sunday.  The key for GCU looks to be taking it one game at a time.  Head coach Schellas Hyndman knows what it takes to win and is doing a great job of putting in place a solid foundation upon which a winning tradition can be built at Grand Canyon.

Mercer – The Bears out of the Southern Conference are off and running with a perfect 4-0-0 start with wins on the road over North Florida 2-1, Jacksonville 4-0, Winthrop 2-0 and Gardner-Webb 4-2.  Mercer puts their unbeaten status on the line when they travel to Peoria to face Missouri State on Friday and Eastern Illinois on Sunday in the Bradley Invitational.  Mercer has a high octane and balanced offense that has produced a total of twelve goals and a defense that has only allowed three.

Butler and UC Santa Barbara – Neither team has had the season to date that they wanted.  UCSB opened the season with wins over St. John’s and UC Riverside but then came out on the short end of contests with Portland 1-0 and Seattle 2-0.   Butler is a disappointing 1-2-1.  The Bulldogs have a 2-2 tie with Akron, a win over Western Michigan and unexpected losses to Drake and Columbia at home.  A victory in this one will provide a building block for the winning team.

Rhode Island – The Rams are 4-0-0.  They have not allowed a goal while securing wins over Boston University 2-0, Bryant 1-0, Penn State 1-0, and Holy Cross 3-0.   Senior midfielder Dominik Richter (1g, 4a) has been the catalyst in a balanced Rhode Island attack.  A rock-solid Ram defense anchored by backs Sondre Karterud, Peder Kristlansen, Niklas Middrup and Tyler Dickson has allowed a total of only thirteen shots on goal in four games.  Freshman Roger Penske and junior Stefan Schmidt have been productive in goal.   Rhode Island travels to face Marist on Saturday and Connecticut next Tuesday.