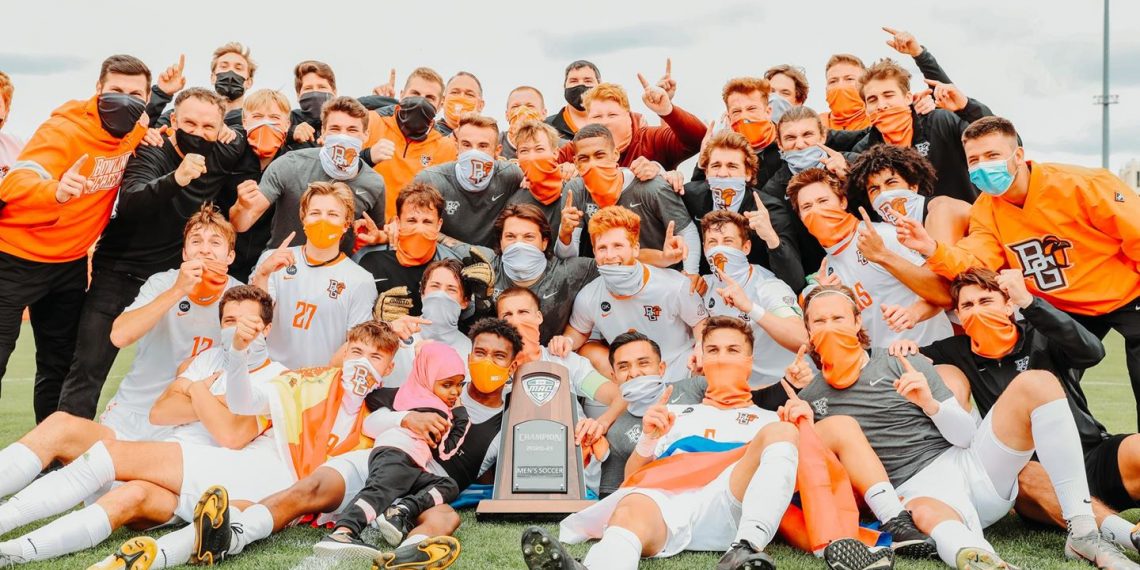 The falcons have several significant gaps to plug heading into the 2021 season due to departures but players are on board who are Ready to fill them.

Forward Chris Sullivan (4g, 5a) who led BGSU in goals, assists and points for two-straight seasons, defender Achille Robin who played every second of every match for the past two seasons, and midfielder Vinny Worner (1g, 2a) who was a three-year starter. Sullivan and Robin were All-MAC First Team selections and United Soccer Coaches All-North Region Second Team members.

A big test for BGSU in 2021 will be developing reliable options to replace the big play ability that forward Chris Sullivan provided on the offensive side of the ball.

Eric Nichols stated, “Each of the young men in this class bring unique soccer attributes that we are excited to add to our team. But as different as they are on the field, they all share the same high character and drive to succeed.”

It is not clear who is going to carry the load on the offensive side of the ball. Pulling off back-to-back MAC championships will require several of the returning players or perhaps one or two of the newcomers to take their game up a notch or two in terms of offensive productivity.

Senior defender Jacob Erlandson (3g, 2a) who is a threat out of set pieces, sophomore defender Kyle Cusimano (2g, 1a) and junior midfielder Nathan Masters (2g, 1a) are the only returning players who scored last year. Senior center midfielder Zach Buescher, a 2020 and 2019 All-MAC Second Team selection and three-year starter, and senior forward Roberto Fernandez Garrido are among other returning players who could provide offensive punch. Senior captain Jensen Lukacsko (0g, 1a), a three-year starter, and senior Kale Nichols (0g, 1a), a two-year starter, will add stability and help set the pace in the midfield.

Senior midfielder Sergi Martinez who transfers in from Hartford where he was a three-year starter and redshirt freshman midfielder Alberto Anaya who enrolled during the Spring 2021 semester but was not eligible to compete are among the newcomers who have the potential to add an additional dimension to the attack.

Junior Logan Kowolczyk, an All-MAC Second Team selection with a 0.80 goals against average during the 2020-2021 season, returns to anchor a Falcon defense that limited opponents to a total of 12 goals. Senior center back Jacob Erlandson, an All-MAC First Team selection who transferred in last year from Huntington University where he was an NAIA All-American, is a prime timer who made an immediate impact on both sides of the ball. Erlandson will be joined by sophomore defenders Kyle Cusimano and Joey Akpunonu and junior back Michael Montemurri.

The Falcons have reason to feel good after what they accomplished during the Spring of 2021. Bowling Green is coming off a season in which they were 7-5-1, won the MAC regular season title outright for the first time since 1996, and earned a spot in the NCAA Tourney field for the first time since 1997. The makeup of the 2021 squad is somewhat different than the 2020-2021 team but BGSU’s recent track record under Eric Nichols provides reason for optimism heading into the 2021 season.

The departure of forward Chris Sullivan, midfielder Vinny Worner and defender Achille Robin hurts but enough experienced talent returns along with several newcomers who have the potential to hit the ground running to keep the Falcons in the hunt for the MAC title. The Falcons look to be very solid down the spine with goalkeeper Logan Kowalczyk, center back Jacob Erlandson, and midfielders Zach Buescher and Jensen Lucacsko providing a very solid nucleus upon which to build.

BGSU returns eight starters but they do not return a dominant goal scorer. The defense may have to be stout in the early going in particular to compensate for an offense that may take time to jell. Much will likely hinge on whether or not this team can develop the big play ability that they will need on the offensive side of the ball to prevail. If the offense makes tangible strides and the defense is solid then the Falcons could be very good by the time they begin conference play. Tough nonconference contests in September against the likes of Michigan State in East Lansing, Marshall at home, FIU at home and Ohio State in Columbus will test the mettle as well as the skill of the Falcons prior to beginning MAC play in October.

Sergi Martinez – Midfielder – Barcelona, Spain – Eugeni Xammar – Senior transfer from Hartford where he was a three-year starter and 2020 America East All-Second Team selection. Scored three goals and contributed one assist in the 2020-2021 season.

Jacob Bergin – Midfielder – Cleveland, Ohio – Rocky River High School – Played for DC United, Cleveland Force and Internationals. U-14 Boys National Team call-up. Jointed the program in for the Spring 2021 semester but was not eligible to compete in matches during the spring.