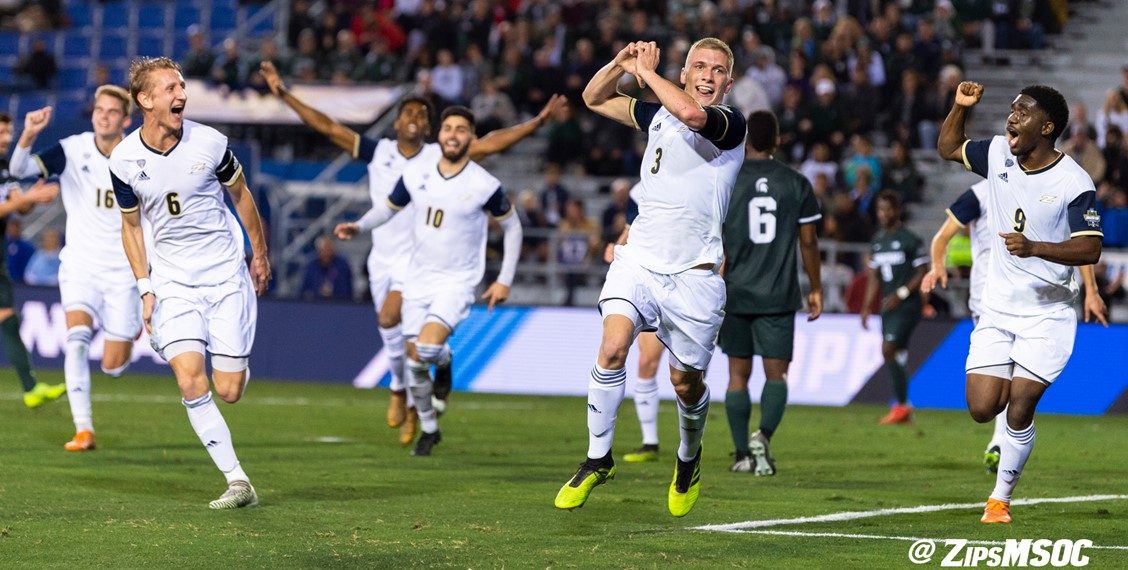 Akron will be without a number of key players from last season's squad but Jared Embick still has enough top talent returning on both sides of the ball to again be a force in 2019. In January, Akron announced a four-member early 2019 signing class.

Departures and Gaps – Akron will be without the services of six solid seniors from the 2018 team as well as highly productive forward Marcel Zajac (11g, 8a) who elected to forgo his senior season to enter the professional ranks. Zajac was the straw that stirred the Zip attack down the homestretch last year with nine of his eleven goals coming in postseason play. Departed seniors include forward Ezana Kahsay (4g, 5a), midfielders Morgan Hackworth (4g, 5a) and Marco Micaletto (1g, 5a), defenders Abdi Mohamed (1g, 5a) and Joe Korb and goalkeeper Ben Lundt who was a three-year starter.

Opportunities for Improvment – Akron started slow last year with a 1-3-1 record in their first five contests but they jelled as a team and gained momentum as the season progressed.  The Zips peaked as a team at the right time last year with a nine match winning streak that carried them to the College Cup Final.  With a lineup that included five freshman in key roles lin 2018, the Zips had a learning curve in the early going.  The experience the current sophomores gained last year should enable Akron to hit the ground running in 2019 without a freshman learning curve.

Summary – Akron reloads as effectively as any team in the country. Figuring out how to replace the gusto and punch that Marcel Zajac brought to the attack and the stability and experience that Ben Lundt brought to the defense in goal look to be among the primary tasks facing Jared Embick and his staff heading into the 2019 campaign.

Junior David Egbo (13g, 5a) who had six game-winners last year returns to power the attack up-top. Egbo, a 2018 United Soccer Coaches and College Soccer News All-American, has plenty of moves along with the quickness and experience needed to cause problems for opposing defenders.  A solid necleus of midfielders return led by redshirt senior Skye Harter, a 2018 All-MAC First Team selection with two years of starting experience under his belt, redshirt junior Diogo Pacheco (5g, 2a) and sophomores Sam Tojaga (0g, 3a) who was a 2018 All-MAC Second Team selection and Colin Biros (3g, 4a) and senior Christian Lue Young.

Sophomore center back Carlo Ritaccio (3g, 0a) who was a 2018 All-MAC Second Team selection and a College Soccer News First Team All-Freshman Team honoree returns to anchor the backline along will fellow sophomores Marco Milanese (1g, 2a) and Pol Hernandez (0g, 1a) who were also starters last year. Senior Leonard Sohn who appeared in eight contests with five starts last year before being sidelined with injuries, rock solid junior Daniel Strachan who has been a starter for the past two seasons, and redshirt sophomore Declan Watters round out what should be a very deep and now experienced Akron backline. Redshirt junior Tor Saunders who starterd two contests last year, redshirt freshman Ricky Ceballos, and freshman Grant Abbott are among the goalkeepers who will seek to secure the crucial starting role between the pipes.

When it is all said and done, Akron's ceiling in 2019 will depend in large part on its ability to replicate the spark that Marcel Zajac brought to the attack and the stability that Ben Lundt provided in goal, the emergence of someone to join with David Egbo to apply pressure to opponents up-top, and the bump in play and level of hunger for continued success of the sophomores who now have a year of experience under their belts.

Early season contests at home against Stanford and on the road with Xavier, Creighton, Maryland, and Pittsburgh will give Jared Embick a pretty good indication of the strengths, weaknesses and the grit of the 2019 version of his team.