Women’s College Soccer. Florida State And Duke Face Each Other In The Elite Eight. 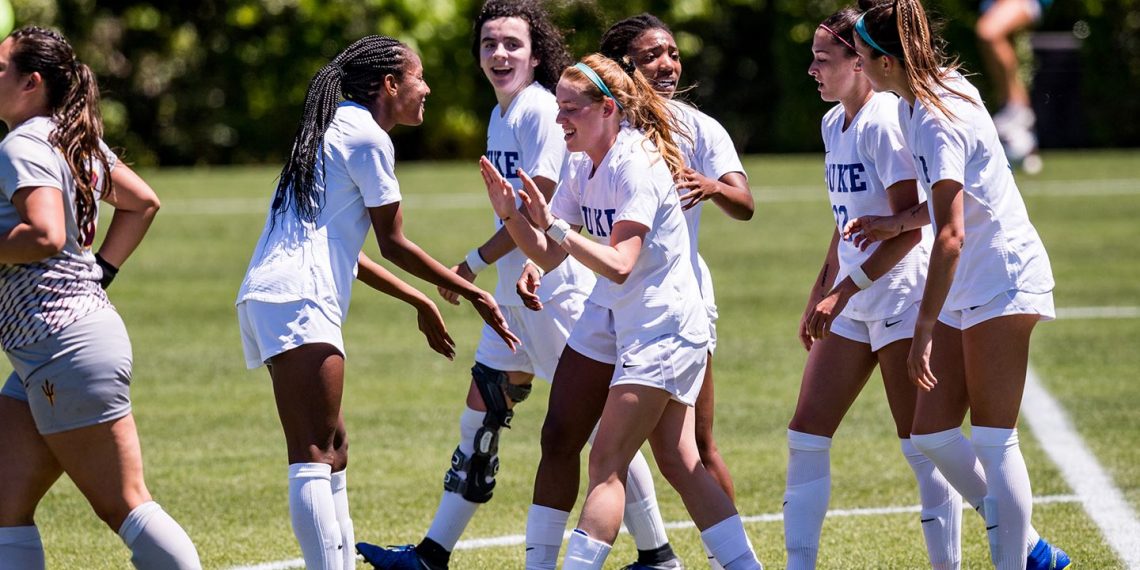 Can Number One Seed FSU Win It All? Can Duke Pull Off The UpsEt?

Florida State – There are a lot of storylines relating to this FSU team. After completing the fall 2020 season with a perfect 11-0-0 record and ACC Tournament championship, FSU took an unconventional approach during an unconventional spring season by preparing for the NCAA Tournament with a highly competitive slate of contests against non-collegiate opponents. Its hard to argue with that decision after two very impressive wins in the NCAA Tournament over Milwaukee 3-0 and Penn State 3-1.

Contests are often closer than the score would indicate but in both the win over Milwaukee and the win over Penn State the opposite was true. The score was not reflective of just how dominant FSU was. In the contest with Milwaukee the Noles had a 20 to 0 advantage in shots. In the match with Penn State FSU had a 32 to 2 advantage in shots. The Nittany Lions did score first to take a brief lead possibly establishing that FSU is vulnerable but at this point in the NCAA Tourney it looks like the only team that can beat FSU is FSU.

Yes, of course, the Noles have to bring their “A” game to win at this level in the NCAA Tournament but FSU looks to be a team on a mission and the mission is to win the national championship. Anything less than a national championship will be a disappointment for Florida State. That type expectation can be a burden for some teams but this is a confident FSU team, a group that is down to earth, enjoys playing the game, and competing. Also, it is highly unlikely that FSU will become complacent or take any opponent for granted under the guidance of head coach Mark Krikorian and his staff.

FSU will be facing Duke for the third time this season. Conventional wisdom is that it is difficult to beat a talented opponent, and Duke is a talented opponent, three times in a given season. That factor makes this Elite Eight matchup interesting. FSU beat Duke 1-0 back on October 29 in Tallahassee with midfielder Jaelin Howell providing the game-winner in the last minute of regulation. FSU also topped the Blue Devils 4-0 in the semifinals of the ACC Tournament in a contest in which the score was not really an accurate reflection of the difference between the teams. FSU took charge of the contest in the second half but overall Duke actually had a 10 to 8 advantage in shots on goal for the evening.

FSU has a very balanced offense with six players who have contributed four or more goals. Midfielders Clara Robbins (6g, 6a) and Jaelin Howell (5g, 2a) and forwards Leilanni  Nesbeth (5g, 3a) and Jenna Nighswonger (4g, 5a) are among those who power a multi-dimensional attack.

Their defense anchored in goal by freshman goalkeeper Cristina Roque has only allowed a total of seven goals. It is difficult to find a weakness on this FSU team. If there is any question it would be the gap that exists due to the decision of center back Malia Berkeley to enter the professional ranks at the conclusion of the fall 2020 season. Berkeley, the 2019 and 2020 ACC Defender of the Year and a four-year starter, is not the type of player that is easy to replace.

Duke – The Blue Devils advanced to the Elite Eight by topping Arizona State 2-1 in overtime followed by a 1-0 win over Mississippi. Sophomore midfielder Sophie Jones netted the game-winner in the win over Arizona State. Senior back Caitlin Cosme’s header out of a corner kick served in by senior midfielder Tess Boade in the third minute of the match gave Duke the edge they needed to top Ole Miss.

Boade (6g, 3a), Cosme (6g, 1a) and freshman forward Olivia Migli (6g, 0a) are among the big producers on the offensive side of the ball for a Duke team that has scored a total of 32 goals while their defense anchored in goal by sophomore Ruthie Jones has allowed a total of 17.

When Duke scores first they have been a very difficult team to beat. Duke’s signature win so far is a 1-0 win over Clemson back on October 4. This is a very competitive Blue Devil team but with two losses to FSU and two losses to North Carolina in the fall 2020 season and a 3-2 loss to West Virginia during the latter part of the spring season they have yet to come up with a really big win over a top ten team.

Prognosis – The obvious first question is whether or not the Duke backline of seniors Mitchell Taylor (0g, 2a) and Caitlin Cosme (6g, 1a), junior Delaney Graham and freshmen Emily Rouse and Katie Groff along with redshirt senior defensive midfielder Mia Gyau can contain a high-octane FSU offense.

A huge contributing factor in that regard will be whether or not Sophie Jones, Tess Boade, Maggie Graham and Lily Nabet can hold their own in the middle third and prevent an FSU midfield powered by the likes of Clara Robbins and Jaeline Howell from dominating possession.

There is a lot of truth in the old axiom that the best defense is a good offense. That means that Duke will have to apply sufficient pressure on the offensive side of the ball in order to hamper FSU’s ability to push numbers forward and place Duke under constant pressure.

Duke is not the type of team that will sit back and try to pack the back but the Blue Devils, who have posted nine shutouts this season, have to remain organized on the defensive side of the ball and not allow FSU to create space and seams that they are able to exploit.

Don’t count Duke under head coach Robbie Church out of this one but they will have to play their best game of the year on both sides of the ball to top FSU. Duke’s chances of an upset increase significantly if they are able to score first and settle into a more controlled pace but if they have to play from behind and chase an opportunistic possession-oriented but also patient FSU team the Seminoles will control the pace and the contest.