Men’s College Soccer. A Look At The Elite Eight Games And A Prediction Of The Outcome. 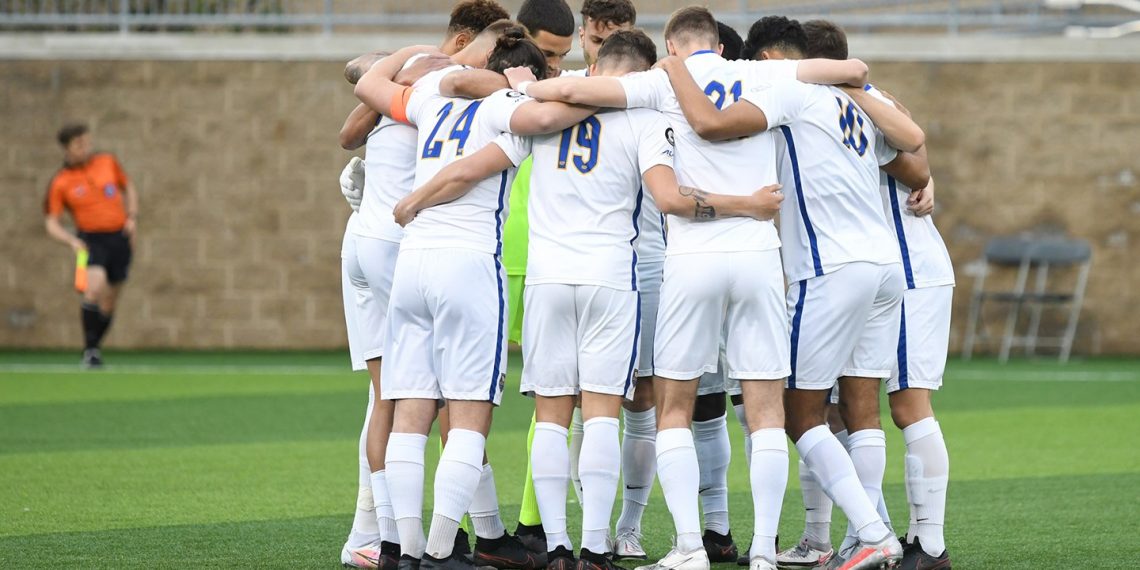 A Trip To The College CUp (Final Four) Is At Stake. By Brian Ludden

Marshall pulled off the biggest upset of the tournament when they upset number one seed Clemson in the Sweet Sixteen. The Herd prevailed 7-6 in penalty kicks after the contest was tied 1-1 at the end of 110 minutes of play. As a result, Marshall will have momentum heading into the programs first ever appearance in the quarterfinals of the NCAA Tournament.

But standing in their way will be the defending national champions, Georgetown. The Hoyas punched their ticket to the Elite Eight by defeating a skilled Penn State team 3-2 in the Sweet Sixteen.

Georgetown is the favorite in this one, but after knocking off the top overall seed, anything is possible for this Marshall team. Georgetown has the advantage of experience which can make a difference particularly in the early going of a contest when miscues resulting from pressure can set the pace for an entire match. The Hoyas are no stranger to Elite Eight play having knocked off Washington 2-1 in the Elite Eight in 2019 to secure a spot in the College Cup in route to winning the national championship.

Georgetown is at their best when they are able to settle into a rhythm that enables them to maintain possession and persistently apply the pressure necessary to create opportunities that they can exploit. If the Hoyas get in gear, they are difficult to top. The potential exists for this to be a physical contest. If so, Georgetown’s productivity will be impacted by their ability to not allow the physicality of the contest to hamper their balance and ability to settle in and dictate the flow and pace of the contest.

Midfielders Dante Polvara (8g, 2a), Chris Hegardt (3g, 2a), Paul Rothrock (2g, 4a) and Zach Riviere (3g, 1a) are the catalysts in Georgetown’s offense. Junior Giannis Nikopolodis anchors a Hoyas defense that has only allowed a total of nine goals.

Marshall has done a good job this year of finding a way to win the close contests which is a plus in the one and done environment of the NCAA Tournament. Forwards Victor Diaz (6g, 4a), Milo Yosef (4g, 3a) and Jamil Roberts (2g, 5a) are all dangerous goal scorers but it is in noteworthy that in ten of Marshall’s contests they have only scored one goal or less. Their two setbacks are a 2-1 loss to Akron in overtime and a 1-0 loss to West Virginia. Junior goalkeeper Oliver Semmie anchors a very capable Marshall defense that has only allowed a total of eight goals while posting eight shutouts.

The Thundering Herd is a formidable opponent. Clearly one that is capable of another upset if Georgetown is unable to settle in and play their game. Look for Georgetown’s big game experience, depth and overall talent to give them the edge they need to prevail.

Washington and Pittsburgh both easily advanced to the quarterfinals.  Pittsburgh has been the more dominant of the two teams, thrashing Monmouth 6-1 in the second round before a somewhat surprising 4-0 win over UCF in the third round.  Washington, on the other hand, hasn’t been as dominant, but has still advanced to the quarterfinals comfortably.  After a 2-0 win over Grand Canyon in the second round, the Huskies defeated Missouri State by the same score line on Thursday afternoon.

It’s hard to tell who is the clear-cut favorite in this matchup between teams from the ACC and Pac-12. Both have had banner seasons. Pitt finished in the number two spot in the ACC behind overall number one seeded Clemson and Washington in the number two spot in the Pac-12 behind overall number four seeded Stanford. Both of whom ironically saw their season come to an end when upset in the Sweet Sixteen.

Number two seeded Pittsburgh has a high-powered attack that easily dismantled both of their previous opponents in the tournament.  No offense to Monmouth or UCF, but Washington with a defense anchored by sophomore netminder Sam Fowler and backs Charlie Ostrem, the Pac-12 Defensive Player of the Year, Ryan Sailor and Kendall Burks among others will likely prove to be a more difficult challenge for Pittsburgh to breakdown.

This one will definitely be an exciting matchup, in part because it features two of the best midfields in the country in a something has to give confrontation. The battle for possession and control in the middle third between a Washington midfield that includes Dylan Teves, Christian Soto and Lucas Meek and a Pitt midfield that includes Noel Valentine, Veljiko Petkovic and Walti Jackson will be fierce. Don’t be surprised if this one ends up being decided by a penalty kick shootout (and who doesn’t love a little extra drama).

Another upset on Thursday was the Tar Heels of North Carolina knocking off the Pac-12 champions Stanford 1-0 in the Sweet Sixteen thanks to a goal from defender Joe Pickering in the early stages of the contest and a solid and well organized Tar Heel defense anchored by junior goalkeeper Alec Smir.

The Tar Heels opened the NCAA Tourney by advancing past Charlotte in penalty kicks after the contest was tied 1-1 at the end of regulation and overtime. North Carolina now faces another in-state foe and a team that they are very familiar with in Wake Forest.

The Demon Deacons punched their ticket to the quarterfinals by defeating Coastal Carolina 3-2 and Kentucky 2-1.

In the previous meeting between Wake Forest and North Carolina in Winston-Salem back on October 18, Wake Forest prevailed 1-0 in overtime with forward Kyle Holcomb providing the game-winning goal after receiving a cross from midfielder Omar Hernandez. The Demon Deacons had an 8-6 advantage in shots in that contest and limited the Tar Heels to only one shot on goal.

It’s easy to say that Wake Forest is the favorite and should be able to win, but don’t count out North Carolina. The Tar Heels are tenacious on the defensive side of the ball as reflected in their 1-0 win over a very talented Stanford team and the fact that they have only allowed a total of nine goals against a very competitive slate of opponents.

Both of these teams will attack but in a cautious manner. Miscues on the defensive side of the ball will be costly. This one is going to be a game of opportunity. In other words the team that is able to take advantage of the limited number of shots on goal that come their way will prevail. It could be decided by a single big play created out of a set piece or the return of a rebound into the back of the frame.

Wake Forest is as good as any team in the country at knocking the ball around, maintaining possession, and finding space that they can exploit. Wake Forest and North Carolina will both seek to open the field of play by attacking down the flanks, getting numbers forward, and switching the point of attack to find a seam they can exploit. Both of these teams are very familiar with each other and their style of play. Both coaches, Wake Forest’s Bobby Muuss and North Carolina’s Carlos Somoano, will have their teams prepared to play.

UNC forward Gio Montesdeoca (4g, 2a) is a very good finisher with the ball at his feet in the attacking third but this is not a highly productive UNC team in terms of goals scored. As a result, the Tar Heels have a small margin for error.

Forward Kyle Holcomb (6g, 1a) and midfielder Omar Hernandez (4g, 2a) are among those who add punch to a potent Wake Forest attack. Both Holcomb and Hernandez are capable of taking over a game.  However in matchups like this it is often someone unexpected who comes up with the big play that proves to be the difference maker.

We can hope that this one will also go to overtime like the previous matchup, and maybe penalties to provide that little extra drama that we all love.  North Carolina will look to pull off another upset and advance to the College Cup, but Wake Forest will likely prove to be a very tough test. Neither of these teams wants to fall behind early and have to chase the contest. This one could come down to the very last seconds, but expect Wake Forest to hold on and advance to the last four.

After knocking off Georgetown in the Big East championship, Seton Hall defeated Air Force 2-1 in the second round, and then prevailed on penalty kicks versus Virginia Tech on Thursday.  Indiana survived a scare against upset-minded St. Francis (Brooklyn) in the second round before prevailing 3-1 in penalty kicks.  In the third round, two goals in a ten-minute span in the second half gave the Hoosiers a more difficult than expected come-from-behind 2-1 win over Marquette to advance to the quarterfinals.

This is another matchup that is hard to tell who the favorite is, but many people believe that defense wins championships.  Indiana has only allowed five goals over the span of this season, allowing an average of .33 goals per game.  On the other hand, Seton Hall has allowed 14 goals in 15 games this season. This is a very competitive and confident Seton Hall team as reflected in their gutsy signature win over Georgetown in the final of the Big East Conference Tournament.

We can anticipate another close matchup here, where one mistake on defense or an individual moment of brilliance can decide who stays in North Carolina and advances to the College Cup and who goes home.  This will be an entertaining game between two teams who have hopes of winning it all.

The game is up for grabs but it is hard to not go with an experienced and tested Indiana team that has a tradition of winning and is unbeaten in their last ten games. On the other hand, Indiana is going to have to put together a much more complete game than they did against St Francis Brooklyn and Marquette in order to advance past Seton Hall.

Forward Victor Bezerra (12g, 3a) has been the main-man in an IU attack that has several very capable finishers. Sophomore Roman Celentano, the 2020-2021 Big Ten Goalkeeper of the Year, is among the best shot stoppers in the country.

Forward CJ Tibbling (7g, 3a) and midfielder James Boote (0g, 9a) are the catalysts in Seton Hall’s attack. Senior Andreas Nota gives the Pirates a very capable and talented presence in goal. Win, lose, or draw, this has been a breakthrough year for Seton Hall.