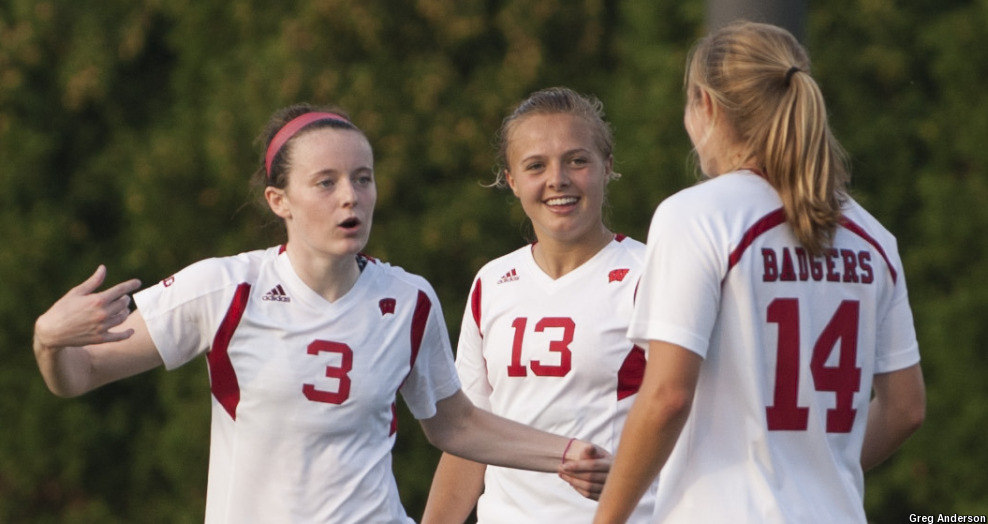 Wisconsin is a program on the rise.

The Badgers continue to climb up the NSCAA Division I Top 25 —  No. 9 this week — and players are collecting plenty of early season accolades.

UW is off to its best start in season history at 6-0-0 following a pair of shutouts over Washington and Portland on the road last weekend, and has outscored foes 18-1 in the first six contests.

“We have people scoring goals up front and we have a good defense – we’ve only given up one goal,” head coach Paula Wilkins said. “I think that combination helps. People talk about the scoring, but I think how the team has bought into defending has made us able to eliminate a lot of opportunities and create chances on the other side.”

Just a few months ago, things weren’t looking so rosy for the Badgers. UW turned in a disheartening 10-7-2 record last year and exited the Big Ten Tournament following a first-round loss to Penn State, which ended the team’s season.

The Badgers were disappointed in themselves after the 2013 campaign so the seniors went to Wilkins and took it upon themselves to change the team’s focus and core values.

“We always knew we had the talent and that it was just a matter of doing everything right. That’s what we did all spring and summer, and now it is paying off,” senior Cara Walls said. “We focused on always staying positive and trying to empower each other as often as possible. We want to build each other up – I think that really helped.”

Wisconsin’s goals throughout the non-conference part of the schedule were to stay healthy and have teams expose their weaknesses so the squad could improve heading into Big Ten play.

“That’s been our focus going into the weekend,” Wilkins said. “The one thing you can’t prepare for is that Big Ten opponents know you because they’ve been playing against us for so many years. There’s a lot more on the line for conference play.”

The Badgers will open league action at Michigan State, which also boasts a perfect 6-0-0 mark heading into the weekend. The game will be broadcast live on the Big Ten Network at 3:30 p.m. Wisconsin will face Michigan (4-2-0) on Sunday – a team that has been at or near the top of the Big Ten standings in recent years.

“I’ve been here for four years,” Walls said. “I know there are no easy games. I’m hoping to be a leader and let the girls know they have to fight for every game.”

With the early attention, Wilkins knows her squad will not be sneaking up on anyone this season – and so does her team.

“It’s harder sometimes because you get everybody’s best game,” Wilkins said. “Winning the first six games changed our image. This is the first time our players are really dealing with that, but at the end of the day we can only control what we can do.”

“I think we’ve been teetering on the edge of being a good team, but this group of girls is really determined to change the program and set a new standard for Wisconsin women’s soccer,” Walls said.

The most anticipated match-up of the week is undoubtedly No. 7 Florida at No. 4 Stanford on Friday at 7:30 p.m. PT. It will be the fifth time the Cardinal will face a ranked opponent this season. The two programs have not met since 2001. Stanford has reeled off five straight shutouts to start the season, stretching its scoreless streak to 489:35 dating back to last season. Last weekend, the Gators ended Florida State’s 37-game unbeaten streak.

No. 7 Texas Tech earned its highest ranking in school history following a 5-0 start and will put its perfect record on the line at No. 11 California on Friday at 3:30 p.m. The game is set to air live on Pac 12 Networks. Junior midfielder Hannah Devine, the reigning Big 12 Offensive Player of the Week, ranks second in the league for goals. Cal is 6-0 for the first time since 2000 – the same year the Bears posted a program-best 17 wins.

Auburn cracked the NSCAA Division I Top 25 at No. 18 on the merits of a five-game winning streak. The ranking is Auburn’s first since August 2012. Ten different players have scored a goal for the Tigers, including Logan Beal, who leads the team with three tallies. Auburn looks to stretch the streak this weekend when the Tigers host Samford and Milwaukee.

DePaul also joined the Top 25 at No. 21 after setting a program record with six consecutive victories. Abby Reed has fueled the Blue Demons’ early fire with a nation-leading four game-winning goals. DePaul tries to extend the streak against Green Bay on Thursday.

Maryland will host No. 25 Rutgers on Friday as the two programs kick off their inaugural seasons of Big Ten action. Rutgers is 8-14-3 against Big Ten foes before this season, but has won its last three contests against league opponents. However, Maryland leads the series with the Scarlet Knights, 1-5-1, including a 1-0 victory in the last meeting in 2005.

SIDEKICKS:East Tennessee State is the top-scoring team in the nation, averaging 5.0 goals per game. Sophomore defender Hannah Shortand sophomore forward Simona Korenare tied for the NCAA lead with nine goals each. The Bucs are 6-0-0 … Kansas is 6-0-0 for the first time since 2004. The Jayhawks have yet to trail in a game this year – a streak of 452 minutes … No. 3 Virginia Tech leads the ACC with 24 goals. Twelve different players have scored for the Hokies … Temple is off to the best start in school history at 5-0. The Owls are riding their first five-game winning streak since the 2000.

Amy Farnum Patronis covers women's Division I college soccer for College Soccer News.  She can be reached at amyfarnum@yahoo.com