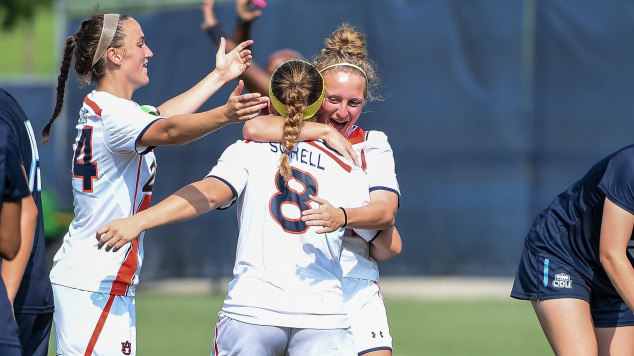 Two schools — Auburn and Rutgers — are off to the best starts in their programs’ histories (6-0-0) thanks to season-opening scoreless streaks in 2015.

Auburn and Rutgers are two of just four teams in the nation yet to allow a goal. Arizona State (3-0-0) and Cornell (3-0-1) are also on that list.

Auburn jumped two spots to No. 9 in the NSCAA Division I Top 25 after the Tigers extended their shutout streak to a school-record six games. It is the highest ranking in program history. Senior Kala Faulkner, the reigning SEC Defender of the Week, anchors a defense that has allowed just 16 shots on goal and 41 total shots. The Tigers begin the SEC portion of their schedule at 6:39 p.m. CT Friday on the road at Missouri. Auburn started the season with two wins on its West Coast trip at UC Irvine and Long Beach State.

Rutgers, which climbed to No. 19 in the latest Top 25, is also off to its best start in program history and boasts a 540:00 scoreless streak — also the longest in school history. Sophomore Casey Murphy, who started 20 games as a freshman, now has 16 career shutouts in just 26 games. Rutgers will take on its first ranked foe of the season when it hosts No. 20 Connecticut (5-0-0) at 1 p.m. Sunday.

Anytime you end North Carolina and Duke’s season-opening shutout streaks while helping your team to a tie and victory on Tobacco Road, you’re bound to get some attention. And that’s exactly what California’s Arielle Ship did as she collected Duke Nike Classic Offensive MVP honors with two goals and two assists on the weekend.

Ship, who garnered conference and national player of the week honors, now leads the Pac-12 with five goals and 12 points on the season. The junior forward has already surpassed her total goals scored (4) from 2014.

Cal, which moved up to No. 16 in the rankings this week, is back at home against UC Riverside Friday and hosts Saint Mary’s Sunday.

The fourth week of play offers plenty of tough Top 25 match-ups, highlighted by a pair of games in the Sunshine State.

• No. 3 Florida State hosts No. 22 UCF at 7 p.m. Thursday in Tallahassee for a follow up to last year’s NCAA quarterfinal contest that the Seminoles won 1-0. It will be FSU’s fourth game against a ranked opponent this season as it looks to stretch its 13-match home winning streak, which dates back to Sept. 8, 2014.

• No. 6 Texas A&M travels to No. 10 Florida to open SEC play at 7 p.m. Thursday with a match-up that features the top two teams in the league in each of the past three years. The Aggies joined the SEC in 2012, but the rivalry is already strong. The two programs have posted identical .829 winning percentages in league action and the series is tied at 5-5-0. With a victory, Texas A&M head coach G Guerrieri can claim his 400th career win.

• No. 8 West Virginia heads to No. 15 Ohio State as the Mountaineers try to hand the Buckeyes their first loss of the season at 7 p.m. Friday. WVU has posted four consecutive shutouts since dropping its only match against Virginia Tech Aug. 23. Sophomore Michaela Abam is coming off a record-setting performance in WVU’s 8-0 win over Villanova last weekend. She tallied a school-record four goals in the game, which earned her Big 12 Offensive Player of the Week honors. The Buckeyes have already upset a Top 10 team this season — outlasting then-No. 8 Florida, 1-0, in overtime on Aug. 23.

• No. 7 Penn State (4-1-0) looks to bounce back from last weekend’s 1-0 loss to West Virginia with a trip to No. 2 Stanford (4-0-0) at 8 p.m. PDT Friday. Senior Mallory Weber leads the Nittany Lions with eight points in five games, while freshmen and sophomores have netted six of eight scores for the Cardinal. After giving up a goal just 31 seconds into its season-opener against Hawaii, Stanford has held foes scoreless for the past 359:29.

• Virginia held on to its No. 1 ranking, but not before Pepperdine walked away with a 2-2 tie against the Cavaliers last weekend. The Waves jumped five spots to No. 14 in the latest poll for their efforts, but the schedule does not get any easier with their three next opponents either ranked or receiving votes in the poll. Pepperdine heads to the Arizona Tournament for match-ups with Pac-12 foes Arizona and Arizona State this weekend and then faces UCLA on the road next week.

• With a 4-1-1 record in the first three weeks, William & Mary earned itself a spot in the national rankings for the first time since 2012. The No. 25 Tribe has outscored foes 15-4 this season led by seniors Samantha Cordrum and Katie Johnston, who have each netted three goals. William & Mary’s most recent feat is a 1-0-1 weekend against two ACC foes — a tie at Wake Forest and a win against NC State. W&M looks to keep the momentum going when it hosts Old Dominion at 7 p.m. Friday.