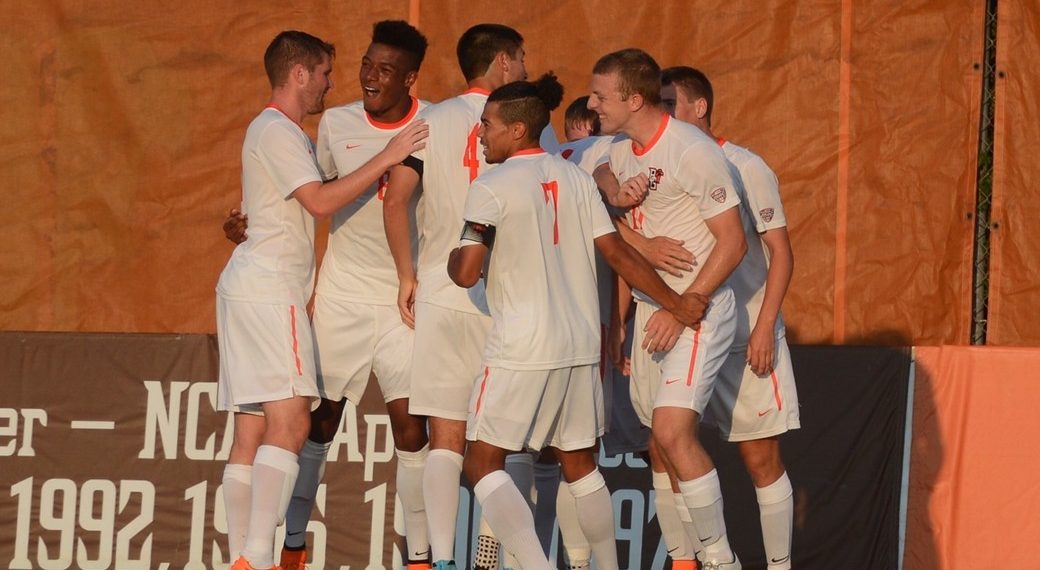 The 2015 season is still young but these teams are off and running with a great start. The yet to be answered question is do they have what it tales to sustain it as the season progresses.

Bowling Green State University – Since coming to Bowling Green in 2009 Eric Nichols has worked to build a winning culture. There were tangible results that his efforts were beginning to pay off last year when the Falcons were 14-6-1 and advanced to the championship game of the MAC Tournament. They look to be building upon that this year with a 4-0-0 record to date that includes wins over SIUE 3-1, Western Illinois 4-1, Drexel 1-0 and Cleveland State 3-0. The Falcons will try to keep their winning streak alive when they venture from the friendly confines of Cochrane Field for the first time this year to travel to Huntington, West Virginia to participate in the Marshall Invitational where they will face Evansville on Friday and Robert Morris on Sunday.  The Falcons have been productive so far on both sides of the ball outscoring their opponents 11 to 2. Junior forward Pat Flynn (6g, 2a) and junior midfielder Joe Sullivan (3g, 3a) have powered the Bowling Green attack while redshirt freshman midfielder Bismark Agyeman has contributed four assists.  Redshirt junior Ryan Heuton and senior center back Jake Genrich are among those that have anchored a very solid Falcon defensive effort to date.  This team has a ton of potential but the going is not going to be easy with tough non-conference games on their upcoming dance card with the likes of Michigan State, Ohio State, and Syracuse as well as the normal slate of MAC opponents.

Hofstra – The Pride out of the Colonial Athletic Association is 4-0-0 and off to their best start in thirteen years. The 2002 season was the last time that Hofstra began the season with four consecutive wins. The Pride began the season with a signature win over nationally ranked Syracuse 2-1, then topped Vermont 4-0, Army 1-0 and St. John's 2-0. Hofstra has earned a spot in the College Soccer News Top 30 National Poll for the past two weeks. They will place their undefeated record on the line this weekend in a "something has to give" contest in an early season showdown with an also undefeated American team on Friday. The Pride will also tangle with a competitive George Mason squad in Fairfax, Virginia on Sunday. Wins in these two games would be huge for Hofstra and signal that they are for real. Junior midfielder Joesph Holland (4g, 2a) leads the Hofstra attack. Senior goalkeeper Patric Pray along with Jon Fraser, Rory Murphy, Daniel Grundel, Marius Flateboe, Nino Alfonso and Harri Hawkins are part of a defense that has allowed only one goal to date and has recorded a shutout in their last three contests.

Duke –  The Blue Devils are off to a great start but they have not really been tested yet. They defeated Loyola Greyhounds 5-1 on Tuesday night with five different players contributing a goal to improve to 4-0-0.  Duke also has wins over Saint Mary's 3-2, DePaul 1-0 and Iona 2-1.  The competition level increases significantly as the Blue Devils begin Atlantic Coast Conference play on Friday when they welcome defending national champion Virginia to Koskinen Stadium in Durham.  Sophomore forward Jeremy Ebobisse (4g, 2a) has been the main man in the Duke attack to date. It is noteworthy that eleven of Duke's eighteen points have been produced by members of the sophomore class.  However, senior midfielder Zach Mathers who has been a starter for the past three seasons is the guy who sets the pace for the Blue Devils. Graduate students Tyler Hilliard who transferred in from Syracuse and Jared Rist who transferred in from Georgetown are new additions in the back for a Duke defense that has allowed a total of four goals in four games to date.

American University – The Eagles soared last weekend with a 6-0 thumping of Howard and a solid 4-0 win over Penn. They also have wins over George Washington 2-1 and George Mason 3-1 to stand at 4-0-0. They will put their undefeated streak on the line when they face Hofstra on Friday and Fairleigh Dickinson on Sunday.  The defense that is anchored by senior goalkeeper Dylan Hobert and senior back Jordan Manley has only allowed two goals so far this year. Senior midfielder Liam Robley (2g, 4a), junior center back Michael Cherry (2g, 0a) and junior midfielder Panos Nakhid (2g, 2a) have played keys roles on the offensive side of the ball.

Nebraska Omaha – The Mavericks are off to the best start in program history with a perfect 4-0-0 record that reflects wins over Kansas City 2-1, Pacific 2-1, UC Irvine 1-0 and Cal State Northridge 4-1. They now hit the road for the first time this year to face Marquette in Milwaukee and DePaul in Chicago.  UNO has shown steady improvement under the direction of head coach Jason Mim who joined the program in  2011 in its inaugural season.  With nine starters returning, the Mavericks seek to build on the 2014 season in which they were 10-5-2 overall with a 3-2-1 mark in Summit League play. Mark Moulton (3g, 1a),  Andres Irvin (1g, 3a),  Logan Mendez (2g, 0a) and Fazlo Alihodzic (1g, 2a) are among those who have played a key role on the offensive side of the ball to date.

Loyola Marymount University – The Lions are off to their best start in program history with a 4-0-0 record.  LMU has not allowed a goal to date posting a 1-0 win over San Jose State. a 2-0 win over UNLV, a 1-0 win over Harvard, and a 1-0 win over Boston College. Their upcoming dance card includes a game on the road on Friday with CSU Bakersfield and what shapes up to be a tough contest at home on Sunday against a surging New Mexico team. Sophomore forward Grant Sampson has netted three of the five goals that LMU has scored to date. Sophomore forward Alvaro Madrigal and junior midfielder Adrien Perez have each contributed a single goal.  Senior goalkeeper Paul Blanchette who has fifteen career shutouts under his belt has anchored a rock solid LMU defense along with backs redshirt junior Mark Dutseth, junior transfer Jose Ochoa from Cerritos College, and freshman Cole Souza.

Elon – Chris Little enters his second season as the head coach at Elon and has the Phoenix off to a 4-0-0 start for the first time since the 2006 season. Elon has wins over DePaul 4-0, Saint Mary's 1-0, Campbell 2-0, and North Florida 5-2. This is a team that should win a lot of games before the season is over. However the Phoenix have their work cut out for them when they host a very good Davidson squad on Saturday that is 2-0-1 and travel to face nationally ranked Wake Forest next Tuesday in Winston-Salem. Elon will have to be on the top of their game to prevail in both of those contests but accomplishing that is certainly something that a very competitive and experienced Elon team is capable of doing. Senior forwards Caue Da Silva (3g,1a) and Cooper Vandermaas-Peeler (2g, 2a) and senior midfielders James Brace (2g, 2a) and Miguel Salazar are all very capable finishers. Seniors Sam McBride and Nathan Diehl anchor a solid backline.