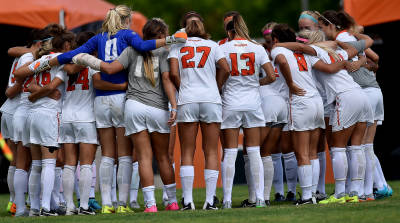 TURNING IT AROUND: After a winless season in 2014, Oregon State is off to a 4-0-2 start — the program’s best start since opening with a 5-0-1 record in 2010. But that unbeaten mark will be on the line when the Beavers visit No. 8 BYU Thursday night.

The Beavers scored just four goals in 20 matches last year, but this season OSU has collected six goals in six games. Oregon State has held its opponents to just three goals in the first six matches of the year, including a trio of shutouts.

The Beavers have not allowed a goal in their last three matches, and have shutout their opponents for 334 consecutive minutes, dating back to the 78th minute of their August 30 match against San Francisco. Oregon State has played in five overtime games in the past six matches.

The BYU Cougars (6-1-0) will play their sixth Pac-12 opponent of the year when they host the Beavers. Oregon State is led by sophomore goalkeeper Bella Geist who led the Pac-12 in saves last year and has already matched her shutouts from 2014 with three.

SATURDAY NIGHT LIGHTS:  Two matches between undefeated highly ranked opponents highlight the opening weekend Atlantic Coast Conference play when Virginia Tech takes on North Carolina, and Clemson faces Notre Dame Saturday night. With six teams in the Top 11 nationally ranked teams, the ACC is arguably the toughest conference in the country. So who will come out unscathed this weekend? Statistically, North Carolina and Notre Dame have the edge.

The Tar Heels take their scoring show on the road against Virginia Tech Saturday.North Carolina ranks sixth in the nation with 3.25 goals per game, while holding opponents to a 0.365 goals against average, which is 12th among Division I teams. The Tar Heels are led by sophomore forward Jessie Scarpa who tops the Tar Heels with 14 points on five goals and four assists.

Notre Dame also goes on the road to face Clemson as the Irish look to extend their three-game scoreless streak. UND has allowed just 1.9 shots per game in their first eight matches and boasts a 0.38 goals against average. The Irish defense, anchored by reigning ACC Defensive Player of the Week Katie Naughton, will pose a difficult challenge for the Tigers, who are averaging more than 17 shots per game.

STARTING STREAK: Washington State looks to crack into the NSCAA Top 25 next week with a successful result as the Cougars finish out their non-conference schedule with matches against West Coast Conference foes Portland and Gonzaga. The Cougars are riding a six-game winning streak into the weekend and are one of only three teams in the country without a tie or loss this season (Rutgers and Tulsa are the others). The stellar start is a group effort at Washington State — nine different players have scored the team’s 13 goals.

DEMON BALL: DePaul slid into the No. 21 spot on the merits of a pair of shutout victories last weekend as the Blue Demons improved to 6-1-1 on the year. The Blue Demons ranked eighth nationally in shutout percentage with six clean sheets in their first eight games. DePaul has outscored their opponents 21-4 and rank 22nd in the nation with 2.67 goals per game. On Thursday night, the Blue Demons host Long Beach State, a squad receiving votes in the NSCAA Top 25 poll, as they try to continue their upward momentum. Long Beach State will look to stop the Blue Demons’ climb with a defense that ranks ninth nationally in goals against average (0.345) and has allowed just three goals in eight games this season.

LSU sophomore forward Jorian Baucom has netted a goal in six consecutive games and boasts an SEC-leading eight total goals on the year. Baucom has already matched total output from last season and ranks second in the NCAA in total goals.

No. 15 Rutgers has yet to allow a goal in seven games this season behind the outstanding play of sophomore goalkeeper Casey Murphy, who already has 17 career shutouts. The Scarlet Knights are off to their best start in program history at 7-0-0.

Texas A&M is the lone SEC squad with more than two players who have scored three or more goals this season. Sophomore Haley Pounds leads the charge for the Aggies with six tallies.