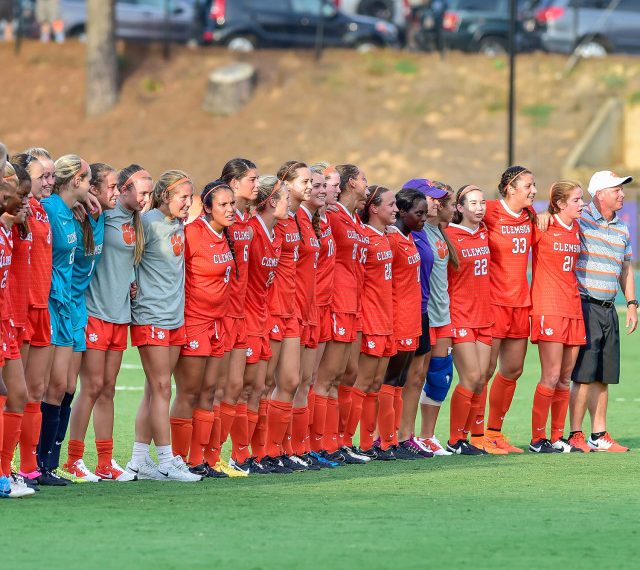 BEST OF THE BEST

There are some incredible matchups on the schedule in Division I women’s soccer this weekend, but Sunday’s meeting between No. 1 North Carolina and No. 2 Florida State at noon in Tallahassee is certainly the game everyone put a star next to before the season even started.

With more than its share of NCAA and ACC championships over the years, North Carolina has been the team to beat for longer than most fans can remember. Florida State has worked hard to be mentioned in breath as the Tar Heels and, now, after winning the 2014 national title and having UNC’s number for the past few years, the Seminoles have become a perennial national contender and are looking to keep it that way.

While the Tar Heels hold a 24-6-3 advantage in the all-time series with FSU, the Seminoles are unbeaten (4-0-1) in the past five matches between the two squads. Florida State’s six wins over North Carolina are tied with Notre Dame for the most of any school in the history of UNC soccer. Last year’s meeting in Chapel Hill ended in a 1-1 draw.

The matchup will feature two of the top scoring offenses in the nation — FSU ranks third with 2.92 goals per game and UNC is tied for fourth at 2.83. The defenses aren’t two shabby either. Both squads boast GAAs that rank in the top 15 nationally.

Fortunately, if you can’t get to Tallahassee for this one, you can tune in on the ACC’s Regional Sports Network, ESPN3 or WatchESPN.

Elsewhere in the ACC, No. 7 Clemson (8-1-1, 3-1-0) will host a pair of top 10 matchups this weekend when No. 3 Virginia (8-1-1) visits Thursday and No. 9 Virginia Tech (10-1-1) tangles with the Tigers Sunday. The Cavaliers (3.30 goals per game) and Hokies (2.38 goals per game) are two of the best offenses in the nation, but the Tigers have posted three shutouts in the past five games. In fact, Clemson has allowed more than one goal just one this season — a 3-1 loss against FSU Sept. 24. The Tigers will have to keep up the stout defense if they want to remain in the top 10 and in the hunt for the ACC title. Thursday’s tilt will be broadcast live on ESPN3.

No. 8 Auburn faces two top 20 squads this weekend, beginning with a road game at No. 10 South Carolina Thursday. Auburn has won four consecutive SEC matches —including a victory over then-No. 9 Florida — and boasts a 4-1-0 record in league play. Going on the road to South Carolina won’t be easy. The Gamecocks are one of the top programs in the nation in attendance so home field advantage will be in full swing. Plus, South Carolina ranks 8th nationally with 2.75 goals per game and fields a potent attack —15 different players have scored goal this season. The game will be televised on the SEC Network. If the Tigers get past the Gamecocks and secure first place in the league standings, they won’t celebrate for long. The Tigers host No. 19 Texas A&M Sunday.

Keep an eye on the Washington Huskies, who made the jump to No. 19 in the latest NSCAA rankings after posting victories over both UCLA and USC last weekend. The last time the Huskies achieved that feat was in 2000 when they won the Pac-10 title. With a 2-1-0 league record Washington is in a five-way tie for second place in the Pac-12 standings behind first-place Stanford. The Huskies hit the road to Colorado Friday and Utah Sunday.

Speaking of the Pac-12, Stanford has jumped out to a 3-0-0 record in league play since closing out its non-conference slate with a 1-0 loss at Santa Clara. A key reason for the Stanford’s strong start is the squad’s youthful look. Underclassmen have accounted for 14 of the Cardinal’s 20 goals this season. Sophomore midfielder Andi Sullivan, last year’s Pac-12 Freshman of the Year, tops the team with 10 points on four goals and two assists. She tallied the game-winner against Arizona State last week, and scored in an overtime defeat of Arizona. Stanford, which will host six of its final eight games, welcome Oregon State and Oregon this weekend as the Cardinal looks to stay perfect in league action.

St. John’s, the first team receiving votes in the most recent NSCAA poll, is off to its best start in program history at 11-1-0. The Red Storm enters the weekend on a seven-game winning streak, including a 3-0-0 start in BIG EAST play. St. John’s heads to Georgetown at 3 p.m. Thursday for a matchup of unbeaten league teams. Senior forward Rachel Daly fuels the Red Storm offensively with 11 goals in 12 games. She ranks fifth in the nation with 0.92 goals per game. With two goals against Marquette last weekend she became the program’s all-time leader in goals and points. St. John’s is also clicking on defense. The squad has posted nine shutouts so far, and ranks fifth nationally with a 0.33 goals against average.