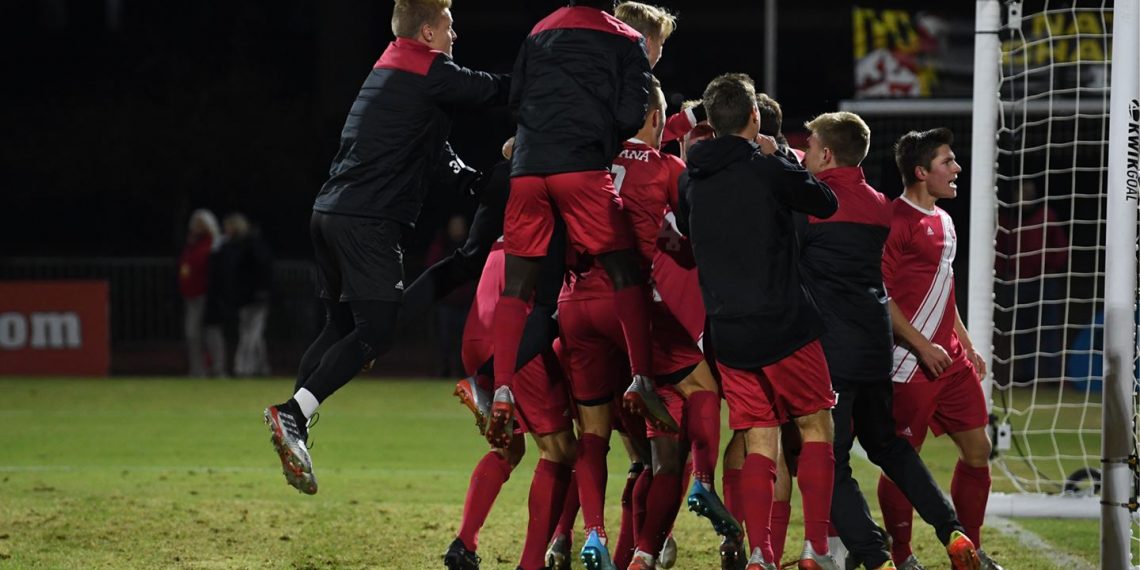 Finalists for many conference tournaments were determined on Friday night. Some contests went as anticipated but as is always the case their were several upsets. The action continues on Saturday and Sunday with automatic berths and seeding in the NCAA Tournament on the line.

Washington 3 – Oregon State 1 – The Huskies secure the Pac-12 title with an 8-2-0 mark in conference play.  Junior midfielder Blake Bodily broke the ice in the tenth minute of play when he finished a cross from Lucas Meek to give Washington a 1-0 lead.  The contest remained 1-0 at halftime.  Oregon State got on the board in the second half when back Loke Strenov controlled a loose ball in the box and sent it into the back of the frame to knot the score at 1-1. Senior midfielder Joey Parish answered for Washington scoring twice in the seventy-eighth minute to make it 3-1 Washington. Sam Fowler had one save in goal for the Huskies. Adrian Fernandez had three stops in goal for the Beavers.

Indiana 1 – Maryland 0 (ot) – Indiana advances to the Big Ten title match behind  a solid team effort on the defensive side of the ball and a successful penalty kick in the 103rd minute of play by sophomore back Jack Maher.  Indiana had a twenty-two to six advantage in shots for the evening.  Freshman goalkeeper Roman Celetano had two saves in goal for the Hoosiers while Niklas Neumann had an eight save evening in goal for Maryland.  Indiana improves to 14-2-3 overall and advances to face Michigan in the championship contest.  The Terps drop to 10-7-2 and await an at-large berth into the NCAA Tournament.

Missouri State 1 – Drake 0 – Josh Dolling's goal out of a free kick in the sixty-seventh minute of play  with an assist from Jack Denton and solid team defense gave Missouri State the edge they need to secure the win in this Missouri Valley Conference semifinal match. The goal was Dolling's fifth game-winner of the season to date.  Missouri State has allowed a total of only ten goals so far this year. Michael Creek had three saves in goal for Missouri State and Luke Anderson had two saves between the pipes for Drake.  The Bears continue to roll as they improve to 17-0-0 and advance to face Loyola Chicago on Sunday in the championship match.

Bowling Green – 1 – Akron 0 – Junior midfielder Chris Sullivan sent a shot into the upper corner of the goal from the corner of the box in the seventeenth minute that proved to be the difference in this Mid-American Conference semifinal contest.  The goal was Sullivan's seventh of the year. The Falcons return to the title game for the first time since 2014. Anthony Mwembia had four saves in goal to anchor a solid Bowling Green defense.  Tor Saunders had one save in goal for Akron.  Bowling Green will face West Virginia in the championship match on Sunday.  The Falcons defeated West Virginia 3-0 when they faced each other back on October 26.

West Virginia 3 – Western Michigan 2 – Josh Dimatteo scored twice and defender Albert Andres-Lipp converted a penalty kick that resulted from a foul in the box on forward Tony Pineda to enable the number six seeded Mountaineers to upset number two seed Western Michigan to advance to the championship match of the Mid-American Conference.  Paul Liagre and Daniel Nimick scored for Western Michigan.  The Mountaineers will face Bowling Green on Sunday in the championship match.  West Virginia head coach Marion LeBlanc stated, "We're really looking forward to getting to play on Sunday. It's a one game opportunity to get into the NCAA Tournament."

Loyola Chicago 2 – Bradley 1 – These two teams tied 0-0 twice when they faced each other during regular season play.  Loyola Chicago was the aggressor in this one but Bradley got on the board in the fifteenth minute of play when a pass by Bradley defender Jack Lang deflected into the back of the frame off a Loyola Chicago defender.  Loyola Chicago knotted the score at 1-1 and got new life when midfielder Aidan Megally converted a penalty kick to net his tenth goal of the season. Midfielder Justin Sukow netted the game-winner for Loyola Chicago when he place a shot inside the left post after receiving a pass from Alex Moskal to make it 2-1. The goal was Sukow's ninth of the season.  Loyola Chicago improves to 11-4-3 and advances to face Missouri State in the championship contest on Sunday.

Michigan 1 – Penn State 0 – These two teams played to a scoreless tie when they faced each other back on September 27.  As expected, this one was close but a picture perfect goal from Michigan senior forward Jack Hallahan out of a free-kick in the sixty-second minute and lock down play on the defensive side of the ball gave the Wolverines the edge they needed to secure the win.  Freshman Owen Finnerty, playing in place of injured netminder Andrew Verdi, had two saves in goal while the Wolverine backline limited Penn State to only six shots.  Kris Shakes had four saves in goal for Penn State.  Michigan improves to 11-4-4 and advances to face Indiana in the Big Ten final on Sunday.  Penn State is now 12-3-3 and will await an at-large berth in the NCAA Tournament.

UC Davis 2 – UC Santa Barbara 0 – This one was played before a crowd of 1,308 fans at Aggie Soccer Field in Davis, California. UC Davis continues to impress. This one looked like it might be scoreless until a goal from Andy Velasquez with an assist from Robert Mejia in the fifty-fifth minute gave UC Davis a 1-0 advantage.  Kristina Heptner made it 2-0 when he scored in the closing minute of regulation with Mickelson providing the helper to put this one on ice. UC Davis secures the Big West Tournament title and the automatic berth in the NCAA Tournament that goes with it. Willis Lapsley had a single save in goal for the Aggies to secure his ninth shutout of the year.  Ben Roach had five saves in goal for the Gauchos who drop to 12-4-4 and await the receipt of an at-large berth into the NCAA Tournament.

Marshall 1 – Kentucky 0 – Neither team could break through until Vinicius Fernandes found the back of the frame from close range in the seventy-seventh minute that was set up by a cross from Jamil Roberts. The goal was Fernandes' second of the year and the helper was Roberts' tenth of the season to date.  Kentucky had an eleven shot evening but only one was on frame. Paulo Pita recorded the shutout in goal for Marshall. Enrique Facusse had three stops in goal for Kentucky. Marshall  improves to 14-2-3 and advances to face Charlotte in the CUSA Championship match. Kentucky is now 13-4-3 and awaits an at-large invite to the NCAA Tournament.

Charlotte 1 – FIU 0 – Senior midfielder Teddy Chaouche comes up big for the 49ers once again when he drove a header into the back of the goal after receiving a cross from junior midfielder Joe Brito in the fourteenth minute of the game. A stout Charlotte defense led in goal by Elliot Panicco recorded their eighth shutout of the season.  The 49ers advance to the CUSA title match for the third year in a row where they will face a Marshall team that they tied 0-0 in regular season play.

Seattle 1 – UC Bakersfield 0 – This defensive oriented contest was decided by an own goal in the sixty-fifth minute.  Akili Kasim had four saves in goal for Seattle while Detre Bell had six saves in goal for UC Bakersfield.  Seattle had a sixteen to thirteen advantage in shots for the day. Seattle head coach Pete Fewing pretty much summed things up when he stated, "We gutted it out today. It wasn't the prettiest game, but we got it done"  Seattle advances to the WAC Tournament title match to face a Utah Valley team that they topped 2-1 in overtime when the two teams met during regular season play.  Utah Valley advanced past Air Force in a contest that was decided by a penalty kick shootout after it was scoreless at the end of regulation and extra time.

Rhode Island 0 – Fordham 0 (ot) – This one was scoreless at the conclusion of 110 minutes of play. Rhode Island advanced after prevailing seven to six in a penalty kick shootout. The Rams advance to the Atlantic 10 Championship contest on Sunday where they will square off with Dayton who beat VCU 1-0. Rhode Island and Dayton did not face each other during regular season play. Rhode Island is 13-3-3 and Dayton 13-7-0.

Georgia State 1 – Central Arkansas 0 – Georgia State advances to their fifth consecutive Sun Belt Conference final with back Alex Summerfield's goal from the left side of the box in the seventy-sixth minute the difference along with a solid bend but don't brake performance on the defensive side of the ball from backs Summerfield, Kyle Clinton, George Proctor and goalkeeper Paul Tyson who had five saves.  Marc Olsen had a single save in goal for Central Arkansas. Georgia State advances to the championship match on Sunday where they will face Coastal Carolina.

Fairleigh Dickinson 0 – Saint Francis 0 (ot) – Fairleigh Dickinson advanced in a penalty kick shootout 3-1 after the contest was scoreless at the conclusion of 110 minutes of play. Both teams attacked but defense ruled the day in this unexpected result.  FDU head coach Seth Roland stated, "Anyone who would say a 0-0 soccer game is boring just missed an exciting one. Both teams hit the post two or three times, so it was pretty exciting."  Saint Francis had a twenty-five to fourteen advantage in shots and a seven to four advantage in shots of goal.  Jahmali Waite had seven saves in goal for FDU.  Fairleigh Dickinson advances to the NEC championship game on Sunday to face an LIU team that advanced by defeating Bryant 4-0.