What The Coaches Had To Say 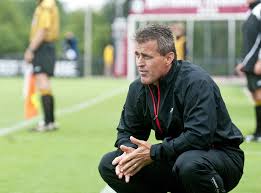 Maryland head coach Sasho Cirovski after Terps 2-1 win over UCLA – “When you have two teams of this caliber go back and forth and compete at the highest level this early in the year, that’s an incredible soccer game. This was a magnificent atmosphere and it will certainly go down as one of the magical moments in Maryland Soccer history.”

Denver's first year head coach Jamie Franks after the Pioneers tied UC Santa Barbara 2-2 – “We played well tonight, but I think we’ll learn some lessons from this game. Everything is based on our shape and our ability to be disciplined in it. When we stick to our identity, we can play with the best teams in the country. Their first goal came from a lack of organization on the back stick. When you play against good opponents, you must always be focused around the box.”

Georgetown head coach Brian Wiese after the Hoyas were upset by Akron 1-0 to begin the season 0-2-1. “The schedule we put together is merciless and if you don’t get it just right, you lose. Today is a good example, we didn’t get it just right and Akron was good enough to make you pay for it with a terrific goal on their end.  Goals will come, but we need to get our rhythm back as a team on what we’re doing when we have the ball. The defending side of it is actually not that bad, but from our point of view we want to be a little less predictable when we have it and capitalize on some of these chances we do get.”

UCLA head coach Jorge Salcedo after the Bruins 2-1 loss to Maryland in College Park. – "Tonight was a very good soccer game. We saw two teams that played to win the game. The ebb and flow went back and forth for ninty minutes and through overtime. We can hold our head's high knowing we competed throughout the match. For the second week of the season, it was a very high level game. We have to learn from this game and continue to get better."

Clemson head coach Mike Noonan after the Tigers topped in-state rival South Carolina 3-0. “It was an entertaining performance and I am very proud of the team. All credit to the players and the way they prepared and the experience of the team.”

Akron head coach Jared Embick after the Zips topped Georgetown 1-0. – "A good win over a very talented Georgetown team. I thought we played very well and created some very good chances. At the end we had to manage the game a bit, but we did what we came to do."

Stanford head coach Jeremy Gunn after the Cardinal topped Northeastern 1-0. – “I thought we passed and moved the ball incredibly tonight.”  It was mesmerizing at times. The players really enjoyed zipping the ball around and as a result we created great chances. It was a great team performance and a great 1-0 result.”

Rutgers head coach Dan Donigan after his team defeated Colgate. – "It's great to get a win on the road, especially against a very good Colgate team. There are still some things we need to fix. We gave up too many loose balls, which resulted in Colgate's first goal. However, we did enough to get the win on what is a challenging weekend."

Irish head coach Bobby Clark after Notre Dame beat South Florida 2-0. – "I thought it was a very good performance. They had a few chances at the start, a couple flurries early on, and then we took over the game quite nicely. The second half was very good."

Lipscomb head coach Charles Morrow after his team rebounded from two opening losses to upset highly regarded Xavier 2-1. – “The story of the night was not the game that was played tonight. It was the response of what was an awful start to the season last weekend. This week during training we questioned the guys’ character and their mentality, but their performance tonight speaks for itself in terms of their response to us."

Indiana head coach Todd Yeagley after the Hoosiers defeated UAB 2-1 in the first game of the Mike Berticellin Memorial Tournament. – "It's a big win. We had an early mistake on our end, but I thought the guys bounced back well. We showed great resilience quickly to get a goal back."

William and Mary mentor Chris Norris after the Tribe played with only ten men for the final forty minutes of their 1-1 draw with North Carolina. – "We are pleased with the performance and, under the circumstances, not disappointed with a tie. Once again, we looked dangerous and our defensive organization was much improved. Most importantly, we showed great unity and character after going a man down."

New Mexico head coach Jeremy Fishbein after the Lobos tied San Diego 2-2 in their 2015 home opener. – We're disappointed with the draw, but you have to take a lot of positives away from it. The guys showed a lot of courage and a lot of fight. We're a young team still, and I was proud of that."

Michigan State head coach Damon Rensing after the Spartans defeated Niagara 4-0 and senior goalkeeper Zach Bennett secured his 37th victory to become the Michigan State career-leader in wins. – "We are pretty team-oriented program, and I think when you have good goal tending like Zach you have good results. I think that Zach would be the first to admit that you can't have those types of wins without good players around you. Zach deserves to be looked at in that group of all-time goalkeepers. Reid Friedrichs, John Spink, Paul Zimmerman and a guy by the name of Joe Baum. So, we have always had a good history of goal tending, and Zach is up there with those guys."

North Carolina State head coach Kelly Findley after the Wolfpack topped Liberty 2-0 to improve to 3-0-0. – "We're having quality possessions that don't allow our opponents many opportunities. We're keeping the ball, seeing a lot of transition all over the field, and we've got good senior leadership."

Seattle head coach Pete Fewing after his team beat Northwestern 3-0. – “It was tough to break them down in the first half, but I was very pleased we got a lot of good shots and three goals in the second half. It was a terrific goal by Hamza and two terrific goals by Michael Roberts. We had great contributions from guys coming off the bench and I was really impressed and happy for our guys, because they worked really hard. Defensively, it’s our second shutout of the season; we had nine last year and we want more than that this year.”

Stetson head coach Ernie Yarborough after his team tied Detroit 1-1 after 110 minutes of play to up their record to 2-0-1. – “We certainly felt we had our chances to get the second goal in the second half or overtime and come out with a win but we didn’t. At the end of the day you need to get a positive result. Our game is predicated on getting to the end. That’s all you can ask for is get to the end and hope for a result.”

Virginia head coach George Gelnovatch after the Cavaliers tied Tulsa 1-1 in their second game of the 2015 campaign. – "It's a four-month process. We flashed back to this time last year and sometimes you take your lumps, whether it's a tie or a loss, although you never want to do that because we're all so competitive. At the end of the day, we are learning and evolving and we will be better down the stretch because of this game against a quality team like Tulsa."

SMU head coach Kevin Hudson after the Mustangs were defeated 4-2 by Boston College on the road to pick up thier first loss of the year. – "We played well tonight, We were very dangerous in the final third creating lots of chances but gave up some tough goals. This can be a cruel game because we deserved a better result tonight."

FGCU head coach Bob Butehorn after the Eagles lost to Wake Forest 1-0 in Winston-Salem. – "It wasn't our best game in the final third, but we were good moving the ball and creating a lot of opportunities. We're battling some injuries right now. But Wake played a very good and attacking style. However, moving forward it was a great experience for us. It's a very tough place to play against a good ACC team and will only benefit us."