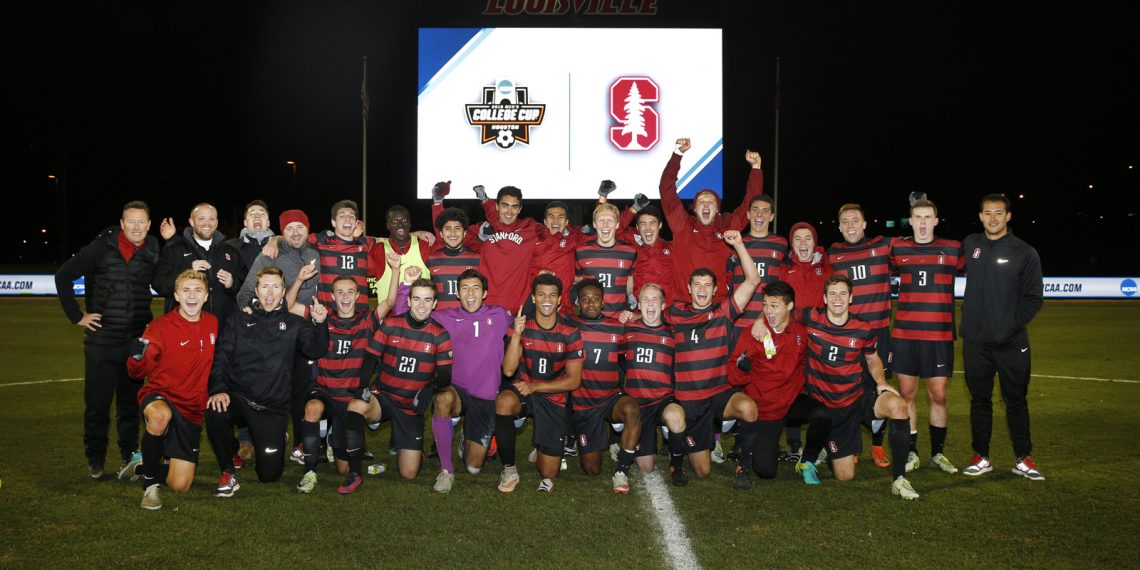 Wake Forest tops fellow ACC member Virginia Tech 2-0 and Stanford took to the road and came away with an impressive 2-0 win over Louisville to claim the two final spots in the College Cup and set up what looks to be a really intriguing College Cup (Final Four) .

#2 seed Wake Forest  2 – Virginia Tech 0 – Wake Forest defeats fellow Atlantic Coast Conference member Virginia Tech to return to the College Cup for the fifth time in the history of the program and the first time since the 2009 season.

Last year the Demon Deacons' season came to an earlier than desired end in the Elite Eight when they were upended at home by eventual National Champion Stanford 2-1 in overtime to conclude their season with a 17-3-2 overall record.  This year a very experienced and determined Wake Forest team was not about to suffer the same fate.

However the outcome of the contest with an equally determined Virginia Tech team was in doubt until the eightieth minute of the game when senior midfielder and playmaker Ian Harkes sent a pass into the box to freshman midfielder Ema Twumasi who controlled it and skillfully created the separation he needed to drive a low shot into the back of the net to break the ice and give Wake Forest a 1-0 advantage. Twumasi then in effect put the contest on ice for the Demon Deacons a little over two minutes later when he alertly sent the rebound of his own shot back into the net to make it 2-0 Wake Forest before a crowd of 3,410 fans that were on hand at Spry Stadium in Winston Salem.

Freshman goalkeeper Andreu Cases Mundet, who assumed the starting role between the pipes several  contests ago when redshirt senior Alec Ferrell sustained an injury, had a one save evening to notch his fourth shutout to date and the thirteenth for the program this year. Mundet was supported by a tenacious Wake Forest backline consisting of junior Kevin Politz who is in his third year as a starter, sophomore Logan Gdula, freshman Alex Knox and sophomore Sam Raben who is in his second year as a starter.  The Wake Forest defense has allowed a total of only eleven goals this year.

The ACC Champion Demon Deacons improve to 18-2-3 overall and are now unbeaten in their last twelve contests.  You have to go back to the end of September to find a contest in which Wake Forest came out on the short end of the score.

Virginia Tech under the direction head coach Mike Brizendine finishes an impressive breakthrough type year with a 13-5-4 overall record.  The success and progress that the Hokies experienced this year would not have likely been foreseen by even the most diehard Virginia Tech supporter.  Virginia Tech capped off a banner season with wins over East Tennessee State, number ten seed Charlotte, and number seven seed Indiana to advance to the Elite Eight. Look for the 2015 campaign to be a springboard for continued success on the pitch in the future for the Hokies.

Wake Forest under the guidance of second year head coach Bobby Muuss continues to display a very productive multi-dimensional attack and very solid play on the defensive side to the ball.  The Elite Eight win over Virginia Tech sets up an interesting match between Wake Forrest and an equally hot University of Denver team that also has a dangerous multi-dimensional attack and a defense that has allowed only eleven goals this year.

Muuss had a successful eight season tenure as the head coach at Denver before leaving to accept the head coaching job at Wake Forest.  Denver's second year head coach Jamie Franks was an assistant coach at Denver under Muuss and is no stranger to the program at Wake Forest having had a very productive tenure there as a player and as a member of the 2007 Demon Deacon squad that won the National Championship.

While the linkages with Muuss and Franks may make for an interesting story line they will not have any impact on the outcome of the contest between the Deacons and the Pioneers. What is important is that this will be the first time that either Muuss or Franks will have been the head coach of a team in the College Cup.

The Wake Forest and Denver contest is scheduled to get underway in Houston on Friday at 6 p.m. EST and will be shown on ESPNU.  This contest between two very hot teams falls into the category of a "something has to give" match.

#5 seed Stanford 2 – #4 seed Louisville 0 – The Stanford Cardinal out of the Pac-12 representing the hopes of the west coast took their act on the road traveling to Louisville where they secured an impressive road win over the Louisville Cardinals out of the ACC.  The victory enables Stanford to continue their quest for back-to-back National Championships.  Winning one National Championship is a real accomplishment but winning consecutive national titles rarely occurs.

The Cardinal who entered the season without five key and experienced starters had huge gaps to plug on both sides of the ball but they have continued to gel and improve as the season progressed.  Stanford head coach Jeremy Gunn summed it up perfectly and accurately when he stated, "We graduated out incredible players and people that had been heartbeat of the team. What you hope as a staff is to create a culture that celebrates graduating on great players and then cultivates the next great player to come along.  That's what we've managed to do this year."

Junior forward Foster Langsdorf, who has continually displayed the ability to come up with big goals in clutch situations, converted a header out of a corner kick served in by freshman midfielder Derek Waldeck in the sixty-fourth minute that gave Stanford the important first goal of the contest and a 1-0 advantage.  The goal was number fifteen on the season for Langsdorf and his eighth game-winner to date.

Redshirt sophomore midfielder Sam Werner contributed the insurance goal for the Cardinal when he sent a picture perfect bending ball out of a free kick into the back of the frame from twenty-eight yards out in the seventy-ninth minute of the match.

Redshirt junior Andrew Epstein who is in his third season year as a starter had a four save evening in goal to anchor the Stanford defense behind a stout backline that features junior Tomas Hilliard-Arce who is a three-year starter, senior Brian Nana-Sinkam a three-year starter,  redshirt Tanner Beason and redshirt sophomore Adam Mosharrafa.

Louisville concludes a very productive 2016 season with a 14-6-2 overall record.  The Cardinals advanced to the Elite Eight with wins over UCLA and Notre Dame.

Stanford continues on the road to the National Championship with a showdown on their dance card next Friday with another ACC team, number ten seed North Carolina (14-3-3). This matchup features two teams who like to attack but also have been very solid on the defensive side of the ball.  The Tar Heels have only allowed a total of ten goals to date while Stanford has only allowed opponents to find the back of the net a total of fourteen times and has recorded five consecutive shutouts.

Both teams had to go on the road and win a tough contest to advance to the College Cup.  North Carolina traveled to Syracuse in the Sweet Sixteen and came away with a hard fought 1-0 win while Stanford had an equally daunting task when they traveled to Louisville in the Elite Eight.

Stanford has the advantage of having the experience of being in the College Cup environment last year.  North Carolina has not been on that stage since the 2011 campaign. However Tar Heel mentor Carlos Somoano like Stanford's Gunn has been there before.  Somoano has stated, "We're going to Houston with high ambitions. We're not going there to celebrate, we're going there to achieve."

This contest, which is slated for Friday night at 8:45 p.m. EST, will be carried live on ESPNU.  It has the makings of a contest that could come down to the wire.