Denver and North Carolina Advance To The College Cup 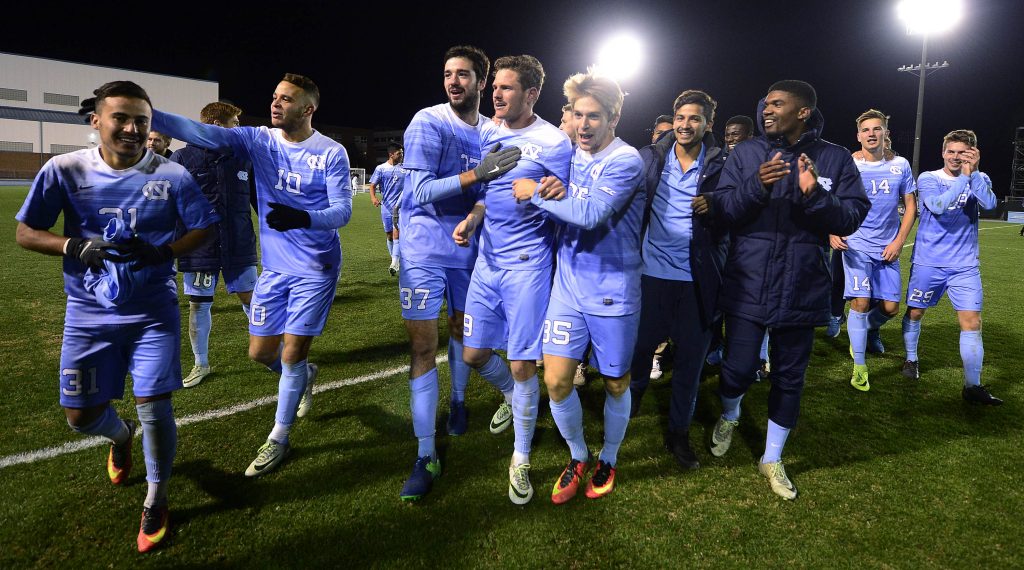 The two Elite Eight games played on Friday night were nail biters with one goal determining who advanced to the College Cup. Denver and North Carolina punch their ticket to Houston. The remaining two tickets will be decided today.

#6 seed Denver 1 – #3 seed Clemson 0 – Denver traveled to the east coast and came away with the biggest win to date in program history when they topped Clemson at Historic Riggs Field.

This one could easily have gone either way but Denver got the edge they needed to prevail when junior centerback Kortne Ford, who has been dangerous all year out of set pieces, drove a header from six yards out into the back of the net out of a free kick in the eighty-ninth minute of the contest. The goal was set up by a beautiful service into the box from midfielder Alex Underwood that Ford ran onto and decisively placed into the back of the frame to shock the partisan Clemson crowd and send the Pioneers into the College Cup for the first time in the history of the program.

Both teams were solid on the defensive side of the ball all evening showing a ton of grit and determination.  Redshirt sophomore Nick Gardner had two saves in goal for Denver. The Pioneer backline of redshirt senior Reagan Dunk,redshirt sophomore Scott Devoss, junior AJ Fuller,and Ford were once again rock solid as Denver effectively contained a very productive Clemson offense to record its fourteenth shutout of the 2016 campaign.

Clemson had eleven shots for the evening while Denver had eight, five of which were in the second half. Both teams had two shots on goal and both had two corner kicks.

Clemson sophomore netminder Ximo Miralles had a one save evening between the pipes for the Tigers behind a solid backline of sophomore Patrick Bunk-Andersen, senior Inman Mafi, and freshman Malick Mbaye.

It was a heartbreaking loss for a Clemson team that concludes another very successful season with a 14-4-5 overall record.  Tiger head coach Mike Noonan stated, "First of all, congratulations to Denver.  It was a hard fought game and both teams played well."  He added, "Before the game, there were three things I told the team that would not change despite the result: I believe in them, I trust them and I love them. That has not changed. We're disappointed as a team, and for the fans, but, we'll be back."

Denver improves to 20-0-3 and will next face the winner of the Virginia Tech at Wake Forest contest in the College Cup.  The Hokies (13-4-4) and the #2 seed Deacons (17-2-3) will square off on Saturday at Spry Stadium in Winston Salem at five p.m.

#9 seed North Carolina 1 – Providence 0 (ot) – Redshirt junior midfielder Drew Murphy, who transferred to North Carolina this year after playing portions of three seasons at UC Santa Barbara but whose playing time has been limited this year due to only six games as a result of a foot injury, netted the game-winning goal for the Tar Heels in the 102nd minute of play. Murphy made a nice move from the left side of the park after receiving  a pass from freshman midfielder Mauricio Pineda to create the space and angle he needed to send a blast that deflected off Providence netminder Colin Miller and into the back of the net to trigger a UNC celebration before the partisan crowd of 4,009 at Fetzer Field in Chapel Hill.

Redshirt sophomore goalkeeper James Pyle had two saves to help the Tar Heels record their twelfth shutout of the 2016 season. The UNC backline of senior Colton Storm, redshirt senior Walker Hume, and Alex Comsia was rock solid once again in containing a Providence attack spearheaded by senior forward Julian Gressel that has done an excellent job in the NCAA Tournament of finding a way to produce the goals needed to prevail.

Miller was solid in goal for the Friars recording five saves.

North Carolina head coach Carlos Somoano stated, "I'm really proud of these guys for what they were able to do tonight. "We're going to Houston with high ambitions. We're not going there to celebrate, we're going there to achieve."

Providence under the direction of head coach Craig Stewart concludes a banner season in which they won the Big East Regular Season title followed by an impressive and gutsy run in the NCAA Tournament that included wins over Delaware, number one seed Maryland, and fellow Big East member Creighton to advance to the Elite Eight.

UNC improves to 14-3-3 and advances to the College Cup for the seventh time and the second time with Somoano at the helm of the program.

The Tar Heels will next face the winner of the #5 seed Stanford vs. #4 seed Louisville contest.  The Cardinal (13-3-4) out of the Pac-12 and the Cardinals (14-5-2) out of the ACC will tangle on Saturday at 7 p.m. at Lynn Stadium in Louisville in what shapes up to be an exciting college soccer match.