Upcoming Contests That Should Be Interesting And Perhaps Revealing 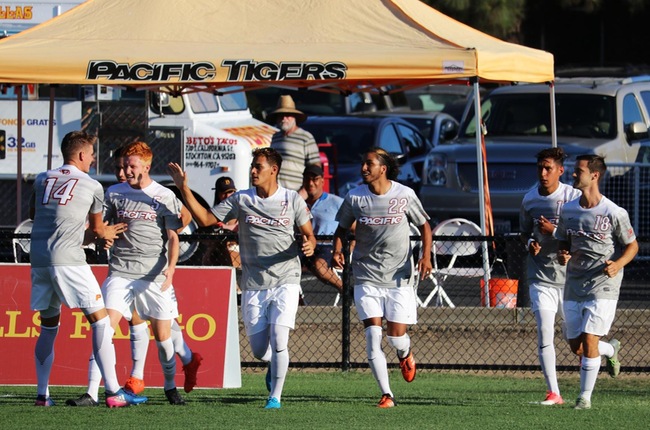 The season is just getting underway nonetheless there are plenty of intriguing and in some cases must win contests on tap this weekend as teams coast to coast seek to build momentum and create a solid foundation upon which to build.

Virginia Tech faces Pacific on Friday and Binghamton on Sunday

Virginia Tech had a mixed opening weekend of play in Omaha.  On one hand the Hokies looked very good in their season opening 2-0 win over Creighton on Friday in which they handed the Bluejays their first season opening loss since 1995. However, the wheels came off the wagon when they took to the pitch to face Omaha on Sunday.  A very porous Hokie defense was exploited by Omaha forward Elvir Ibisevic who scored three goals in the first eleven minutes of play to cruise to a 5-1 win over a Virginia Tech squad that looked to be shell shocked.

The big question mark is which Virginia Tech will show up this weekend when the Hokies seek to get back on track when they host Pacific on Friday and Binghamton on Sunday in the JMU Invitational in Harrisburg, Virginia.  Pacific will arrive in Virginia with a 2-0-0 record after opening the 2017 campaign last weekend with a 2-0 win over Sacramento State and a 5-2 thumping of CSU Bakersfield. Senior forward Tristan Blackmon powers a Pacific attack that could present problems for the Hokies should they have the type of lapses in play that they displayed in the contest with Omaha.

Binghamton also arrives in town sporting a 2-0-0 record with opening wins over George Washington 4-0 and Colgate 2-0. The Bearcats are off to their best start since 2009 with a young team that has been doing a good job of finishing the scoring opportunities that have come their way.

UCLA travels to the east coast to tangle with Maryland in College Park on Friday and Georgetown in the nation’s capital on Monday.

The Bruins opened the season last on Saturday with a 5-3 win on the road against San Francisco. The five goals were impressive but the fact that the Bruins allowed the Dons to score three times in the second stanza of play raises questions about their effectiveness on the defensive side of the ball as well as their focus.

Things clearly don’t get any easier for the Bruins who will have to contain a Maryland side that topped Santa Clara on the road last Friday 4-2 and Hofstra at home on Monday 2-0. The Terps have a high-octane attack that features forwards Gordon Wild, Sebastian Elney and Eryk Williamson among others.

A Georgetown team that is seeking to get back on track after being AWOL from the NCAA Tourney field last year is off to a solid start that includes a 2-0 win over American and a 3-0 win over Coastal Carolina.

The Chanticleers opened the season with a 2-1 loss to George Mason and a 3-0 loss to Georgetown. Coastal Carolina needs a little momentum so a win over UNCG is crucial for the program to have something upon which they can build.

A win against the Spartans would give the Chanticleers new life but a third loss in a row could begin a downward spiral considering the fact that their dance card after the contest with UNCG includes contests with very competitive Charlotte and Radford teams.

The Pilots were ranked as the number twenty-four team in the country in the College Soccer News Preseason Poll but they were upended 3-2 by UNLV in their season opener. However, they bounced back strong to top Fairfield 6-0 with sophomore forward Benji Michel contributing a hat trick.

Seattle will arrive in Portland with a 1-0 win over Loyola Marymount and a 1-0 win over New Mexico under their belts. The Redhawks were tenacious on the defensive side of the ball in both victories. Both Portland and Seattle are hungry to make their presence known on the national scene. A win in this one will be a nice step forward for the winning side.

Cal State Fullerton traveled cross country to open the season with a 2-0 loss to Clemson and a 1-0 win over Wofford in which forward Samuel Goni netted the game-winning goal in the 117th minute of play out of a corner kick served in by teammate Diego Sanchez.  Give Portland a slight edge in this one but only if they keep their foot on the gas and avoid lapses in play.

The Huskies were shocked by Iona 1-0 in overtime at home in their season opener and then slipped past Quinnipiac 1-0 in overtime with Abdou Mbacke Thiam netting the game-winner.

Connecticut can get back on track with a win over the Irish but to do that they are going to have to pick up the level of their play. Notre Dame opened the season with a 2-0 win over San Diego and a 2-1 win in overtime against Cal Poly. Forwards Jon Gallagher and Jeff Farina give the Irish a very solid one-two punch up top. Connecticut traditionally is solid on the defensive side of the ball.  The question is whether or not the Huskie attack led by Thiam will be able to finish the scoring opportunities that come their way.

SIUE travels to face Lipscomb in Nashville on Saturday and host Memphis on Monday.

The Cougars had a great chance last weekend to make a real splash on the national scene with home games against Michigan State and Syracuse. They played well but came out of the weekend with a 0-2-0 record after losing 1-0 to Michigan State on Friday and Syracuse 2-1 on Sunday.

The contests with Lipscomb and Memphis provide the opportunity for SIUE to get into the win column. Anything else would be a huge setback for a team that has the potential to be very good.

North Carolina travels to Wilmington to square off with in-state foe UNCW on Friday and UNCG in Greensboro on Monday.

The Tar Heels looked really good in season opening victories over Providence 4-2 and Rutgers 6-1. Redshirt sophomore forward Jelani Pieters added another dimension to an already multi-dimensional UNC attack with a three goal and one assist weekend.

UNCW opened with a 2-0 win over Jacksonville and a 3-2 win over North Florida in which the Seahawks allowed North Florida to score two goals in the final four minutes of the contest. UNCG tied UAB 0-0 on the road and then were topped by High Point University 2-1 at home.

The Tar Heels are prohibitive favorites in both contests but they could have their hands full should they look past either opponent and not put together a full ninety minutes of play. A good crowd should be on hand at both venues and you can count on both UNCW and UNCG being fired up in regard to the opportunity to upset the Tar Heels. It should be noted that UNCW topped UNC the last time the two teams squared off in Wilmington.

Providence travels to tangle with Rhode Island on Saturday and hosts Bryant University on Monday.

The Friars took to the road last weekend and came away with a 4-2 loss to North Carolina and a 4-1 loss to Wake Forest. No school in the country had a more challenging season opening slate than Providence.

Rhode Island opened the season with a 3-0 win over Boston University and then were thumped 4-0 by Albany. The Rams looked solid in their victory over BU but they fell apart in the second half in the loss to Albany.  Bryant began the 2017 campaign with a 1-0 loss to UMBC and a 2-0 loss to Delaware.

Providence is the best 0-2-0 team in the country right now but they clearly need to get back into the win column and create a little momentum and excitement of their own.

The Blue Devils opened the season with a 2-0 win over UCF and a 3-0 win over Fordham in which they had an 18-4 advantage in shots.  The two shutouts matched the total number of shutouts Duke recorded in 2016.  Senior back Markus Fjortoft and freshman Will Pulisic anchored a very sound Duke defense.

Wins over High Point and Presbyterian would build momentum for a Duke team that features several young players in key roles and would help prepare them for their ACC opener on September 8 with Virginia Tech followed by an always spirited rivalry match with North Carolina on September 16.

The Zips began the season with tough 1-0 on the road losses to Utah Valley and Denver.  Akron played well but was unable to come up with the big plays they needed on the offensive side of the ball to prevail.

Washington will arrive in  Akron with a 2-0-0 recored after securing a 2-1 win over New Mexico and a 2-0 win over Loyola Marymount. Akron's back is to the wall as they seek to get into the win column, prevent a three loss start, and remain in the national rankings. A win over Akron would be a nice resume builder and huge confidence builder for Washington as well.  This key early season contest should be a dandy.