Ten Teams That Are Off To A Great Start – Can They Sustain It? 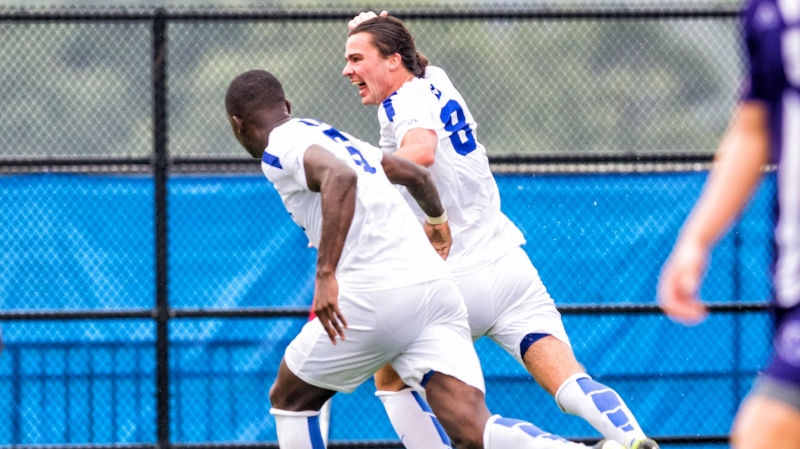 It is early in the season but the following ten teams are among the programs that are off to an impressive start.

Duke – The Blue Devils are 3-0-0 for the first time in the nine seasons to date that John Kerr has been at the helm of the program.  Duke hit the ground running with a 2-0 win over UCF, a 3-0 win over Fordham, and a 3-2 gutsy come from behind win over High Point University in overtime.  The Blue Devils will put their undefeated streak on the line on Tuesday when they host Presbyterian.  Senior Brian White, senior defender Markus Fjortoft and junior midfielder Ciaran McKenna who netted the game-winner in the win over High Point have each scored two goals to date for Duke while freshman goalkeeper Will Pulsic has anchored the defense.

West Virginia – Senior midfielder Jad Arsian has netted four goals to date including two in the Mountaineers 4-1 win on Friday over Wright State to up West Virginia's record to 3-0-0. The Mountaineers opened the season with a 1-0 win on the road at California and a 2-0 win over Santa Clara.  Junior midfielder Jorge Quintanilla has contributed four assists in the three wins.  Junior goalkeeper Stephen Banick has anchored a solid West Virginia defense that has allowed only one goal to date.  Marlon LeBlanc praised the contribution of the younger Mountaineer players after the win over Wright State.  West Virginia looks to be well positioned  to up their win total when they host Monmouth on Monday and UCF the following Saturday.

New Hampshire – The Wildcats have not allowed a goal in their first three contests including their impressive 2-0 win on the road Friday night over a good Boston College team out of the Atlantic Coast Conference.  The win over the Eagles was the first for UNH in twenty-nine years.  Graduate student Andrew Pesci has posted the three shutouts in goal for the Wildcats who opened the season at home with a 1-0 win over Colagate and a 1-0 win Northeastern.  Freshman midfielder Linus Fallberg has scored two of the three goals that UNH has put into the back of the net in their first three contests. New Hampshire will welcome an undefeated  Massachusetts (2-0-1) team out of the Atlantic 10 Conference to Wildcat Stadium on Tuesday and Columbia (0-0-1) out of the Ivy League on Saturday.  Massachusetts and Columbia tied 1-1 when they faced each other Friday.

UNCW – The Seahawks upset nationally ranked North Carolina on Friday 1-0 compliments of a goal from  freshman defender Hjalmar Ekdal to improve to 3-0-0. The goal was Ekdal's second of the early season. UNCW opened the season with a 1-0 win on the road over Jacksonville with redshirt junior forward netting two goals and a 3-2 win over North Florida. Redshirt junior Ryan Cretens had a three save evening between the pipes to record the shutout in the win over North Carolina before a crowd of 1,778 fans at the UNCW Soccer Stadium.  The Seahawks will have the opportunity to knock off another nationally ranked team and secure another resume building win on Monday when they travel to Charlottesville to tangle with a very good Virginia team.

Army – The Black Knights improved to 3-0-0 with a 3-0 win Friday over Fairfield.  The Army attack has been powered by sophomore forward Rex Epps (4g, 1a) who has found the back of the net in each of the Black Knights three wins and sophomore forward Keenan O'Shea (2g, 3a).  Army has been rock solid on the defensive side of the ball having not allowed a goal to date while scouring a total of seven.  Sophomore Justin Stoll  has given the Black Knights a solid presence in goal.  Army opened the season with a 1-0 win over visiting San Diego State and then topped Stony Brook 3-0 on the road.  The Black Knights have a two tough upcoming contests on their dance card that will test the mettle and skill of Russell Payne's team.  On Monday they host a Fairleigh Dickinson team that also sports a 3-0-0 mark with wins over Lafayette, Manhattan, and Yale.  Army will follow that up with another difficult contest on Saturday when they travel to tangle with a high flying Air Force side that opened the 2017 campaign with victories over Missouri State, FGCU, and Drake.

Evansville – The Purple Aces improved to 3-0-0 when they escaped with a 3-2 win in overtime over Milwaukee on Saturday night with Ian McGrath netting the game-winning goal in the 104th minute of play.  Evansville opened the season with a 9-0 win over Anderson with Adam Snow recording a hat trick  and then traveled to Huntington where they topped Marshall  1-0 with McGrath netting the game-winner from fifty yards out.  The Purple Aces out of the Missouri Valley Conference will seek to keep the magic and their win streak alive when they host Northern Illinois on Monday and then travel to Phoenix to square off with Grand Canyon on Thursday.

Loyola University Maryland – The Greyhounds (2-0-1)  remained undefeated after a scoreless tie against William and Mary in a downpour on Friday night in a contest that was halted at the end of regulation due to the poor weather conditions.  Freshman Chase Vosvick had seven saves between the pipes in the tie with William and Mary.  Loyola University opened the season with  a 5-4 goal fest win on the road in overtime against LaSalle followed by a 1-0 victory at home over St. John's with forward Nico Brown netting the lone goal and Vosvick having a two save evening.  Six different Greyhounds have contributed a single goal to date.  Loyola University Maryland will put their undefeated record on the line when they host Pittsburgh out of the ACC at the Ridley Athletic Complex on Monday night and Villanova out of the Big East on Saturday.

Georgetown – The Hoyas have been impressive to date with a 2-0 win over American on the road,  a 3-0 win over Coastal Carolina, and a 3-1 win over Cal Poly. However the action is about to heat up with a home contest against visiting UCLA on Monday and a game on the road with UConn on Saturday.  Forward Achara has powered the Georgetown attack with four goals  attack and JT Marcinkowski has anchored a defense that has allowed only one goal in three contests.  Brian Wiese stated, "We've got a lot of good players and the young guys have been really good for us which is refreshing to see."  The next week should give Wiese a good glimpse into just how good his 2017 team is going to be.

Furman – The Paladins improved to 3-0-0 when they traveled to Denver and upset the highly regarded Pioneers 1-0 to bring to a closure Denver's thirty-seven match regular season unbeaten streak.  Junior midfielder Danny Kierath contributed the game-winner for Furman after making a good run down the center of the pitch and finishing a pass received from teammate Rocky Guerra.  Redshirt freshman Ben Hale who sat out the 2016 season due to injury has been very solid in goal for the Paladins who arrived in Denver after opening the 2017 season with wins over the College of Charleston and Georgia Southern. Whether the Paladins can keep their win streak alive remains to be seen since they have another tough contest in front of them when they tangle with an Air Force team on Sunday that is also 3-0-0 and is coming off a 2-0 win over Drake on Friday.

Omaha – The Mavericks out of the Summit League slipped past Houston Baptist 1-0 on Friday with forward Elvir Ibisevic  contributing the game-winning goal with an assist from defender Miguel Gomez to enhance their record to 3-0-0. The goal was Ibisevic's  third to date and the assist was Miguel Gomez's third to date.  Omaha will seek to win their fourth consecutive contest when they tangle with UTRGV on Sunday evening.  Jason Mims stated, "For our guys, it was good to see another good performance, especially for the first road trip with temperatures around 100 degrees at kickoff."  The Mavericks also have a 2-1 win over Grand Canyon and a very impressive 5-1 win over Virginia Tech.  Look for the action to continue to heat up as the season progresses for an opportunistic Omaha team that just begin competing at the Division I level in 2011.