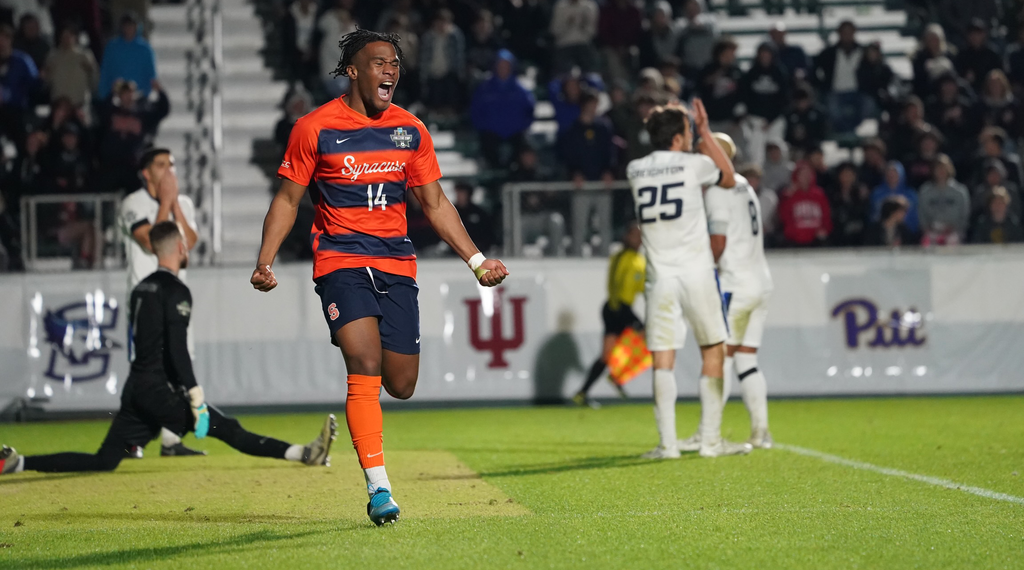 Creighton Twice Came Back From A goal Down To Knot The Score With Syracuse But A Persistent Syracuse Team Prevailed 3-2 To Advance To The National Final For the First Time In Program History. Rock Solid Team Defense And an opportunistic attack gave indiana the edge they needed to top A Pittsburgh team That was never able to fully get their attack in gear. By Brian Ludden

In the evening’s first matchup, Creighton, who had already taken down #2 Washington and #7 Duke earlier in the tournament, looked to ride the nation’s leading scorer, Duncan McGuire, to an upset victory over #3 seed Syracuse.

Creighton was the better side in the first half, generating plenty of chances and testing Syracuse keeper Russell Shealy. Callum Watson rattled the crossbar with a free kick in the 29th minute, while McGuire had multiple shots saved by Shealy and another one cleared off the line by a Syracuse defender.  It seemed as if Creighton would open the scoring, but it wasn’t to be.  Just a few minutes after a mental mistake by Creighton keeper Paul Kruse gifted Syracuse a corner, the Orange earned another corner kick, where Kruse couldn’t hold onto the ball served in by midfielder Curt Cavlov, and Christian Curti was able to pounce on the loose ball and give the Orange a 1-0 lead going into halftime. Curti’s first goal of the year could not have come at a more opportune moment.

Early in the second half though, Creighton was able to find the breakthrough they were looking for.  After a Syracuse turnover in the midfield, Watson was able to play a ball over the top for McGuire, and with Syracuse defender Abdi Salim on his back, McGuire was able to cleverly clip the ball past Shealy and into the back of the net.  However, the celebrations didn’t last long, as Syracuse responded almost instantly.  A Creighton turnover led to an immediate opportunity for Syracuse, and a through ball from Jeorgio Kocevski found Nathan Opoku, who calmly slotted it past Kruse, and ‘Cuse regained their advantage.

As Creighton continued to aggressively search for an equalizer, there were a few tense moments for the Blue Jays and their fans, as McGuire went down in the 63rd minute with what seemed to be a shoulder injury.  Graduate Student Alfie Pope came on to replace McGuire, and made an immediate impact.  A long throw-in by Watson in the 64th minute was flicked on by Luke Mitchell and fell to Pope, who put it past Shealy to make it 2-2.

As the match approached the end of 90 minutes and was seemingly headed for extra time, Syracuse was able to generate one more opportunity, as Opoku beat his man down the right side and found space to play a low cross through the box.  Levonte Johnson was able to get free from his defender and was alone at the back post, where he easily tapped in Opoku’s cross from close range. The dynamic duo up top of Opoku and Johnson were able to come up with the big play needed to give Syracuse the lead once more.  Creighton were able to create some last-gasp Hail Mary chances, including multiple corner kicks, but could not find that third equalizer, and Syracuse held on for the 3-2 win.

An explosive Creighton team became only the third team this year that was able to put two goals in the back of the net against Syracuse. Regardless netminder Russell Shealey was a difference maker for the Orange making several big stops in goal. Syracuse improves to 18-2-4 to set a new program record for wins in a single-season. The Orange will seek to break that record when they face Indiana on Monday with the National Championship on the line.

Orange head coach Ian McIntyre acknowledged the grit his team displayed and the back and forth nature of the contest when he stated, “Two teams got after it today, thankful for the toughness on our team to get us by this match.”

A talented and determined Creighton side gave it their all. The Bluejays close out an outstanding season under head coach Johnny Torres in which they made an incredible, gutsy, and improbable run to return to the College Cup for the first time since 2012. The future looks bright for the Bluejays.

After a 2-1 win over top overall seed Kentucky in the third round, Pittsburgh came to Cary hoping to knock off another seeded team in #13 Indiana, as well as get revenge after their 1-0 loss to the Hoosiers at this same stage back in the 2020 tournament. Indiana, meanwhile, was hoping to get back to another College Cup final after falling to Marshall in the aforementioned 2020 College Cup.

Indiana had the better chances throughout the first half, and unlike the night’s first game, the chances eventually led to a goal for Indiana.  In the 14th minute, a Ryan Wittenbrink shot was initially saved by Joe van der Sar, but fell right to the feet of Herbert Endeley, who was taken out by Pittsburgh defender Mateo Maillefaud, leaving the referee no other option but to point to the spot.  Wittenbrink’s initial penalty was poor and was saved by van der Sar, but the rebound fell right back to Wittenbrink who followed up his missed shot and easily put it away to give Indiana the lead.

Pittsburgh wasn’t able to create many chances throughout much of the first half, besides the occasional somewhat-hopeful cross.  Jackson Walti was able to force Indiana keeper JT Harms into some action, but Harms was up to the task.  Indiana put some more pressure on late in the first half, and it ended up paying off as a blocked shot was gathered by Tommy Mihalic, who took a touch and fired past van der Sar from a nearly impossible angle, doubling Indiana’s lead just seconds before halftime.  When asked about the goal, Mihalic gave a simple response: “I worked to get there, and you know, catch the goalie off guard, and I did.” Yeah, “expletive deleted” it. Truly some words of wisdom from the sophomore.

Goals in the closing minutes of a half in any sport more often than not result in a shift in momentum. A one goal Hoosier lead with 45 minutes left to play seemed manageable for Pitt but a two goal deficit against an Indiana team that had not allowed a goal in their three subsequent NCAA Tournament wins was a much more difficult task.

Unfortunately for Pittsburgh, the second half was much of the same, as Indiana was able to play freely with their two goal lead.  The Hoosiers were able to do as they pleased, maintaining possession and limiting the Pittsburgh attacks.  Pitt was able to manufacture a few scoring chances, with Jackson Gilman rising up and putting a head on a corner kick, forcing Harms to make a save.  Bertin Jacquesson had Pittsburgh’s best chance of the night, as his header in the 75th minute forced an excellent save from Harms to keep Pitt off the board.

Sam Sarver could’ve made it three for Indiana in the 80th minute, but his shot could only find the side of the net.

At the end of the day, Pittsburgh were just unable to do anything worthwhile on the attacking side of the ball, and a few defensive mistakes ended up being their downfall.  Pitt had chances but they always seemed to be one touch, one step, one run, or one pass away from finding a seam in a stout Indiana defense that consistently got numbers behind the ball.

As Pittsburgh head coach Jay Vidovoch explained, “The first goal hurt us, but the second goal killed us.” It was quite clear that the second Indiana goal right before halftime really did take the wind out of their sails, and Pitt just couldn’t get back into the game, which ultimately made the difference in the end.