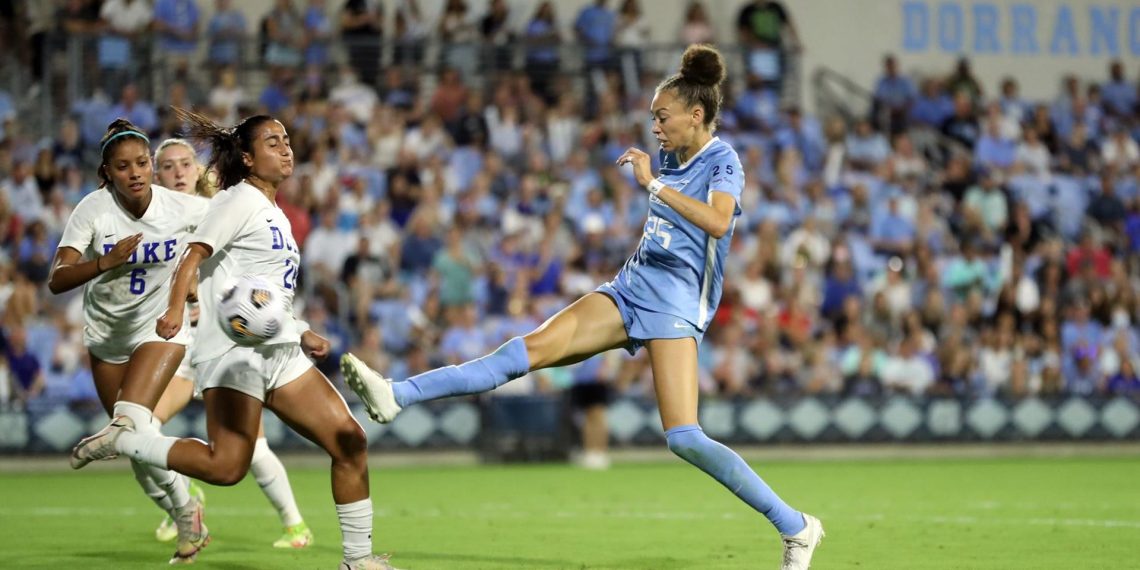 #1 Florida State (10-0-0) at #18 Clemson (7-3-0) – Friday 7 p.m. – Clemson will have their hands full trying to control a multi-dimensional Seminole attack that is averaging 3.4 goals per contest. FSU looks unstoppable and on paper should dominate but Clemson is 5-0-0 at home so this one could be close.

Look for the play of Seminole forward Jenna Nighswonger (2g, 8a) and midfielder Clara Robbins (4g, 5a) and Tiger midfielder Megan Bornkamp (8g, 5a) and defender Renee Guion (1g, 10a) to be a factor in the outcome.

Virginia has momentum and has been doing a great job of coming up with the big play they need to prevail in high profile contests as reflected in 1-0 wins over West Virginia, Santa Clara and Duke. North Carolina lost to Duke 1-0 and then tied Virginia Tech in back-to-back contests at home. In the contest with Virginia Tech the Tar Heels were two goals down but scored twice in the final nine minutes of play to secure a tie. North Carolina can’t afford to place themselves in a similar hole against Virginia.

Look for the playmaking ability of Virginia forward Haley Hopkins (3g, 4a) and North Carolina midfielder Rachel Jones (2g, 4a) to have an impact in this one.

The Razorbacks have won eight straight after opening the season with losses on the road to Duke and North Carolina. They are coming off signature wins over Texas A and M 1-0 and Ole Miss 4-1. Georgia is coming off a big 2-1 win over LSU in Baton Rouge.

Both of these teams have multi-dimensional attacks with explosive goal scorers. Arkansas features Anna Podojil (8g, 5a), Parker Goins (5g, 6a) and Taylor Malham (5g, 3a) among others. Georgia is powered by Mollie Belisle (12g, 1a), Daniella Murguia (7g, 8a) and Abby Boyan (4g, 7a) among others.

This one should be a dandy. Neither team can afford to come out flat.

In Auburn’s last four contests they have losses to FSU and Tennessee and wins over Georgia and Texas A and M. South Carolina had back-to-back losses to Clemson and Virginia Tech out of the ACC followed by wins over SEC opponents Missouri, Vanderbilt and Kentucky.

Both teams have very capable playmakers. This one is going to come down to which team is able to settle into a rhythm and control the tempo of the contest and which keeper South Carolina sophomore Maddie Prohaska or Auburn junior Heather HInz has the better day. This SEC battle could easily go either way.

This one will hinge on the ability of BYU led by senior midfielder Mikayla Coleman (7g, 5a) to break the code on a tenacious Gonzaga defense anchored in goal by junior Lyza Bosselman and senior backs Jordan Thompson and Haley Archuleta.

BYU is coming off a 2-1 loss in overtime to Utah State in which they had a commanding 30 to 6 advantage in shots but were unable to capitalize on it. This is the West Coast Conference season opener for both programs.

#24 Southern California (6-2-0) at #20 Arizona State (8-1-1) – Thursday 6 p.m. – This is a big week for Arizona State with contests at home against Pac-12 opponents USC on Thursday and UCLA on Sunday. Holding serve at home in Pac-12 play is crucial to standing in conference play.

The Aztecs are coming off a disappointing 2-2 tie with Washington on the road in which they had a 2-0 lead at halftime but were unable to close out the contest. Senior forward Nicole Douglas (11g, 4a) who is capable of scoring in multiples if not contained and senior midfielder Eva van Deursen who returned after missing two contests are key playmakers who will set the pace for Arizona State.

Southern California is coming off a good 2-1 win over Oregon State in which they came from a goal down to prevail. Junior Croix Bethune (6g, 2a) and senior Penelope Hocking (5g, 2a) give the Trojans a solid one-two punch that may cause problems for Arizona State. The Trojans have won six straight.

Both Arizona State and USC are very competitive teams but remain a work in progress in terms of their ability to consistently settle into a rhythm. Look for this one to be a game of ebbs and flows with the winner being the team that is able to keep focused and come up with the big play needed to turn the tide in their favor.