September 9, 2016 – What Happened Coast to Coast At A Glance 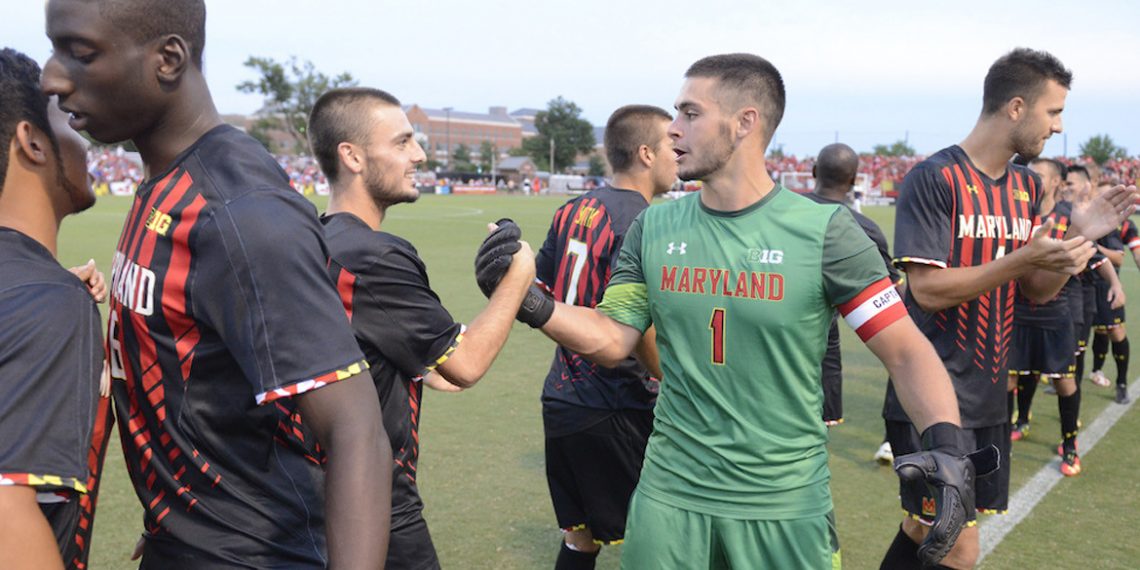 North Carolina 1 – Clemson 0 – In one of the marquee matchups of the evening the Tar Heels prevailed at Riggs Field with forward Zach Wright netting the game-winning goal in the 87th minute of play from twelve yards out after receiving a through ball from Cam Lindley. James Pyle had six saves in goal including a crucial stop of a penalty kick to record the shutout for UNC. The Tar Heels improve to 4-0-0 while Clemson drops to 3-1-0.

Maryland 1 – Indiana 1 (OT) – This blockbuster early season Big Ten contest ended in a tie. Richard Ballard placed the rebound of teammate Andrew Gutman's shot into the back of the frame in the 7th minute of play to give IU the early advantage and what appeared at one time to be the lone goal of the evening. However, Maryland showed a lot of grit when Alex Crongnale scored from six yards out in the 87th minute to tie it at 1-1.

Akron 2 – Oregon State 0 – Redshirt freshman midfielder Skye Harter netted goals in the 2nd and 13th minutes of the contest to give the Zips the edge they needed to get back in the win column. Jonathan Lewis had a two assist evening for Akron.  Sophomore Ben Lundt had three saves in goal to record the shutout.  The Zips tangle with UC Santa Barbara on Monday.

Syracuse 2 – N.C. State 0 – Senior forward Chris Nanco converted a penalty kick in the 16th minute and Oyvind Alseth scored out of a corner kick in the 74th minute to make it 2-0 Syracuse. Sophomore netminder Hendrik Hilpert had four saves in goal for the Orange to secure his third shutout of the year to date. Syracuse improves to 5-0-0.

Notre Dame 4 – Virginia Tech 1 – The Irish secure yet another impressive win with center back Brandon Aubrey contributing a hat trick. Blake Townes placed a rebound in the back of the net in the 13th minute to give the Irish the early advantage. Sam Essome converted a penalty kick for the Hokies in the 86th minute. Notre Dame improves to 5-0-0. Virginia Tech drops to 4-1-0 with their first loss of the still young 2016 season,

Creighton 3 – Pennsylvania 0 – Peter Prescott scored in the 31st minute and Joel Ryndstrand added two goals in the second stanza to power Creighton past Penn to the delight of the crowd on hand at Morrison Stadium in Omaha. Alex Kapp had two saves in goal to secure the shutout for the Bluejays who up their record to 2-1-1.

Butler 4 – UC Santa Barbara 2 – The Bulldogs make the big plays needed to come up with a huge win over the Gauchos. Defender Mitch Ostrowski slotted a deflection into the goal and midfielder Lewis Suddick scored out of a free kick in the first half of play for Butler. Senior forward David Goldsmith scored two goals in the second half of play to put this one on ice over a very talented UCSB team. The Gauchos drop to 4-1-0. Butler improves to 3-0-1.

Denver 4 – UC Riverside 1 – The Pioneers improve to 4-0-1 with a good win at home. Junior center back Kortne Ford scored out of a set piece in the 21st minute for Denver. Kenny Akamatsu, Scott DeVoss, and Blake Elder netted the other Denver goals.

Loyola Chicago 2 – Utah Valley 0 – The Ramblers are off an running with a 4-0-0 record to date. Grant Stoneman took advantage of a turnover in the box to give Loyola Chicago a 1-0 lead in the 21st minute of play. Connor Stevenson scored to make it a 2-0 game in the 75th minute to give the Ramblers an impressive early season resume and confidence building victory.  Utah Valley drops to 3-1-0.

Radford 4 – VCU 2 – Neil Martona scored twice for Radford. Fraser Colmer and Evan Szklennik added a goal each to power Radford to a come from behind win over VCU. Francesco Amorosino scored both of VCU's goals in a losing effort.

Louisville 2 – Pittsburgh 0 – Louisville got on the board in the 21st minute in this ACC contest as a result of an own goal. Forward Mohamed Thiaw gave the Cardinals a little breathing room when he scored in the 56th minute with an assist from Tim Kubel. Lousiville gets back in the win column to improve to 3-1-1 while Pitt drops to 1-2-1 year to date.

West Virginia 1 – ETSU 0 (OT) – Freshman midfielder Logan Lucas' first goal at West Virginia was a big one. Lucas netted the lone goal of the evening in the 100th minute of the match to enable the Mountaineers to slip past ETSU. The win was the 100th for Marlon LeBlanc as the WVU head coach.

Providence 1 – SMU 0 – Brendan Constantine netted the lone goal of the evening in the 78th minute of play to give the Friars the edge they needed to claim the victory. Providence improves to 3-2-0 while SMU drops to 2-3-0.

Gonzaga 3 – American 1 – Sam Olson and Austin Giftopoulos scored for Gonzaga in the first stanza. Dale Ludwig responded for American to close the gap to 2-1 when he placed a rebound into the back of the frame to make it 2-0 at intermission. Christo Michaelson netted the insurance goal for Gonzaga in the 70th minute.

North Florida 4 – FIU 3 – Milan Kovacs and and Micah Smoak contributed a single score each and Josh Castellanos scored twice including the game-winning goal to give North Florida the win in this high scoring contest.

Xavier 4 – Cincinnati 2 – In this rivalry match, Cincinnati roared out to a 2-0 advantage behind goals from Jack Clark and Elliott Williams but Xavier erupted with four unanswered goals in the final 33 minutes of play to come from behind to claim the win. Matt Nance, Jalen Brown, Todd Pratzner, and Derrick Otim netted the goals for Xavier.

Pacific 4 – UNLV 2 – Tyler Fox scored twice and Spencer Vue and Wouter Verstraaten contributed a goal each to power Pacific past UNLV. Memo Diaz and and Timo Mehlich scored for UNLV.

Portland 2 – Evansville 2 (OT) – Evansville jumped out to a 2-0 advantage but Portland came roaring back to tie it up. Eddie Sanchez and Eric Edwardson scored for Portland.  Ian McGrath and Ryan Koenig scored for Evansville.

Vermont 3 – ODU 1 – Vermont roars out to a 5-0-0 record.  Bernard Yeboah netted the first goal for Vermont. Doni Pollock scored for ODU in the 41st minute to tie it at 1-1.  Loftur Eriksson responded for Vermont to make it 2-1 in the 62nd minute of play and Shane Haley scored the insurance goal in the 74th minute.

Rhode Island 1 – Stetson 0 – Niklas Middrup netted the lone goal of the evening for Rhode Island with an assist from Peder Kristiansen. Junior Nils Leifhelm had a four save evening between the pipes to secure the shutout in goal. Rhode Island will face UAB Sunday in the Soccer For A Cure Classic. The Rams are 3-1-1 while Stetson drops to 2-2-1.

UNCW 3 – Dayton 0 – Junior forward Julio Moncada alertly took advantage of a Dayton turnover in the first minute of play when he sent a shot into the back of the frame to give the Seahawks the early lead. Sophomore David Lozano converted a penalty kick to up the lead to 2-0. Junior forward Stian Sandbekkhaug put it on ice when he scored the third UNCW goal in the 78th minute. UNCW improves to 3-0-0. Dayton drops to 2-3-0 year to date.

Fort Wayne 4 – Bradley 3 (OT) – This back and forth contest came down to who was going to score the last goal. Thilo Korperich provided the game-winner for Fort Wayne when he found the back of the net at close range with an assist from Keelan Barker in the 99th minute of play.