Reflections on the 2019 NCAA Tournament 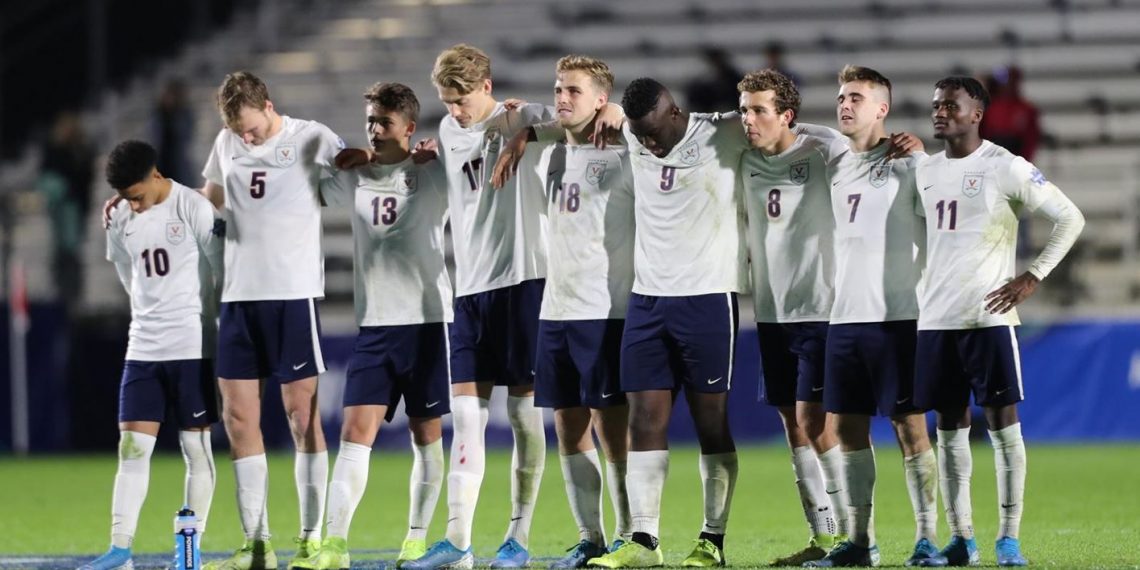 A look back and a few thoughts about the 2019 NCAA Tournament.

Championship contests, like the Super Bowl, often don’t live up to the hype surrounding them. Sunday’s College Soccer National Championship match in which Georgetown prevailed 7-6 in a penalty kick shootout with Virginia after the contest was tied 3-3 at the conclusion of regulation and two overtime periods lived up to the hype and then some.

For starters, the Cavaliers and the Hoyas were ranked in the number one and two spots in both the United Soccer Coaches and College Soccer News regular season ending polls. Virginia was the number one seed in the NCAA Tournament and Georgetown the number three seed. Virginia won the Atlantic Coast Conference Coastal Division regular season title and the ACC Tournament. Georgetown won both the Big East Conference regular season and tournament titles.  Both teams had explosive finishers, linkmen with get vision and touch on the ball, rock solid defenders with the ability to push forward out of the back to add an additional dimension to the offense, goalkeepers who were composed and talented shot stoppers, and veteran coaches who know what it takes to win at the highest level.

Both teams had the balance between offensive productivity and tenacity on the defensive side of the ball that yields the confidence as well as the trust on both sides of the ball among teammates that must exist in order to play an attack-oriented style of soccer that is both exciting to watch and play.

A penalty kick shootout always seems like a harsh and inadequate way to decide a national champion particularly when both teams are as deserving of a national championship as Georgetown and Virginia. However, in this particular contest it seemed to be an appropriate, although abrupt and heartbreaking way to settle the contest, because both teams had given it their all for a full one-hundred and ten minutes of play leaving nothing on the field of play. Neither team packed the back or hunkered down in a defensive mode as time ran down hoping that a shootout might provide the best opportunity to prevail.  Had either team secured a two-goal advantage the tempo may have changed but that didn’t prove to be the case. This one was worthy of the talent that both teams have.  It was a run and gun game from the get-go with both teams taking it to their opponent.

It was a great win for the Hoyas and a heartbreaker for the Cavaliers but the bottom line is that Georgetown (19-1-4) and Virginia (21-1-2) put forth an effort on the greatest stage in college soccer in a manner that reflected well on their institutions, college soccer, and the individual participants.

You have to go back to the 2012 College Cup semifinal in which Georgetown advanced past Maryland in a penalty kick shootout after the contest was tied at 4-4 after 110 minutes of play to find a game in the Final Four that was as fast paced and exciting as this one.

The results on the field of play pretty much affirmed the seeding of the tournament selection committee. Only number twelve seed Saint Mary’s, number fourteen seed UC Davis and number fifteen seed Penn State were one and done in the tournament. Seven of the eight teams in the Elite Eight were top eight seeded teams and the number one, three and four seeds advanced to the Final Four along with number seven seed Stanford.

In the one and done environment of the College Cup it seems at times that a lot of contests end up requiring a penalty kick shootout to determine who advances. That was not the case this year with only four of the games in the tournament going to a penalty kick shootout. Stanford vs. Seattle and Wright State vs. Michigan  were determined by a pk shootout in the second round, Stanford and Clemson in the Elite Eight, and Georgetown and Virginia in the national championship match.

In the west coast vs. east coast debate the teams on the west coast made their presence known in the tournament with Stanford, Washington and UC Santa Barbara playing their way into the Elite Eight and Stanford earning a spot in the College Cup (Final Four).  Stanford had wins over Seattle, Virginia Tech and Clemson. Washington topped Boston College and Marshall. UC Santa Barbara defeated California, Saint Mary’s and Indiana.

An unseeded team always makes an unexpected run in the NCAA Tournament.

In 2017 Fordham advanced to the Elite Eight via wins over St. Francis Brooklyn, number eleven seed Virginia and number six seed Duke.  In 2018 unseeded Akron and Michigan State advanced to the College Cup.  This year unseeded UC Santa Barbara rebounded from a loss in the Big West Tournament final to make a run in the NCAA Tournament to the Elite Eight. The Gauchos topped California 3-1, number twelve seed Saint Mary’s College 4-0 and Big Ten Champion and number five seed Indiana 1-0 before falling to Wake Forest 1-0 in the Elite Eight.  The Gauchos are back.

Playing at home is always considered an advantage.

In the second round thirteen of the sixteen seeds that hosted won and three lost.

The Atlantic Coast Conference had ten teams in the forty-eight team NCAA Tournament Field. Eight of the ten teams won at least one game. Five ACC teams advanced to the Sweet Sixteen, three to the Elite Eight and two to the Final Four.

How accurate a measure is the RPI?

What a Difference A Year Makes

Clemson – The Tigers rebounded from a 7-9-1 2018 season to a stellar 18-2-2 season in which they were awarded the number two seed in the NCAA Tournament and advanced to the Elite Eight.

All three of SMU’s and Clemson contests in the NCAA Tourney went into overtime.

The Mustangs edged Coastal Carolina 1-0 in the 108th minute of play. They topped UCF 2-1 eighteen seconds into overtime and lost to Virginia 3-2 with Joe Bell converting the game-winner for the Cavaliers in the ninety-fifth minute of play.

The Tigers defeated Charlotte 2-1 with Grayson Berber providing the game-winner in the ninety-fourth minute and they advanced past Providence 2-1 when Robbie Robinson converted a penalty kick in the 105th minute of play.  Stanford advanced past Clemson 5-4 in a penalty kick shootout after the contest was tied 1-1 at the end of 110 minutes of play.

Georgetown scored a total of seventeen goals in five NCAA Tournament contests while allowing five. The Hoyas set a new program record for wins in a season with a 20-1-2 record that included a seventeen-game unbeaten streak.

Its not often that a team is able to successfully split time between two goalkeepers and remain organized on the defensive side of the ball. Georgetown was the exception this year with sophomore Giannis Nikopolidis and freshman Tomas Romero alternating contests in goal.  Both started a total of twelve games. Nikopolidis allowed a total of six goals with a goals against average of 0.49. Romero allowed a total of eight goals with a goals against average of 0.64. They continued to rotate games in the NCAA Tournament with Romaro in goal in the contests with Pitt, Washington and Virginia and Nikopolidis in goal in the contests with Louisville and Stanford.

Upward Movement In The Polls

Based on their run to the Elite Eight UC Santa Barbara moved from the number twenty-two spot to the number eight spot in both the College Soccer News and the United Soccer Coaches polls. Virginia Tech, Providence and Louisville who advanced to the Sweet Sixteen also rocketed upward.

Key Goals – There Were Many But Several Standout

Sophomore forward Grayson Barber's golden goal three minutes into overtime to give Clemson a 2-1 win over Charlotte in the second round of play.

Senior forward Will Bayham’s game-winning blast into the upper right corner of the goal in the 102nd minute of play to give UC Santa Barbara a 1-0 win over Indiana in Bloomington in the Sweet Sixteen.

Senior back Alistair Johnston’s move to create the space he needed to send a shot into the right corner of the frame in the forty-fourth minute that gave Wake Forest the edge they needed to secure a 1-0 win over UC Santa Barbara in the Elite Eight.

Junior midfielder Jacob Montes goal out of a free kick from the top of the box in the seventy-second minute of play in the Elite Eight that gave Georgetown new life after trailing Washington by a goal for most of the contest.

Sophomore forward Daryl Dike’s goal into the side net in the nineteenth minute of play after running onto a long pass from freshman back Andreas Ueland that gave Virginia an early 1-0 advantage over Wake Forest and switched the momentum from the Deacon Deacons to the Cavaliers.

Sophomore midfielder Zach Riviere’s blast into the back of the frame from a few yards outside the center of the box in the fourth minute of play that gave Georgetown an early 1-0 lead over Stanford on a heavy rain-soaked field in the semifinals of the College Cup. The goal got Georgetown off to a great start and caused Stanford to have to chase the game.

Junior midfielder Paul Rothrock’s goal from close range in the sixteenth minute of play for Georgetown in the Championship Contest that evened the match with Virginia and kept Georgetown from having to chase the game after the Cavaliers had taken an early 1-0 lead with a goal from Joe Bell in the tenth minute of play.

Virginia sophomore forward Daryl Dike’s placement of the rebound of his own shot into the back of the frame with a little over nine minutes remaining in regulation to erase Georgetown’s 3-2 advantage and subsequently send the contest into overtime.

Kudos to the Folks at Cary

The conditions were less than ideal in the semifinals of the College Cup on Friday night due to the duration of the steady rainfall that resulted in standing water on places on the field. Nonetheless the grounds crew did a yeoman’s job of working to keep the field playable under the conditions.