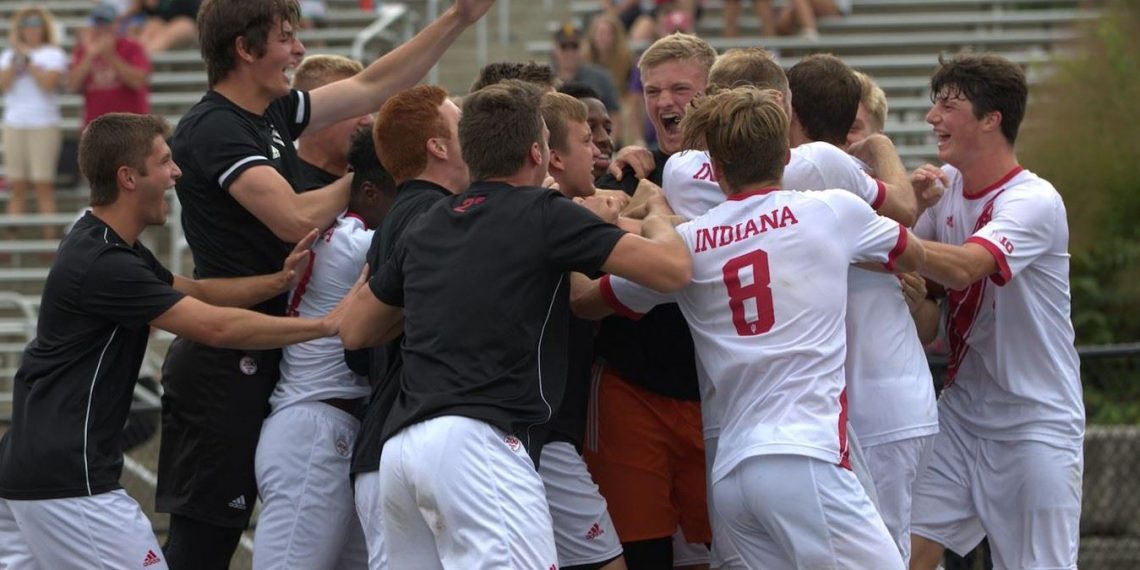 Xavier – The Musketeers needed something to build on after an injury plagued 2018 season derailed their momentum. They got it with a season opening 2-0 win over number three ranked Akron. The new and the old combined to secure it. Freshman Karsen Henderlong and senior Samson Sergi provided the goals while transfer redshirt junior Matthew Rosenberg had six stops in goal to anchor the defense. Xavier has a history of bringing their “A” game when facing ranked opponents which is a plus but the key to a successful season in 2019 will hinge on their ability to consistently maintain the same level of intensity when facing teams that are not ranked. They accomplished that by topping Eastern Illinois on Monday 3-0 with sophomore Felix Boe-Tangen contributing a goal and Sergin again coming up big with two goals.

Xavier’s immediate dance card includes a rivalry match on Friday against Cincinnati and a high-profile contest against a very good Kentucky team on the road the following Wednesday.

Coastal Carolina – The Chanticleers needed a confidence builder after their string of eight consecutive appearances in the NCAA Tournament came to an end last year. They accomplished that plus more. Coastal Carolina entered the 2019 campaign with the challenge of integrating sixteen newcomers in with returning players and questions regarding who was going to fill the void that existed on the offensive side of the ball due to the graduation of Yazeed Matthews (13g, 3a).  A 3-1 preseason loss to Clemson and a 4-1 preseason loss to Duke didn’t bode well for the Chanticleers season opening road trip to the west coast to face a ranked Oregon State team on Friday and a ranked Portland squad on Sunday.

Oregon State took a 1-0 lead into halftime and looked to be on track to prevail but Coastal Carolina took control in the second half with goals from Cladio Repetto and Tyrone Mondi and a rock-solid defensive effort that contained a potent Oregon State attack to claim a solid 2-1 come from behind victory. The Chanticleers then upset Portland 1-0 with Emile Rzepecki providing a game-winning header in the second half. Goalkeeper Alberto Cirol, who was named the Sun Belt Conference Defensive Player of the Week after a ten save weekend, anchored a very solid Coastal Carolina defense.

Things don’t get any easier for the Chanticleers.  Coastal Carolina faces another ranked opponent when they travel to face Charlotte at Transamerica Field on Friday.

Florida Gulf Coast University – The Eagles were absent from the NCAA Tournament field the past two seasons. Their 2018 season came to an abrupt and unexpected end when they came out on the short end of a penalty kick shootout with sixth seeded Stetson in the semifinals of the ASUN tournament. The momentum that the program had generated after initially becoming eligible for post season play in 2011 seemed to have stalled. But FGCU emerged as a potential force once again on the national scene with a season opening 4-3 win over Michigan in Ann Arbor via an attack powered by three goals from senior midfielder Ryan Medilah. The Eagles followed that up with a solid 1-1 tie in East Lansing with a highly regarded Michigan State team.

FGCU will seek to build on their early season success when they host Seton Hall on Friday and Georgia Southern on Sunday.

St. John’s – The Johnnies took to the road and topped a good Appalachian State squad 2-0 and a ranked North Carolina State squad 1-0 in overtime to begin the season with a 2-0-0 mark for the first time since the 2008 campaign.  The win over NC State was St. John’s first win over a team out of the Atlantic Coast Conference since 2010.  Senior midfielder Matt Forster and sophomore forward Josiah Crawford were responsible for the goals in the win over Appalachian State. Sophomore Tani Oluwaseyi scored the game-winner in overtime in the win over NC State. Sophomore center backs Matt Chandler and Luke Hanson anchored a defense that produced two shutouts.  This is a relatively young St. John’s team that should continue to improve as the season progresses.

The Johnnies host Manhattan on Friday and welcome Iona to Belson Stadium on Tuesday.

Clemson – The Tigers under Mike Noonan are among the high-profile programs who entered the 2019 season seeking to increase their win total and move upward in conference play after a down year by their own standards last year. The jury is still out but count Clemson among the teams that made a great first impression with a very productive 4-1 win over in-state rival South Carolina and an 8-0 wood shedding of Detroit Mercy.

Clemson hosts UNCG on Friday and USC-Upstate on Monday before things get really serious when they begin ACC play on Friday, September 13 against Notre Dame in South Bend.

Wake Forest – The Demon Deacons held serve as the number one team in the College Soccer News Poll with solid season opening wins against UCF 2-1 and Creighton 1-0.  Bruno Lapa and Kyle Holcomb scored in the win over UCF. Freshman Calvin Harris netted the lone goal in the win over the Bluejays.  The Demon Deacons have plenty of offensive firepower.  Improvement on the defensive side of the ball looks to be among the critical success factors for Wake Forest in 2019.  In that regard, backs redshirt junior Michael DeShields, senior Eddie Folds, and freshman Nico Benalcazar and redshirt sophomore goalkeeper Andrew Pannenberg looked very good in the first two contests.

Wake Forest hosts Dartmouth out of the Ivy League on Friday.

Stanford – The Cardinal displayed a ton of composure and offensive balance with wins on the road against Penn State 5-0 and Akron 2-1.  That pretty much sums up a great start to the 2019 season for Stanford.

Indiana – The newcomers had to contribute for the Hoosiers and they did. IU came from two goals behind to top Pittsburgh 3-2 in overtime and a goal down to top UCLA 2-1 in overtime. In the contest with Pittsburgh freshman forward Joshua Penn and redshirt junior forward Ian Black scored in regulation and freshman Herbert Endeley netted the game-winner in overtime.  In the win over UCLA, freshman Victor Bezerra scored in regulation and sophomore Jack Maher netted the game-winner in overtime. Both wins were great confidence builders and learning experiences for a young team but the Hoosiers will be courting danger if they continue to put themselves in situations where they have to come from behind.

Indiana travels to South Bend to tangle with Denver on Friday and Seattle on Sunday.

Connecticut – The Huskies entered the season with unanswered questions in regard to offensive productivity due to the departure of Abdou Mbacke Thiam and defensive effectiveness after allowing a total of thirty goals last year.  Transfer forward Jordan Hall scored twice in a 2-0 win over Rider and three times in a 3-1 win over Rhode Island to provide offensive firepower.  The effort on the defensive side of the ball was very promising.

Long Island University – The Sharks, who were predicted to finish fifth in the Northeast Conference Preseason Poll, began the season with two impressive on the road wins. The first was a 2-1 come from behind victory over Old Dominion University. Sophomore Athanasios Coutroumpas converted a header in the eighty-second minute to tie the contest at 1-1 and freshman Papa Ndoye contributed the game-winner with his left foot in the eighty-sixth minute.  Senior Matias Pesallaccia had six saves in goal for LIU.  The Sharks followed their season opening win with a 1-0 victory over VCU at Sports Backers Stadium in Richmond with junior Chris Capaldo using his left foot to score the lone goal of the contest out of a corner kick. Pesallaccia and freshman Selcuk Kahveci shared the shutout in goal for LIU.

LIU will seek to seek to build on an excellent start when they face Saint Joseph’s on Saturday.

Virginia – The Cavaliers under the direction of George Gelnovatch entered the season needing to continue to play well on the defensive side of the ball while improving the playmaking and productivity of their attack.  They did just that in a 2-0 season opening win over Pacific followed by a huge 2-0 win over defending national champion Maryland. Junior midfielder Irakoze Donasiyano scored twice and goalkeeper Colin Shulter anchored a tenacious defense in the win over Pacific. Forwards Nathaniel Crofts Jr. and Daryl Dike provided the goals in the win over the Terps while Shulter anchored a Cavalier defense that limited Maryland to just five shots.

Creighton – The Bluejays seek wins but nonetheless you have to be impressed with the talent and grit Creighton displayed in a 2-2 season opening tie in Chapel Hill with North Carolina and a 1-0 loss to Wake Forest in Winston-Salem. It was a positive and very promising start for the Johnny Torres era in Omaha.

Creighton will seek to secure their first win of the 2019 season when they host Akron on Friday.

Rutgers – The Jim McElderry era at Rutgers began with a 2-0-0 record that included a season opening 1-0 win over Temple at the Temple Sports Complex and a 2-1 come from behind win over Drexel in Philadelphia.  Six freshmen were in the starting lineup in the first contest and seven in the second.  Freshman Jorgen Wisth Lie converted a penalty kick in the win over Temple while freshman Oren Asher had two saves in goal to record the shutout.  Jorgen Wisth Lie converted another penalty kick and freshman midfielder Jackson Temple netted the game-winner in the win over Drexel.