Men’s College Soccer. Conference Roundup. A Look At Some Of The Many Gut Check Contests This Weekend In Conferences Coast To Coast. 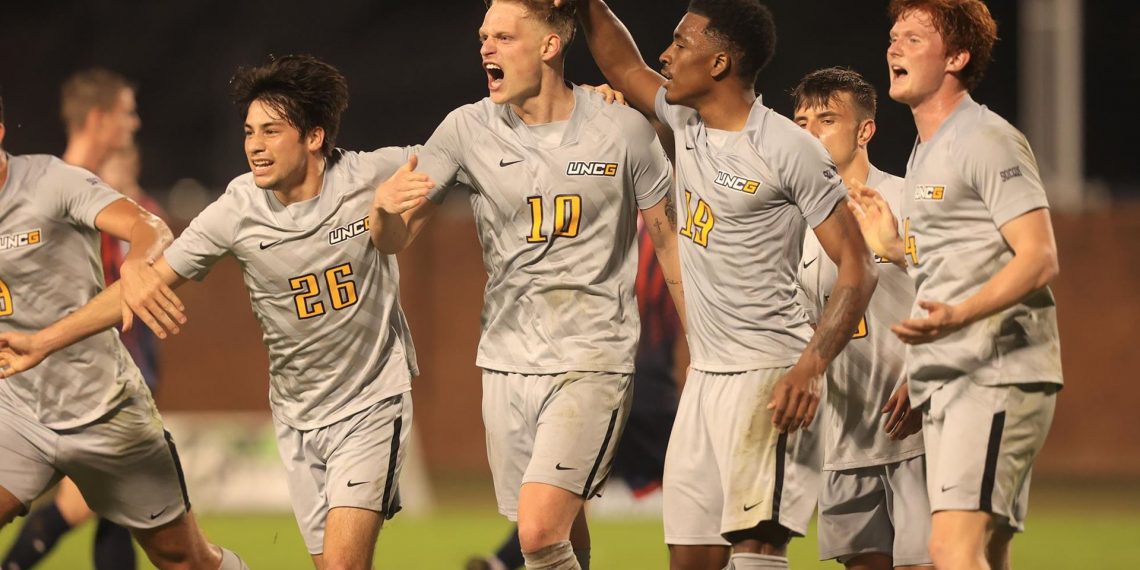 Teams Have Little Margin For Error With Automatic Berths In The NCAA Tournament At Stake.

Number one seed New Hampshire (6-0-1) and number two seed Vermont (4-1-1) are the frontrunners but first New Hampshire has to get by Hartford (3-2-1) and Vermont past newcomer NJIT (4-4-1) in order for the two teams to meet in the championship on Sunday at 4.

New Hampshire has improved as the season has progressed and is the favorite but they can’t look past anyone and have to take it one game at a time.

Number two seed Tulsa faces number three seed Temple in one semifinal on Thursday in Orlando. Number one seed UCF tangles with number four seed SMU in the other. The winners will face each other in the championship match on Sunday.

Tulsa has had an impressive season but Temple has been a spoiler all year so don’t count them out. UCF started the season slow but has jelled as a team and looks to be playing their best soccer of the year at the right time of the year. SMU has not had the season they expected but they remain a dangerous team. UCF has advanced to the final for the past three seasons where they have lost to SMU. This year they have to get by the Mustangs in the semifinals to make it to the finals.

If UCF plays to their potential on both sides of the ball and stays focused – with an emphasis on the if – they should win it all this year.

Clemson topped Pitt 2-1 when the two teams met in the final of the ACC fall tournament. The Tigers did a really good job of attacking down the flanks and opening up space that they could exploit in that contest. Also, the pressure that they applied particularly in the first half of play hindered the Panthers ability to build their attack from the back and get the numbers forward that they needed to create mismatches.

Clemson has been without the services of All-ACC First Team selections forward Kimarni Smith and Grayson Barber and midfielder Philip Mayaka during the spring season as they elected to enter the professional ranks. Pittsburgh enters this contest with a ton of momentum and with the services of back Jasper Loeffelsend, the ACC Defensive Player of the Year, who didn’t play when the two teams met in the fall.

Whether or not those additions and subtractions will make a difference remains to be seen. Both these teams are talented and have the potential to make a deep run in the NCAA Tournament.

FGCU used to be the big dog in the conference but that has not been the case recently. The semifinal contests are up for grabs but don’t be surprised if Bellarmine, the new kid on the block, and Lipscomb advance to face each other in the championship contest on Saturday at seven in Jacksonville. Bellarmine topped Lipscomb twice during regular season play.

The margin for error in Big East play is very small so you can expect that to be the case in the tournament. Breakdowns on the defensive side of the ball will be costly. Seton Hall and Marquette have exceeded expectations with breakthrough seasons. Creighton has also had a season that they can build on in the future.

Georgetown remains the team to beat in the country and in the Big East conference. This is a very talented and deep team led by the likes of forward Derek Dodson and midfielders Dante Polvara and Sean Zawadski who are very capable playmakers. Junior Giannis Nikopolidis is rock solid in goal. Nonetheless it remains to be seen how well the Hoyas will respond to the challenge and opportunity of filling the rather big shoes that exist due to the departure of senior defender Rio Hope-Gund and senior midfielder Jacob Montes.

Number one seed High Point (11-1-0) will face number three seed USC Upstate (6-3-2) in the championship contest on Saturday at 7 at Vert Stadium in High Point. High Point slipped past UNCA 1-0 with midfielder Mason Marcey, a senior transfer from Valpo, providing the game-winning goal. USC Upstate edged number two seed Campbell in a match that was determined by a penalty kick shootout after it was tied 1-1 at the end of regulation and extra time.

High Point defeated USC Upstate 2-1 when the two faced each other in Spartanburg on March 27 with redshirt freshman forward Ashton Perkins contributing both goals for the Panthers. High Point has an explosive attack led by MD Myers (12g, 4a) and Sebastian Chalbaud (9g, 4a) that has produced a total of 35 goals while a very solid Panther defense has allowed a total of only six. If the Panthers settle in and do the things that they have done well all year they should prevail.

Indiana (9-1-0) will host Penn State (8-1-1) on Saturday at 5 with the Big Ten Tournament title and the conference’s automatic berth into the NCAA Tourney up for grabs. These two were scheduled to meet during regular season play but the contest was cancelled setting up this marquee tournament final. IU is difficult to beat in Bloomington but it can be done as UC Santa Barbara established when they upset the Hoosiers 1-0 in overtime in the third round of the 2019 NCAA Tournament.

IU is powered on the offensive side of the ball by sophomore forward Victor Bezerra (10g, 3a) among others with a blockbuster defense anchored in goal by sophomore Roman Celentano and senior back Spence Glass that has allowed a total of only two goals to date. This team has the look and feel of a vintage Indiana team but they could have their hands full against a Penn State team that comes into the championship match off an impressive 4-1 win over Michigan.  This is a really good Penn State team that is ranked by College Soccer News as the number 10 team in the country. The big question in this one is whether or not the Nittany Lions have the firepower to break the code and create an opportunity to penetrate a tenacious Indiana defense.

Charlotte travels to Huntington, West Virginia to face Marshall on Sunday at 2. If Charlotte wins or ties then they will secure the CUSA regular season title and the conference’s automatic berth into the NCAA Tournament.

The 49ers are 6-2-1 overall with a perfect 6-0-0 mark in conference play. Charlotte is playing well as a team but they have a very slim margin for error. They come into this match off 1-0 wins over FAU and FIU in which junior forward Preston Popp netted the lone goal. Marshall is 8-2-2 overall with a 5-0-1 mark in CUSA play. Marshall comes into the match off a 1-0 win over FAU and a 1-0 win over UAB. Both Charlotte and Marshall have done a good job of finding a way a win the close games.

This has the makings of a tightly contested one goal contest. Neither side is going to want to play from behind and have to chase the contest. Both teams will push to win it but the fact that Charlotte can claim the automatic berth with a tie gives them an edge in this one.

Number three seed Milwaukee (7-4-0) advanced to the title match by upsetting number two seed UIC 2-1 where they will face number one seed Northern Kentucky (7-1-0) at 4 on Saturday at NKU Soccer Stadium.

Northern Kentucky is the feel-good team of the 2021 spring season. The Norse who were picked as the number 8 seed in the Horizon League preseason poll has won seven in a row after opening the season with a 2-1 loss to Detroit Mercy.

NKU defeated Milwaukee 1-0 when the two teams faced each other in at NKU Stadium back on February 10. Northern Kentucky has not fared well overall in the past when facing Milwaukee so despite all the success that they have had to date their season will come down to this contest. The Norse will have to play their very best game of the year to secure a win in the rematch and earn the Horizon League’s automatic berth in the NCAA Tournament.

Belmont (7-2-2) faces UNCG (8-2-2) in the championship match on Saturday at 6 in Greensboro. Belmont upset number one seed Furman 3-1 to advance while UNCG topped ETSU 2-1 to advance. UNCG edged Belmont 3-2 when the two teams faced each other during regular season play on March 27 in Greensboro with an unusual ending. The Spartans converted a penalty kick with two ticks remaining in regulation to tie the contest at 2-2 and send it into overtime where freshman forward Theo Collomb (7g, 3a) netted the game-winner for UNCG in overtime.

Both teams look to be playing their best soccer of the year so this one should be a very competitive contests with ebbs and flows in the contest. It is going to come down to which team is able to settle in and finish the opportunities that come their way while remaining organized on the defensive side.  This one is up for grabs.

Washington (10-2-0) travels to face Stanford (8-2-1) on Saturday at 3 with the Pac-12 title and the conference’s automatic berth on the line. A win or a tie will yield the Pac-12 title to the Huskies. If they can pull that feat off it will be the first time in program history that Washington has won back-to-back Pac-12 titles.

Washington defeated Stanford 1-0 when the two squared off on March 20 in Seattle.

Look for the play of Stanford netminder Andrew Thomas and Washington goalkeeper Sam Fowler to factor into the outcome. More likely than not midfielder Dylan Teves and defender Charlie Ostrem will make an impact for Washington. Ditto that for forwards Zach Ryan (9g, 3a), Gabe Segal (6g, 1a) and Charlie Wehan (3g, 6a) for Stanford.

The winner will be the side that is able to put in a full ninety minutes of play. Look for Stanford to come out on the front foot and seek to apply pressure from the get-go. If the Cardinal is able to break through early and force Washington to chase the game they will prevail.