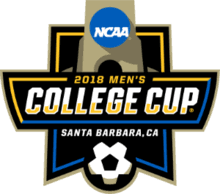 Akron (15-6-2) and Maryland (12-6-4) will face each other on Sunday night with the 2018 National Championship on the line.  Both teams advanced to the national finals with convincing wins Friday night.

Akron dominated Michigan State 5-1.  This one-side match had a totally unexpected margin of victory.  Akron’s high-powered attack totally overwhelmed a Spartan defense that had previously allowed an average of only 0.77 goals per game including only two in their four NCAA Tournament wins.

The contest remained scoreless until the fifteenth minute when Akron forward David Egbo sent the rebound of Morgan Hackworth’s header back into the frame to give the Zips the early lead that they never relinquished.  Michigan State had opportunities to score early in the match that might have created a different pace in the contest had they been able to finish them.  But they didn’t.  When Akron is able to gain the upper hand, they are very capable of scoring in multiples as they demonstrated Friday night.

Freshman defender Carlo Ritaccio scored in the thirty-second minute to give Akron a 2-0 advantage at intermission.  Skye Harter made it 3-0 when he clinically drove a shot into the upper right-hand corner of the frame from outside the box in the fifty-third minute.  Junior forward Marcel Zajac made a nice move off the dribble to find the angle he needed to make it 4-0 in the sixty-fifth minute.  Sophomore defender Patrick Nelson converted a header out of a corner kick for Michigan State in the seventy-ninth minute to prevent the shutout.  Redshirt freshman Braden Petno added the fifth and final Akron goal of the evening in the eighty-fifth minute of play.

Michigan State (14-5-4) is a much better team than the score indicated but for the night this one was all Akron.  The fact that this Michigan State team was able to advance to the College Cup leaves a legacy of success and experience that will benefit the program in future seasons.

In the second semifinal Friday night, the third time proved to be a charm for a Maryland side that had been on the short end of a 2-1 loss to Indiana in regular season play as well as in a match with Indiana that was decided by a penalty kick shootout in the Big Ten Tournament.

The Terps came out of the gate on the front foot displaying the trademark Maryland fifteen minutes of very high pressure.  It proved to set the pace and it was clear from the get-go that the Terps were going to bring the heat.

Indiana weathered the storm and it appeared that the momentum might switch to the Hoosiers but that was not the case.  Maryland abruptly gained the upper hand in the thirty-seventh minute of the contest when sophomore Matt Di Rosa came off the pine and scored out of a corner kick to give the Terps a 1-0 lead.  The goal gave Maryland both a physical and mental boost.

The Hoosiers had to chase from that point forward and a bend but don’t break Maryland defense anchored by backs Donavan Pines, Johannes Bergmann, Ben Di Rosa and Chase Gasper and goalkeeper Dayne St. Clair was able to keep Indiana from finding the back of the net.  Pines, who was a factor on both sides of the ball for Maryland, scored the insurance goal out of a free kick in the seventy-ninth minute of the match.

It was a heartbreaking end for an Indiana (20-3-1) team that has been outstanding all season. The Hoosiers appeared, particularly in the second half of play, to be just one pass away from breaking through on several occasions.

The landscape of college soccer can change.  One of the storylines of the evening has to be the fact that just a few weeks ago it seemed highly unlikely that Akron and Maryland would be the last two teams standing.  Regardless, both advanced to the final because they beat the best.

Maryland was 7-6-3 overall at the end of regular season play and 8-6-4 after the Big Ten Tournament. Their resurgence began during the latter part of October. The Terps have won eight out of their last ten games with one tie and one loss.

Perhaps the turnaround that both programs have experienced can be explained in part by the fact that both programs began the season with significant gaps to fill in key roles which created a learning curve.  It is also significant that despite the losses, neither team played poorly in the early going nor was there a lack of effort or talent.  The difference between winning and losing can be very small, particularly when you have a dance card that included the level of competition that both Akron and Maryland faced.

Some teams are not able to recover when they begin the season with less than impressive win-loss records.  It clearly helped that both Akron and Maryland have winning traditions, are well coached, and had talented rosters.  Adjustments were made, the newcomers settled in, the veterans set the pace, and things began to fall into place.

Soccer can be a cruel sport.  Veteran Maryland head coach Sasho Cirovski and Akron head coach Jared Embick would likely be among the first to tell you that.  Both have enjoyed a lot of success but both know that things don’t always work out as expected.

Fortunately, regardless of the outcome Sunday night, 2018 will be a season in which things have worked out well for both Akron and Maryland.  Both have overcome adversity – stayed the course – and it has paid off for them.

The contest will be carried live from Santa Barbara on ESPNU at eight pm eastern standard time.  It should be a dandy.