College Soccer Players in Contention For A Spot On The U.S. U-20 World Cup Roster 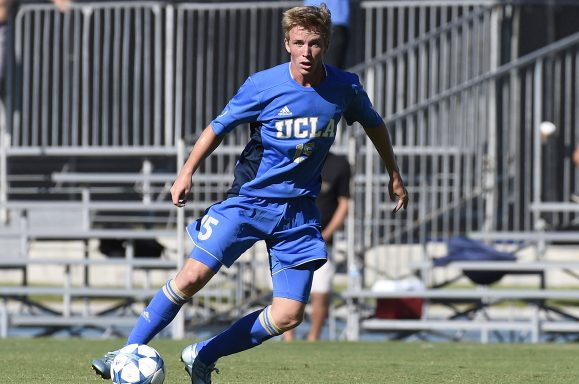 October 27, 2016 – By Ben Roth –  With the U-20 World Cup coming around this summer in South Korea, it’s never too early to start looking at roster options.  In the last world cup, Head Coach Tab Ramos only rostered two college players, both back up goalkeepers in Jeff Caldwell and Thomas Olsen, but this world cup roster looks like it will have a much larger college contingent.  More American youth talents than ever are darting to clubs oversees, but there are still a handful of talented youngsters providing their talents in college soccer.  College Soccer News takes a look at a few college soccer players eligible and in contention for a spot on the U.S. U20 World Cup roster.

Jackson Yueill (UCLA): The Bruins center mid should be in contention for a starting role for the U20s and deservedly so. Yueill (1g, 6a), a staple with the youth national teams over the years, has been one of UCLA’s most consistent players over the past two years.  He’s a two-way player with a great engine and soccer IQ, capable of playing the #10 role or as a box-to-box midfielder.  By the time the World Cup comes around, the sophomore playmaker will most likely be a professional player, whether in MLS or abroad.  At the World Cup, Yueill will be competing for minutes with the likes of current pro players Gedion Zelalem (Arsenal), Luca De La Torre (Fulham FC), Weston McKennie (Schalke 04), among others.

JT Marcinkowski (Georgetown): Marcinkowski, a 1st team College Soccer News Preseason All-American looks to be a lock to make the roster come May.  The Hoyas shot stopper’s stats aren’t as impressive this season as they were his freshman year, but that has to do more with the fact that his entire backline from 2015 graduated.  Still, the San Jose Earthquakes homegrown prospect looks to be one of the three keepers on the plane to South Korea.  Marcinkowski(53 saves) has a good frame, is excellent on crosses, and plays out of the back competently.  Expect the Georgetown netminder to compete for minutes with fellow collegiate keeper Jonathan Klinsmann (University of California) and Fortuna Dussedorf’s Justin VomSteeg.

Miles Robinson (Syracuse): Robinson (4g, 1a), a blistering fast center back, performed well enough in the Four Nations tournament to put himself into serious consideration for a spot on the roster.  The Orange defender is arguably the best defender in college soccer and likely the most athletic.  Robinson, a College Soccer News First Team All-Freshman honoree is a beast on set pieces and is versatile enough to play anywhere in the back line.  Despite his talent, he faces serious competition from professional players Cameron Carter-Vickers (Tottenham), Tommy Redding (Orlando City), and Auston Trusty (Philadelphia Union) at center back.  Robinson must continue his excellent play for a stalwart Syracuse backline to earn himself a ticket to South Korea.

Eryk Williamson (Maryland): The DC United academy product has been one of the most dynamic players in the ACC since coming to College Park.  Williamson (2g, 4a), a speedy winger has done well for the undefeated Terps thus far and will need to continue to impress to earn a spot on roster 21-man roster.  As a great 1v1 attacker, he brings a different element to Tab Ramos’ squad and will hope that makes the difference in his standing on the roster.  While a fringe player currently, Williamson benefits from the fact that there’s currently not an abundance of true wingers in the player pool.

Cameron Lindley (North Carolina):  Lindley (0g, 6a), a captain at nearly every youth national team age group will be looking to compete for a spot in the starting XI.  The smooth operating center mid brings a mix of tough and grit along with an ability to spray the ball around the park.  The Chicago Fire academy product has been arguably the best freshman in the country and will look to lead the Tar Heels to a College Cup for the first time since 2011.  Lindley, the number 1 player in College Soccer News’ 2016 class, could be signed as a Homegrown player this offseason, but regardless expect to see him in South Korea this summer.

Jonathan Klinsmann (University of California): The Golden Bears keeper is a lock to make the roster and will be battling with Marcinkowski for the #1 role.  Klinsmann, a commanding presence in the back has matured tremendously since his introduction to the U.S. Youth System.  He’s confident with his feet and likes to build out of the back, which is a plus in Ramos’ system.  The California-native has done well for a young Cal team that’s at times susceptible in the back.  Regardless of how the rest of the season goes for them, Klinsmann will be on the flight to South Korea, it’s just a question of whether he’ll be starting come May.

Marcello Borges (Michigan): The Wolverines defender and New York Red Bulls academy product is the starting left back for the U20s at this point.  Borges (0g, 2a), a favorite of both U19 Head Coach Brad Friedel and current U20 Ramos, is as solid as a contributor that you’re going to see at this level.  He’s a tough defender, both in 1v1 battles and defending combinations, and picks his moments to join the attack well.  Borges performed well with the U20s in the Four Nations tournament earlier this month and will look to continue to make a positive impact for an inconsistent Michigan side this season.  The defender from Soccer Town, USA should be a lock to make the roster and without much competition currently at left back, a starter for the U20s.

Tommy McCabe (Notre Dame): McCabe, a defensive midfielder for the Irish is an underdog to make the roster, but should receive a look from Ramos and his staff.  The Player’s Development Academy (PDA) product was a key piece for the U.S. U17s in the 2015 World Cup after two years in the Residency Program in Florida.  While the U20s will primarily be made up of players born in 1997, McCabe a 98’, adds a tactical acumen at the #6 position that they may lack.  There isn’t significant depth at this position for the U20s and McCabe, a freshman, has performed admirably for a veteran Notre Dame side.  While McCabe hasn’t been called into U20 camps yet, if he continues to perform at this level, don’t be surprised to see him play his way onto the World Cup roster.

Elijah Rice (Washington): Rice (3g, 1a) has fallen out of favor a bit within the youth national system, but he brings a different element at the center forward position.  The natural goal scorer for Real Salt Lake’s residency program led all of Development Academy last year notching 18 goals in 15 games.  Rice has done well as a presence off the bench for the Huskies as his relentless work rate puts teams under pressure as the game wears on.  Currently, he’s on the outside looking in, but the athletic #9 could be a change of pace for U20s and definitely deserves a look.

Ben Roth is a contributing writer and analyst for College Soccer News. He can be reached at Ben.rothpda16@gmail.com