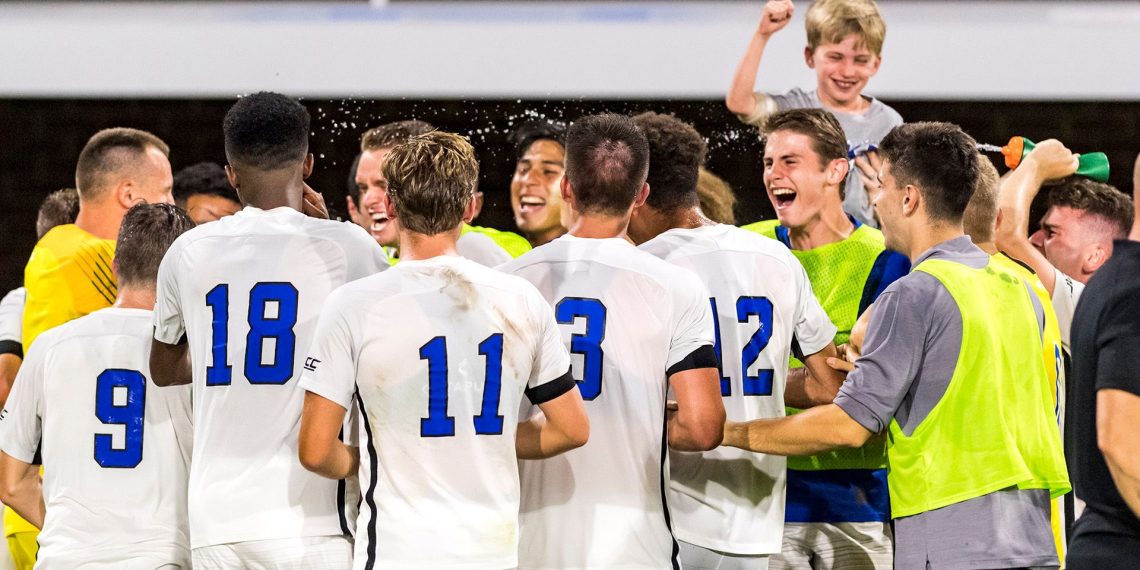 The margin for error is slim. Several upsets have occurred this week when teams were unable to put together a full ninety minutes of play. The action heats up coast to coast with several huge contests on tap Saturday and Sunday. .

Duke 3 – North Carolina 2 – The Blue Devils secure their first win over the Tar Heels in Chapel Hill since 1999.  UNC jumped out to what appeared to be a commanding 2-0 lead with Alex Rose scoring in the eighteenth minute and Jelani Pieters in the twenty-sixth minute. Duke kept their composure and the momentum changed with Daniel Wright scoring in the twenty-seventh minute, Brandon Williamson in the fifty-eighth, and Scotty Taylor in the sixty-third to shock the Tar Heels.  Will Pulisic had four saves in goal for Duke. Alec Smir had two saves in goal for North Carolina. Duke gets back into the win column after three consecutive losses to improve to 5-3-0 while a talented but inconsistent UNC team drops to 4-2-2.

Charlotte 4 – South Carolina 0 – The 49ers controlled this one on both sides of the ball.  Joe Brito and Luke Johnson scored in the first half of play for Charlotte while Axel Sigurdarson and Owen Peeler found the back of the net in the second stanza.  Charlotte has now scored three goals in three straight matches and have outscored their opponents 17-5 while posting a 6-0-2 record. South Carolina is 4-4-0 on the season.  Elliot Panicco had a one save evening between the pipes for the 49ers. Buenyamin Yusufogiu had three saves in goal for the Gamecocks.

UCF 2 – Temple 0  – The Knights claim their fifth straight win with midfielder Yoni Sorokin converting a header out of a corner kick served in by midfielder Louis Perez in the third minute and forward Jonas Schmalbach netting the second goal in the seventy-seventh minute with an assist from Perez. UCF improves to 6-1-1. Temple is now 2-5-0.

North Carolina State 2 – Louisville 1 – The Wolfpack showed a lot of grit and maturity with a 2-1 on the road win over Louisville in this ACC contest. Sophomore Iverson Brisma made the run he needed to make to be in position to drive a shot into the far post  out of a breakaway in the fortieth minute of the match and senior Tyler Gabarra sent a left-footed shot into the back of the frame from seventeen yards out after creating a turnover to give NC State a 2-0 advantage at intermission. Forward Emil Elveroth scored the lone goal for the Cardinals in the eighty-fourth minute with a double assist from Cherif Dieye and Will Hirschman.  Vinnie Durand had two saves in goal for the Wolfpack. Jake Gelnovatch had three saves between the pipes for Louisville.  NC State improves to 5-2-1 while an up and down Louisville squad that topped Georgetown 1-0 earlier in the week is now 4-2-2.

New Hampshire 2 – Binghamton 0 – The Wildcats continue to take care of business securing a win in their America East Conference opener behind first half goals from senior Antonio Colacci with an assist from Jack Doherty and freshman Rory O’Driscoll with Colacci providing the helper. Alejandro Robles had three saves in goal to post the shutout for New Hampshire. Mats Roorda and P.J. Parker split time between the pipes for Binghamton with each posting two saves.  The Wildcats improve to 7-0-2. The Bearcats drop to 2-5-1.

Maryland 0 – Wisconsin 0 (ot) – This one took place in at the McClimon Soccer Complex in Madison after the start was delayed due to rain. The Terps pressed the attack in the first half with a twelve to three advantage in shots. The Terps were hampered when they had to play a man down due to a red card in the fortieth minute. Wisconsin had an eleven to five shot advantage in the second stanza.  Freshman Niklas Neumann had five saves in goal for the Terps.  Senior Dean Cowdroy had nine saves in goal for Wisconsin. Maryland is 4-3-1. Wisconsin is 2-6-1. Both teams are 0-1-1 in Big Ten play.

Michigan 0 – Penn State 0 (ot) – Both teams attacked in this contest which had ebbs and flows during which the momentum appeared to change but at the end of the day defense ruled with neither team able to find the back of the net during 110 minutes of play. Michigan had a ten to eight advantage in shots and a seven to two advantage in shots on goal.  Josh Levine had a seven-goal outing for Penn State. Andrew Verdi had two saves in goal for Michigan. Penn State was presented a red card in the ninety-fourth minute and played with ten during the two overtime periods. Michigan is 3-2-3 overall with a 0-0-2 mark in Big Ten play.  Penn State is 4-1-2 overall with a 1-0-1 record against Big Ten opponents.

San Diego 1 – UC Riverside 0 – San Diego picks up a solid on the road non-conference win. Neither team was able to get into a rhythm on the offensive side of the ball during the first half of play. Forward Miguel Berry’s goal in the forty-ninth minute with an assist from midfielder Freddy Polzer proved to be the difference maker in this something has to give contest between two teams that have had a promising start to the 2019 season. San Diego improves to 7-1-0 while UC Riverside is now 5-2-2.

Marquette 2- Xavier 1 – Marquette comes from behind on the road in this Big East Conference contests between two teams who went into this one seeking to gain momentum.  Xavier looked to be in the driver’s seat when sophomore defender Taylor Crull sent a deflection out of a throw in back into the frame in the sixtieth minute of play to give Xavier a 1-0 advantage. But Marquette responded five minutes later when forward Josh Coan made a nice move to create the space he needed to find the back of the net after receiving a long ball from A.J. Franklin. Christian Marquez then netted the game-winner for Marquette in the seventy-seventh minute after receiving a cross from defender Alex Mirsberger.   Marquette improves to 4-3-1.  Xavier is also 4-3-0.

Marshall 4 – Old Dominion 1 – The Thundering Herd under the direction of head coach Chris Grassie looked good in a 4-1 Conference USA win over ODU. Forward Milo Yosef scored out of a give-and-go in the first minute of play and forward Joao Souza made it 2-0 when he scored in the fifteenth minute with an assist from Jamil Roberts.  ODU made it interesting when midfielder Sebastien Hauret scored in the eightieth minute to make it 2-1 but Marshall took control with Yosef and forward Vitor Dais contributing goals a few minutes later to seal the win for the Thundering Herd. Marshall makes their presence known with a 6-1-1 overall record and a 2-0-0 mark in CUSA play. ODU continues to struggle with a 1-5-1 record and a 0-2-1 mark in conference play.

CSUN 2 – Omaha 1 (ot) – CSUN grinds out a hard-fought win on the road. Omaha drew first blood when Aaron Uribe converted a penalty kick in the seventh minute of the match. Defense ruled from that point forward and the teams went into halftime with Omaha up 1-0.  Daniel Trejo scored in the seventy-seventh minute after receiving a pass from Alex Lara to knot the score at 1-1. The contest remained 1-1  at the end of regulation. Johnny Rodriguez netted the game-winner for CSUN in the first overtime period with a double assist from John Andersen and Julio Rubio. CSUN improves to 5-3-1. Omaha drops to 1-5-2.

Mercer 3 – Georgia Southern 2 – Mercer jumped out to a 1-0 lead when midfielder Dylan Gaither scored in the eighteenth minute.  Forward Trevor Martineau extended the lead to 2-0 when he found the back of the net in the twentieth minute. The score remained 2-0 at halftime. Georgia Southern came out strong in the second half with defender Aldair Cortez and forward Adam Davie contributing goals to tie the contest at 2-2.  Redshirt junior forward Leonard Toledo Junior scored the game-winner for Mercer in the eighty-second minute. Mercer improves to 6-2-0. Georgia Southern is 4-4-0.

Santa Clara 2 – Lipscomb 0 – This one took place in Nashville. Alan Comacho Soto sent a left-footed shot into the net out of a corner kick in the thirty-second minute of the match and Isaac Addai added another goal in the seventy-eighth minute from the top of the box to give visiting Santa Clara the edge they needed to top Lipscomb.  Santa Clara improves to 4-3-1. Lipscomb is now 2-4-1.