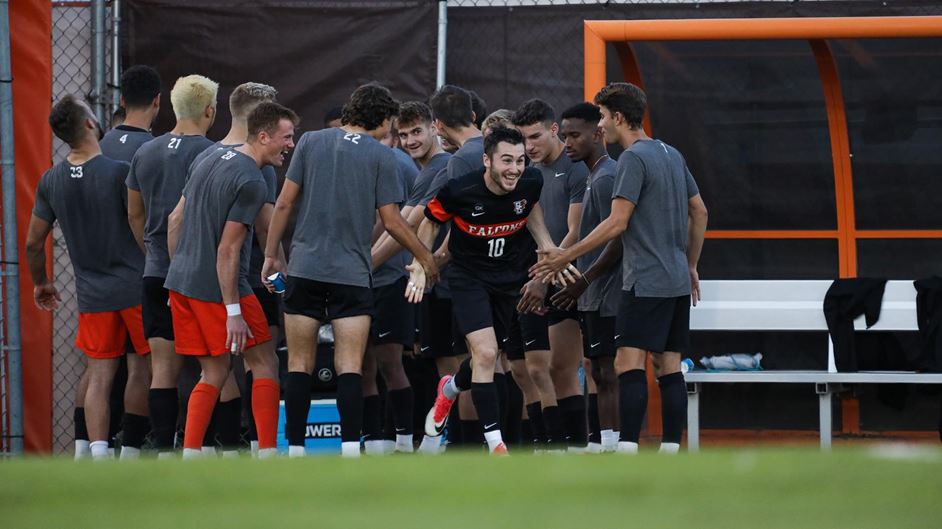 Falcons Have Big Shoes To Fill Due To The Departure Of Defender Jacob Erlandson And Midfielder Zach Buescher But Eric Nichols Will Have Plenty Of Experienced Talent To Work With.

Jacob Erlandson – Defender – A two-year starter at center back and All-MAC First Team selection after transferring in from Huntington University. A 2021 team captain. Erlandson was selected by the Columbus Crew in the 2022 MLS SuperDraft. A United Soccer Coaches 2021 All-North Region First-Team selection. Had nine goals and six assist during two seasons.

Roberto Fernandez Garrido – Forward – Played in 19 contests in 2021 season with one start. Had six goals and one assist. Played in six games in 2020 season (spring 2021) with one assist. Prior to that he played for Millian College for two seasons during which he scored 38 goals and had five assists.

Consistency and focus on defense. Bowling Green was solid on the defensive side of the ball for most of the season but they allowed five goals in a 5-1 loss to Akron and a 5-2 loss to Northern Illinois. In the loss to Akron the Falcons came out flat and allowed the Zips to dominate play in the first half. Against NIU they allowed the Huskies to score three times in a five minute span early in the second half.

Eric Nichols stated, “This is really an exciting class. Each of these guys possesses the character, skill and athleticism to excel in college soccer and beyond.” He added, “Ultimately, these guys chose Bowling Green because competing is in their DNA and they want to compete for championships.”

The 2022 season will the the third in a row that the duo of senior Nathan Masters (3g, 5a) and junior Kyle Cusimano have worked together up-top for Bowling Green. Masters, a three-year starter, and Cusimano, a two year-starter, give the Falcons a formidable presence up-top and add a level of consistency and cohesiveness to the attack that is not easy to come by.

Senior Abdi Faqi (1g, 0a) is among other returning players who figures to be in the mix up-top. True freshman forward Ryan Sanborn is among the members of the 2022 recruiting class has the physicality and speed to make an immediate impact and to add another dimension to the attack.

The departure of midfielder Zach Buescher, a four-year starter and multi-year All-MAC selection, creates a void that will not be easy to replace. However, the Falcon midfield looks to be a team strength in 2022.

Sophomore midfielder Alberto Anaya (5g, 4a), the 2021 MAC Freshman of the Year and a College Soccer News All-Freshman Team selection, returns to add another explosive element to the offense. Fifth-year seniors Jensen Lukacsko (0g, 3a) and Sergi Martinez (3g, 6a) also return to set the pace in the center of the park. Both are very talented and experienced playmakers and tireless workers who will create havoc for opponents. Senior Kale Nichols (3g, 2a), a solid three-year starter, rounds out what looks to be a very competitive BGSU midfield. Sophomores Jake Bergin who appeared in six contests last year and Gaetano D’Argento who appeared in nine are among other returning players who will seek to play a greater role in 2022.

Bowling Green must overcome some losses on the defensive side of the ball. Jacob Erlandson, a two-year starter and All-MAC First Team selection, was a stalwart in the back and was also the Falcons top goal scorer last year. In other words, Erlandson is the type of player not easily replaced.

Senior back Michael Montemurri (2g, 1a), a three-year starter who led the Falcons in minutes played in 2021, was among the returning players who BGSU would depend on to play a key role in 2022 but an injury sustained during the spring season may keep him out of the lineup for a portion of the 2022 season. On the plus side of the ledger, junior Joey Akpunonu (2g, 2a), a two-year starter and 2021 All-MAC Second Team selection, is slated to return to anchor the backline and to help fill the leadership void that the loss of Erlandson creates.

Seniors Carter Womack who played in 12 games last year and Josh Erlandson who appeared in six look to be among other returning backs who will be in the hunt for a greater role in 2022. Amer Dedic, a 6’4″ center back from Germany, is among the members of the recruiting class who could make an immediate impact.

Goalkeeper Logan Kowalczyk who started the first 14 games of the 2021 season before sustaining a shoulder injury returns between the pipes along with Brendan Graves who assumed the starting role for the remainder of the season. Both are solid shot stoppers who will battle for the staring job.

Bowling Green is coming off a 2021 season during which they were 11-6-3 with a 2-2-2 mark in MAC play. The Falcons were one of five MAC teams that were awarded a berth in the NCAA Tournament (Northern Illinois, Akron, Bowling Green, West Virginia and Georgia State). They subsequently advanced past Louisville 1-0 to claim the program’s first win in the NCAA Tournament since 1997 before their season ended with a 2-0 loss in the second round to Indiana. The Falcons ended the 2021 season as the number 30 team in the country in the College Soccer News National Poll.

The MAC has added Chicago State as an affiliate member in men’s soccer in 2022 but will be without West Virginia, Georgia State and Georgia Southern who moved to the Sun Belt Conference. There is no clear cut favorite in the five member MAC heading into the 2022 season, so why not BGSU.

Bowling Green will enter the 2022 season with the momentum and the confidence that accompanies back-to-back appearances in the NCAA Tournament. The success the program has enjoyed has resulted in loftier expectations which in turn has led to a robust 2022 slate of non-conference opponents. A challenging early season non-conference slate provides the opportunity to secure several early season signature wins. It also means that the potential exists for Bowling Green to have a difficult month of September from a win-loss perspective if they don’t settle in and mature quickly as a team particularly on the defensive side of the ball.

Team chemistry will not be an issue at Bowling Green in 2022 with so many returning players including 5th year seniors Jensen Lukacsko and Sergi Martinez who will at the heart of the action as attacking midfielders. Kyle Cusimano and Nate Masters provide an experienced and coordinated presence up-top and sophomore Alberto Anaya will add another dimension to what looks to be a very good midfield. Junior back Joey Akpunonu is well positioned to play a greater role in the back and the return of a healthy senior Logan Kowalczyk in goal along with junior Brendan Graves will add stability to the defense.

Depth could be an issue as the season progresses particularly on defense but that could be mitigated by the emergence of several returning players who saw limited action last year and the ability of several of the newcomers to make a contribution.

There is a lot to like about the culture that exists at Bowling Green under Eric Nichols and the progress the program has made. The door is open in 2022 for Bowling Green to continue to build on the success they have had the last two seasons, but making that a reality will require another meaningful step forward in both productivity and consistency.