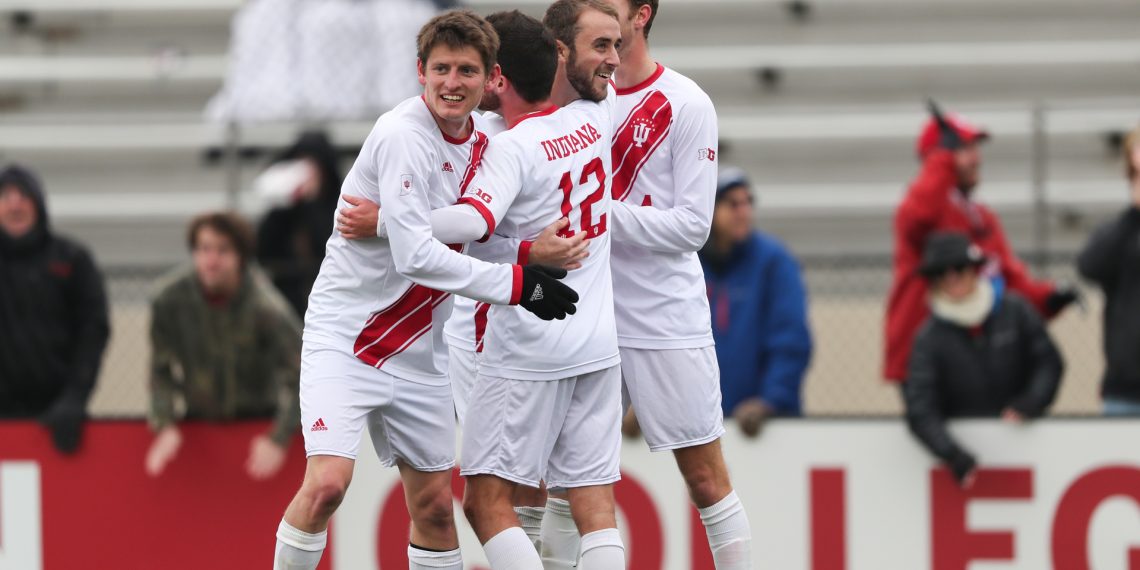 Six more teams punched their ticket to the Elite Eight on Sunday joining Kentucky and Maryland. The contests this weekend will determine who advances to the coveted College Cup (Final Four) in Santa Barbara.

Akron 1 – Wake Forest 0 – Junior forward Marcel Zajac recorded the lone goal of the evening in the forty-sixth minute of play with a double assist from forward David Egbo and defender Abdi Mohamed.

Defense ruled in this one as is so often is the case when two offense-oriented teams face each other at this stage of the season.  An Akron defense anchored by a stellar performance between the pipes by senior Ben Lundt along with backs Mohamed, Pol Hernandez, Marco Milanese, and Carlo Ritaccio  stymied a potent Wake Forest attack that came into the match averaging 2.48 goals per game.  Lundt had a brilliant five save evening including several stops at point blank range.

Wake Forest head coach Bobby Muuss stated, “They stuck together and bent a lot but did not break.  I thought it was one of the best second-half performances that we’ve had this season in a dominant fashion.  This is a game of mistakes in a lot of ways and we made a couple defensively and leaked a goal.”

It was a heartbreaking loss for a Demon Deacon team that was ranked as the number one team in the country for a large portion of the 2018 season. Wake Forest concludes another highly successful year with a 18-3-0 record.

An Akron team that struggled during the early part of the season continues to gain momentum with stellar play on both sides of the ball.  The Zips have now won seven in a row to improve to 13-6-2.  They now advance to the Elite Eight for the second season in a row where they travel to tangle with defending national champion Stanford.

This one played out according to script.  Saint Mary’s was the more aggressive of the two sides finishing the evening with a twenty-one to eight advantage in shots with eleven on goal as compared to two for Stanford.

Stanford goalkeeper Andrew Thomas was the man of the match for the Cardinal making the big saves that he needed to make to keep a very potent Saint Mary’s attack at bay.  Thomas had an impressive eleven save evening during which Saint Mary’s threw everything but the kitchen sink at him in an effort to secure what they hoped would be a game-winning goal.  Thomas also had two crucial stops in the penalty kick shootout.  Jeremy Gunn accurately summed it up when he stated, “Andrew kept us in the game today with some amazing saves.”

Saint Mary’s junior netminder Remi Prieur, who had a two save evening, also made the saves during regulation and overtime that he needed to make to keep his team in contention for the win.

The Gaels close out an amazing season with an 18-0-2 record during which they secured a new program best for number of wins and captured national attention with an attack powered by Jake Rudel (13g, 5a), Anders Engebretsen (9g, 6a) and Stephen Dougherty (6g, 4a) that produced a total of fifty goals and a tenacious defense that allowed a total of only eight goals.

Stanford improves to 12-3-5 and advances to the Elite Eight where they will host a red hot Akron team that upset Wake Forest in Winston Salem 1-0.

James Madison 3 – Virginia Tech 0 – James Madison got the upper hand in this one early on and never really relinquished it.  The Dukes scored on an own goal in the seventeenth minute, redshirt sophomore midfielder Carson Jeffris made it 2-0 in the fiftieth minute after making a nice move that opened up the net for him, and graduate student Yannick Franz added the final score of the evening out of a free-kick from just outside the box in the fifty-eighth minute.

JMU’s offensive productivity was particularly impressive since they played the contest without the services of leading scorer midfielder Manuel Ferriol who had to sit out after being awarded a red card in the closing minutes of JMU’s second round contest with North Carolina.

This one came down to the fact that James Madison did a good job of creating and finishing scoring opportunities while not making any mistakes on the defensive side of the ball.  Virginia Tech on the other hand had several miscues on the defensive side of the ball that put them in the position of chasing the game and hampered their ability to get into any type of rhythm.

James Madison head coach Paul Zazenski stated, “It was an amazing result for us to be able to advance to the Elite Eight.  We had our mindset all year to defend first and that’s what we did. TJ and the backline played phenomenally and we put in three goals.  I couldn’t be prouder of this group and the senior leadership from our guys to grind this out.”

A very determined, balanced, and focused JMU team improves to 15-4-3 and advances to the Elite Eight for the first time since 1995.  The Dukes will seek to win their fourth consecutive contest on the road when they travel to East Lansing to face Michigan State.

Virginia Tech concludes another successful season with a 11-7-3 overall record and the knowledge that a lot of their players will be back next year.

Michigan State 1 – Georgetown 0 – As expected this one was decided by a single goal.  Michigan State earned back-to-back appearances in the Elite Eight when sophomore midfielder Michael Miller converted the lone goal of the contest in the final minute of the first half.  Miller’s game-winning goal was a rocket into the lower right corner of the net from outside the box after receiving a pass from defender Michael Pimlott.  The goal was Miller’s first of the year.

Damon Rensing stated, “Sometimes in these games you need a player to step up. Obviously, Michael Miller made a huge play on a great goal. This was just a total team effort, and that has been the story for us so far. We are getting goals from midfielders, forwards and defenders.”

Hoyas head coach Brian Wiese pretty accurately summed things up when he stated, “Against Michigan State, the first goal is really important and credit them they make it hard after that. One goal was maybe what the game was going to be about today and it was unfortunate that we came out of the wrong side.”

Georgetown concludes a very productive 2018 season with a 13-5-3 overall record.  Michigan State improves to 13-4-4 and will host James Madison University in the Elite Eight.

Notre Dame 1 – Virginia 0 – The chances that a single goal would win this one or that it would come down to a penalty kick shootout were pretty good.  A shootout seemed the likely outcome when the teams were scoreless at the conclusion of regulation with both sides cautiously attacking.

A decision via a shootout was avoided when Irish freshman forward Jack Lynn athletically and decisively headed a cross into the near post with a second remaining in the first overtime period.  The goal was set up by a nice cross from Tommy McCabe.

The Notre Dame defense anchored in goal by Turnbull and a backline of Patrick Berneski, Sean Dedrick, Felicien Dumas, and Senan Farrelly have posted a total of nine shutouts and have held their opponents to one or no goals in sixteen of twenty contests.

This game could have gone either way with the difference being that Notre Dame was able to come up with the one big play needed to secure the win.

Virginia closes out another successful season with a 10-4-3 record.  Notre Dame improves to 11-6-3 under first year head coach Chad Riley and advances to the Elite Eight where they will meet Indiana in Bloomington.

Indiana 2 – Air Force 0 – The Hoosiers continue to grind out the wins in their quest for the national championship.  All the scoring in this one took place in the first twenty-two minutes of play.  IU came out firing and took a 1-0 lead in the sixth minute of play with Austin Panchot contributing the goal with a double helper from Trevor Swartz and Timmy Mehl.  Mehl added the insurance goal with a header in the twenty-second minute from almost point-blank range.  The goal was set up by a cross from Swartz who picked up assist number fifteen season to date.

Air Force seemed to settle in on the defensive side of the ball but they had dug themselves into a 2-0 hole that they could not dig out of.  The Falcons tried to press the attack but the IU backline of Mehl, Jack Maher, Andrew Gutman and Rece Buckmaster along with sophomore goalkeeper Trey Muse did a good job of shutting down a high-powered Air Force offense.

Air Force concludes a very good season in which they secured a program high seventeen wins with a 17-5-0 record.

Indiana improves to 19-2-1 and marches forward to the Elite Eight where they will host Notre Dame.