A Look At Three Of The Many Players Who Have Utilized College Soccer As A Springboard To The Professional Ranks. 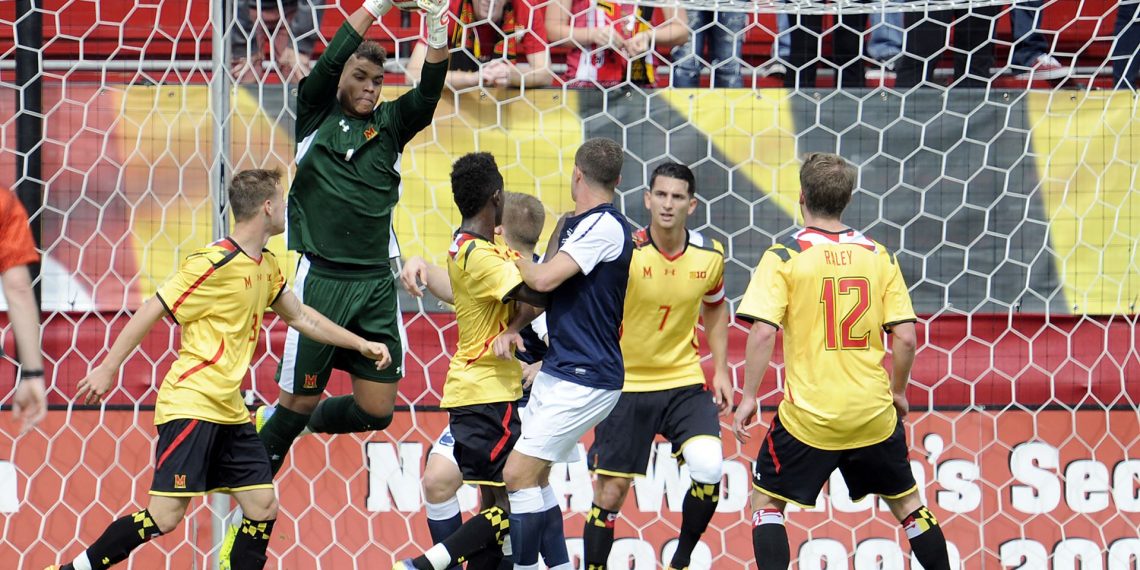 The Path That Three Former College Players Followed To A Successful Professional Career. By Brian Ludden

College – During his freshman year, Larin led UConn with 14 goals, which was the sixth highest in the nation during the 2013 season. After an impressive freshman season in which he was named the 2013 AAC Freshman of the Year, Larin was considered by many to be one of the best players available in the upcoming MLS SuperDraft. However, Larin elected to return to Connecticut for another season.

In his sophomore season in 2014, Larin scored nine goals and added three assists for the Huskies, and was an All-AAC First Team selection. Larin was expected to be the number one overall pick in the 2015 MLS SuperDraft, if he signed with the league, as it was rumored that there were European clubs interested in him.

Orlando City – Despite gaining interest from European clubs, including an English Premier League club, Larin signed a Generation Adidas contract with MLS. As many people expected, expansion club Orlando City SC, made him the first ever Canadian chosen first overall in the MLS SuperDraft.

Larin scored his first goal for Orlando in a 2-0 win vs. the Portland Timbers. Larin also recorded his first hat trick at the professional level in a match with NYCFC. By doing this, he became just the third Canadian to score three goals in an MLS match. Larin was named the 2015 MLS Rookie of the Year after scoring 17 goals in 27 games.

In 2016, Larin once again led Orlando City in goals with 14 goals in 32 matches. This impressive season earned Larin an MLS All-Star game selection, where he came on as a substitute vs. Arsenal.

In his third season with Orlando City, Larin once again was the team leader in goals finding the back of the net 12 times in 18 contests. After the season, Larin expressed that he always had dreams of playing in Europe, and stated, “I think I’m at the right place to go play in Europe and it’s the right time.”

Besiktas – Larin was sold to Besiktas in January 2018, for an undisclosed fee. He scored in his debut for Besiktas and added a hat-trick on the final day of the 2017/2018 season. In the second qualifying round of the 2018/2019 Europa League, Larin scored another hat-trick for Besiktas in a 6-0 win over B36 Torshavn.

Larin was loaned out to Belgian side Zulte Waregem for the the 2019/2020 season, and scored nine goals in 33 total appearances, including each of their domestic league matches.

During the 2020/2021 season, Larin has the most goals on the season, with 18 goals in 34 appearances across all competitions (as of March 25), including a four-goal performance vs. Rizespor. He was especially impressive in last October-mid November, where he scored in four straight matches for Besiktas. Larin is the only player on the team who has scored in three different competitions, as he scored the lone goal for Besiktas in the Champions League qualification loss against Greek side PAOK.

As one of their most lethal scorers, Larin figures to be an important part of this Besiktas side if they want to make a run at a Turkish Super Lig title.

Canada – Larin has featured many times for the Canadian Men’s National Team, as he has earned 31 caps, scoring eight goals in the process. Larin scored his first goal for Canada in a 3-0 win over Puerto Rico in 2015.

Future Outlook – After a very successful collegiate career at Connecticut, Cyle Larin has gone on to have a successful pro career, both for his clubs and for his national team. Larin figures to be an important piece for any team that he plays for in the future.

College – Playing at the University of Maryland, Steffen became the Terps starting goalkeeper from the first game of the season. He played every minute of the 2013 and 2014 seasons between the pipes for Maryland.

During his freshman season, Steffen recorded eight clean sheets and was named the Most Outstanding Defensive Player in the 2013 NCAA College Cup during which Maryland advanced to the title game.

As a sophomore at Maryland, Steffen was named the Most Valuable Defensive Player of the 2014 Big Ten Tournament. He recorded nine clean sheets and made six saves in the Big Ten Championship game, a 2-1 win for Indiana.

SC Freiburg – Rather than entering the MLS SuperDraft, Steffen opted to go overseas and signed a contract with German side SC Freiburg midway through the 2014-2015 season. He was assigned to the club’s reserve team, SC Freiburg II. However, Steffen did not make his debut until the following season, where he kept a clean sheet vs. 1. FC Saarbrucken. He made 14 appearances throughout the season for SC Freiburg II.

Columbus Crew SC – Steffen returned to the United States in the summer of 2016, signing with MLS side Columbus Crew. Steffen was loaned to the Pittsburgh Riverhounds in August, and made nine appearances for Pittsburgh in the USL Championship.

Before the 2017 season, Steffen prevailed over Brad Stuver and Logan Ketterer to earn the starting keeper job for Columbus. He started the season opener and never looked back, starting all 34 regular-season games for Columbus in the 2017 season. In the first round of the playoffs, Steffen made eight saves vs. Atlanta United, and then stopped two more shots in the penalty kick shootout as Columbus advanced to the next round, where they would be eliminated by Toronto FC.

Despite suffering a knee injury in 2018, Steffen still made 32 appearances for Columbus. From April 28 to June 13, he recorded five consecutive shutouts and set a franchise record with 512 straight minutes without allowing a gola. Following the season, Steffan was named the MLS Goalkeeper of the Year, and was also part of the MLS Best XI.

During the summer of 2018, EFL Championship club Bristol City offered $3.9 million for Steffen, but the Crew turned down the offer. However, a 7 million offer came in from defending Premier League champions Manchester City, and Columbus accepted the offer. Steffen stayed with Columbus for the first part of the 2019 season, and made 13 appearances. In total, he tallied 26 clean sheets in 84 appearances for Columbus.

Fortuna Dusseldorf (loan) – Ahead of the 2010-2020 season, Steffen was loaned out to German Bundesliga side Fortuna Dusseldorf. He started Dusseldorf’s first 17 matches, but suffered an injury that kept him out through the winter break. Steffan had more time to recover due to the COVID-19 pandemic, but suffered a knee injury that ended his season. There were talks about extending the loan, but Dusseldorf were relegated and Steffen returned to Man City.

Manchester City – Entering the 2020-2021 season, Steffen had established himself as a Pep Gueardiola’s second choice keeper behind Man City’s number one, Ederson. However, Steffen has started in four different competitions for City, and made his first start in the EFL Cup third round against Bournemouth. Steffen stared Man City’s final Champions League group stage match vs. Marseille, keeping a clean sheet in City’s 3-0 win. After Ederson tested positive for COVID-19, Steffen started his first Premier League match, which resulted in a 2-1 win for Man City. Since the beginning of the season, Steffen has started nine games for Manchester, and led them to the EFL Cup final and the FA Cup quarter finals.

United States – Steffen was the starting keeper for the United States in the 2015 CONCACAF U-20 Championships and 2015 FIFA U-20 World Cup. He helped the U.S. pull off an upset over Columbia in the round of 16.

Steffen made his first senior team start for the United States in January 2018 in a friendly vs. Bosnia and Herzegovina, coming on as a sub for Bill Hamid. Since then, he has made 19 appearances for the USMNT, recording seven shutouts in the process.

Future Outlook – Despite being Ederson’s understudy at Man City. Steffen is learning from one of the Premier League’s top goalkeepers. While it is unknown when Steffen will break through at Manchester, he will surely be an essential part of the USMNT in their upcoming competitions for many years to come.

College – Despite starting his college career on the bench, Dike quickly worked his way into the starting lineup at the University of Virginia. Dike made his debut for the Cavaliers against FIU in September 2018, and he scored his first goal for Virginia less than a month later in a 2-1 win over Wright State. He scored four more goals on the season, before suffering an injury in the ACC Tournament. However, he was able to recover quickly and was back on the field for the Cavaliers in the 2018 NCAA Tournament. He finished the season with five goals in 13 appearances, and was named to the ACC All-Freshman team.

As a sophomore in 2019, Dike was an essential part of Virginia’s team, starting all 23 games on the season. He led the Cavaliers with ten goals on the season and eight assists. Dike scored twice in Virginia’s 2-0 win over Wake Forest in the College Cup semifinals, propelling the Cavaliers to the national championship contest. Against Georgetown in the College Cup final, Dike scored the tying goal with less than five minutes remaining in regulation to sent the game into extra time. Georgetown eventually prevailed in a contest that was determined by a penalty kick shootout.

Orlando City – Following his sophomore season, Dike signed a Generation Adidas contract, and was drafted fifth overall by Orlando City SC. He made his debut in the 2020 MLS is Back Tournament to mark the league’s return to action after being suspended as a result of the COVID-19 pandemic, coming on as a 75th minute substitute in the round of 16. Dike made his first start on August 22, and scored his first goal in a loss to inter Miami. He went on to score two goals in a win over Nashville SC just four days later. In total, Dike made 17 appearances for Orlando City, scoring eight goals.

Barnsley (loan) – On February 1, 2021, Dike joined EFL Championship side Barnsley on a short -term loan until the end of the season with the option to make the deal permanent. He made his debut in the FA Cup fifth round vs. Chelsea, coming on as a sub. Dike’s first start came three days later, when he was part of Barnsley’s first 11 in their league match vs. Brentford. On February 24, Dike scored his first goal with Barnsley in their 2-0 win over Stoke City.

Future Outlook – With Barnsley currently being in great form and sitting in the promotion playoff spots, Dike could end up being an essential part of Barnsley if they want to win promotion to the Premier League. While it seems likely that Dike will return to Orlando City after his loan, he will definitely be an exciting player to watch for many years to come, whether that is with Orlando, Barnsley, or some other team.