A Look At Several Of The Key Men’s College Soccer Contests On Tap This Weekend. The Margin For Error Is Small And A Lot is At STake. 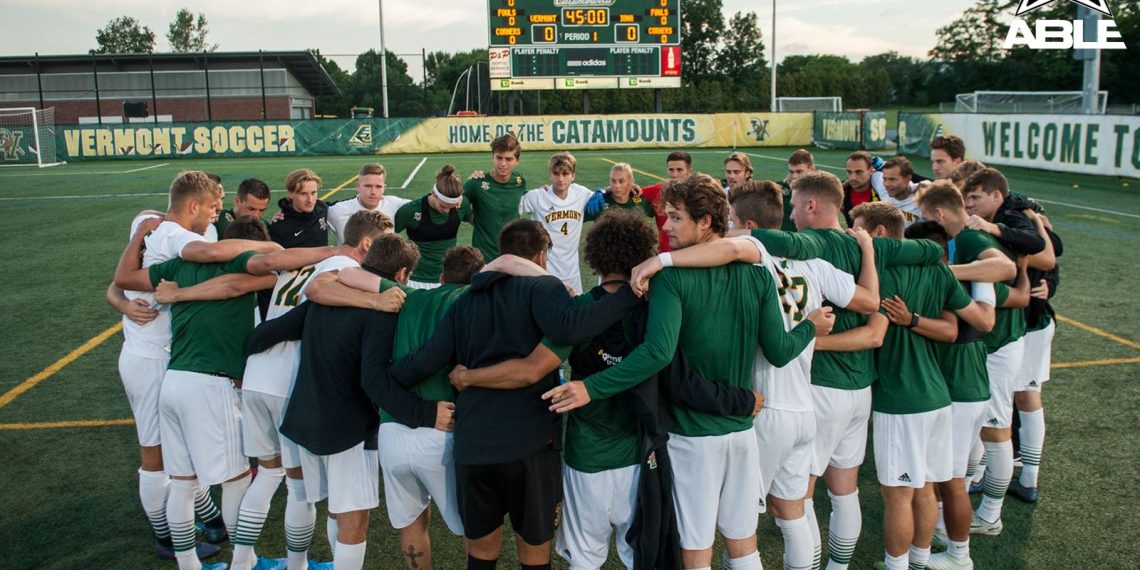 UNCW (5-1-2) vs. James Madison – Friday, April 9 – This Colonial Athletic Association match is among the “something has to give” marquee contests of the weekend.

UNCW began the spring season with a strong 3-2 win on the road over Charlotte, a scoreless tie over Duke in Durham, and a 2-0 win over a highly regarded Campbell team that rocketed them upward in the rankings. This is a good UNCW team with a balanced attack that consists of nine different players who have scored so far in the spring season. However, a scoreless tie with the College of Charleston and a 2-1 loss to Coastal Carolina makes this a must win contest for the Seahawks in terms of national standing.

James Madison lacks the explosive attack that midfielder Manuel Ferriol provided during the 2017, 2018 and 2019 seasons but their defense anchored in goal by redshirt senior goalkeeper TJ Bush is rock solid.

This contest between the two top teams in the CAA looks to be a very good college soccer match.

North Carolina (6-4-3) vs. Duke (4-9-3) – Friday, April 9 – North Carolina needs a win in this contest against rival Duke and a Pitt loss to Virginia in order to claim the regular season Coastal Division title. The winner of the Coastal Division title will face Atlantic Division winner Clemson in the ACC conference final. The winner of the conference final will receive the ACC’s automatic berth in the NCAA tournament.

The Tar Heels are coming off a 1-0 loss at home to Virginia Tech in which they had a 13-3 advantage in shots but were unable to finish.

Duke is coming off a 3-1 win on the road over Virginia and a scoreless tie on the road with NC State. Duke is better than their record indicates but like UNC has had trouble at times getting their attack into a rhythm.

On a given night both of these teams are capable of beating anyone so it just depends on which team has that given night.

These two teams played to a scoreless tie when they met on March 12 in Durham, New Hampshire. New Hampshire got the best of the run of play and had a 14-9 advantage in shots but a bend but don’t break Vermont defense that included a huge stop of a penalty kick by Vermont goalie Nathan Silveira held the Wildcats at bay.

New Hampshire comes into the contest with impressive wins over Hartford 4-0 in which forward Paul Meyer scored twice and UMass Lowell 4-1 in which midfielder Linus Fallberg scored twice.

Vermont has won four in a row during which they scored six times and allowed only one goal. Junior defender Evan Rouleau is responsible for two for the Catamounts four goals to date.  Vermont is not explosive on the offensive side of the ball but they are extremely tenacious on the defensive side.

This contest between the preseason number one and two teams in the conference could go either way with the margin for error on both sides very slim.  Clearly whoever scores first in this type of matchup will have a big advantage.

This one could be a multi-goal New Hampshire win if Vermont has to chase the game. On the other hand, New Hampshire could have a hard time penetrating the Vermont defense if the Catamounts go up on them. The fact that New Hampshire will secure the number one spot with a tie is a huge plus for the Wildcats.

Stanford (8-1-1) vs. Oregon State (7-4-0) – Saturday, April 10 – Stanford overcame a two goal Oregon State advantage to secure a 3-2 win when they hosted the Beavers back on March 13. It was an impressive come from behind win for a Cardinal team that didn’t panic and continued to stick with their game plan.

The pressure that Stanford applied took a toll on Oregon State and the contest turned around when Will Richmond and Zach Ryan scored in the 34th and 35th minutes of the contest to knot the score at 2-2. Gabe Segal added what proved to be the game-winner for Stanford in the 80th minute of the match.

The loss appeared to take the wind out of the sails of an Oregon State team that entered the match with a perfect 6-0-0 record but has since gone 1-4-0 including close losses to Washington 2-1, California 1-0 and UCLA 2-1.

A win over the Cardinal could give Oregon State the edge they need to get back on track but to prevail history has established that the Beavers will have to put together a full ninety-minute shift.

LMU has had a productive season to date but a win over a Saint Mary’s team that has been the frontrunner in the WCC for the last two seasons would put an exclamation mark on the end of their regular season play while a loss would put a question mark on it. Saint Mary’s has defeated LMU for the past three seasons.

LMU comes into this contest with a 4-0-2 mark in WCC play. Saint Mary’s comes into the game with a 3-1-1 mark in WCC play. The Gaels come into the contest with LMU reeling from an unexpected 3-2 loss to Pacific during which they allowed Pacific to net three unanswered goals in the first 25 minutes of the match. The loss to Pacific halted Saint Mary’s 22-game unbeaten streak in conference play.

LMU has allowed only one goal in their seven contests to date but they are not an explosive team on the offensive side of the ball.  After opening the spring season with a 3-0 win over Santa Clara and a 2-1 win over Gonzaga they have managed a total of only two goals in their last four contests. Sophomore midfielder Noel Caliskan (1g, 3a), the 2019 WCC Freshman of the Year, looks to be among the key catalysts on the offensive side of the ball for the Lions.

Forwards Lucas Andrews (3g, 1a) and Andrew Rotter (2g, 0a) and midfielder Sebastian Schacht (2g, 1a) are among the keys to Saint Mary’s attack.

This one could come down to which keeper, Saint Mary senior Nichola Lapinid or LMU redshirt sophomore Jacob Jackson, has the best day between the pipes.

This one could go either way.

Georgetown (6-0-2) vs. St John’s (5-4-0) – Saturday, April 10 – Georgetown enters the contest off a 5-1 win over Connecticut in what looked to be their most complete game of the year on both sides of the ball. That contest was the last at Georgetown for defender Rio Hope-Gund and midfielder Jacob Montes. Hope-Gund departs for preseason camp with Orlando City while Montes departs for a tryout in Europe. Both have played a key part in Georgetown’s success during their tenure on the Hilltop.

Georgetown under the guidance of head coach Brian Wiese is a very balanced, opportunistic, and deep team with a lot of lineup options. Nonetheless the departure of players like Hope-Gund and Montes creates a gap that is not easy to fill and raises the question of the impact that it will have on Georgetown’s ability to continue to secure wins in the close contests.

The Hoyas gutted out a 1-0 win over St. John’s when they hosted the Johnnies on March 13 with freshman midfielder Chris Hegardt contributing the game-winner when he placed the rebound of senior forward Derek Dodson’s shot into the back of the net.

Dodson and sophomore midfielder Dante Polvara (6g, 2a) look to be the X-Factors in the Georgetown offense. Senior Paul Rothrock (2g, 1a) is among several go-to guys in the Hoyas midfield who will need to pick up the slack that the departure of Montes creates.

St. John’s has not played since defeating Connecticut 1-0 on March 20. Dr. David Masur and his staff will have the Red Storm ready to play but the time off could impact their effectiveness and rhythm in the early going. Junior forward Tani Oluwaseyi (5g, 3a) is the X-Factor in the Johnnies attack. Oluwaseyi has the ability to score in multiples if not contained.

Look for this Big East contest to be a physical contest with no prisoners taken.

If Georgetown plays to their potential, they will prevail but the Johnnies are capable of pulling off the upset if the departure of Hope-Gunn and Montes keeps the Hoyas from settling into a rhythm and controlling the pace of the match.

Michigan State (4-6-0) vs. Michigan (5-3-1) – Sunday, April 11 – On the surface, Michigan should win but a deeper dive warrants a closer look at this one. Michigan State has played everyone close and comes into this Big 10 tournament contest with the momentum of a 4-1 win over Wisconsin and a 1-0 win over Ohio State. Michigan State also has an early season 1-0 win over a very good Penn State team.

This is a good Michigan team but they have had a roller coaster season. They come into this one off an unexpected 3-2 loss to Wisconsin. Senior midfielder Marc Ybarra (2g, 5a) is the guy who sets the pace for Michigan on the offensive side of the ball. Senior defender Jackson Ragen (4g, 0a) and sophomore goalkeeper Owen Finnerty anchor the defense.

It will take a total team effort on the part of Michigan State to prevail and they can’t afford any letdowns on the defensive side of the ball that cause them to have to chase the contest.  If Michigan does not bring their A game they could be in trouble.

Virginia Tech (5-6-2) vs. Notre Dame (8-8-0) – Friday, April 9 – The Hokies were without the firepower that senior Kristo Strickler brings to the offensive side of the ball for the most of the spring season. With Stricker on the pitch they are a much stronger team as reflected in their upset of North Carolina 1-0 in Chapel Hill in their last contest. That win added added merit to Virginia Tech’s case that they warrant an at-large berth in the NCAA Tournament. Just how the at-large berths are going to be awarded in a reduced spring NCAA tournament field remains to be seen. Nonetheless a win over Notre Dame looks to be essential for the Hokies to keep that dream alive.

Ditto that for Notre Dame’s aspirations for an at-large berth. The Irish come into this contest off consecutive losses to Wake Forest, North Carolina, and Pitt and need a win to bolster their resume.

Jacob Labovitz (6g, 1a) and Strickler (4g, 1a) are the keys to Virginia Tech’s attack. Jack Lynn (8g, 0a) and Aiden McFadden (4g, 4a) are the go-to guys for Notre Dame. If either pair gets into a rhythm, they have the potential to pose matchup problems for opposing defenders.

Both teams have been vulnerable at times during the spring season on the defensive side of the ball.

UMBC (3-3-1) vs. NJIT (3-4-1) – Friday, April 9 – This one is significant due to the fact that the winner will secure one of four spots in the American East Conference Tournament.

NJIT topped UMBC when the two sides squared off in Baltimore on March 9 with senior forward Regsan Watkins contributing the game-winner. Look for Regsan to again factor into the outcome.

This is NJIT’s first season as a member of the America East. UMBC is a relatively young team with five freshmen in the starting lineup. Accordingly, a berth in the four-team America East Conference Tourney will serve as building block and momentum builder for the winner.