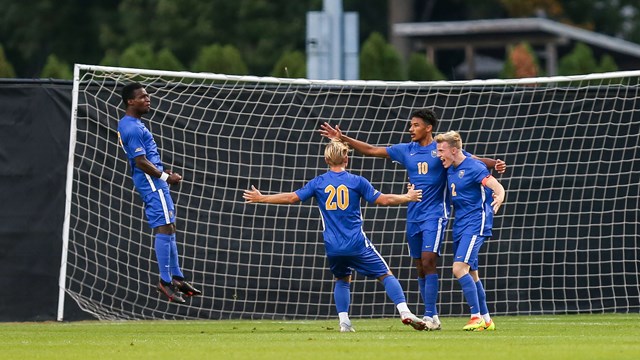 College Soccer News brings you up to date with a quick look at the outcome of fall contests so far and a few thoughts regarding what has taken place and what to expect moving forward.

A Little Background – The Participants

The Atlantic Coast Conference minus Boston College and the Sun Belt Conference which consists of Central Arkansas, Georgia Southern, Georgia State and Coastal Carolina are the two conferences that are playing a scaled down fall season. Kentucky, South Carolina, UAB who are members of Conference USA in men’s soccer and  Mercer out of the Southern Conference are among other teams playing a limited fall season.

Coming off of a lengthy offseason, the fall season has not lacked intensity as players have been eager to get back at it but it also has had the look and feel in the early going of what you might expect to see in a traditional spring season play in years past with teams knocking off the rust, and experiencing a learning curve as they seek to jell as a team and settle into a rhythm of play on both sides of the ball.

Teams in the Atlantic Coast Conference usually ease into conference play with a slate of resume building non-conference opponents that hone their skills before they get into ACC play and begin the process of beating up on each other. That’s not the case this fall with a pretty much conference only schedule.

Georgia State has looked good with season opening wins on the road over Mercer and South Carolina.

Wake Forest opened up with an impressive 3-1 win on the road over Louisville and Pittsburgh looks to have plenty of offensive firepower with a season opening 3-1 on the road win over a Notre Dame team that already had the benefit of a game with Kentucky under their belts.

The announcement that the NCAA Division I Council has proposed moving the 2020 fall men’s college soccer championships to the spring of 2021, conditions permitting, has created a little light at the end of the tunnel for programs not currently playing. Under the proposal the spring season would get underway on February 3, 2020 and run through April 27, 2021 with a thirty-six team NCAA Tournament beginning on April 30, 2021.

On-going due diligence by players and programs is warranted and needed to maintain the safety of players and to facilitate the eventual return by all to the field of play. The lessons learned by the teams that are currently playing and traveling should provide some best practices based on expeirence that can be utilized by others.

Several freshmen have made an impact in the fall season to date. Forward Daniel Russo at Notre Dame, midfielder Nick Pariano at Duke and forward Bertin Jacquesson at Pittsburgh are among the newcomers who have made key contributions.  Look for the play of newcomers in general to continue to improve as they gain experience.

The Results To Date On The Field Of Play

Notre Dave 1 – Kentucky 0 – September 17 – The Irish and the Wildcats kick off the 2020 fall season with Notre Dame prevailing behind solid team defense and a goal in the 62nd minute of play by freshman forward Daniel Russo.

Georgia State 2 – Mercer 1 – September 18 – Georgia State won its fourth straight contest over Mercer with senior forward Aris Briggs scoring in the 10th and the 81st minute of the contest.  Junior forward Trevor Martineau netted the lone goal for Mercer in the 69th minute.

South Carolina 2 – Georgia Southern 0 – September 19 – Sophomore Logan Frost scored what proved to be the game-winner in the 32nd minute for the Gamecocks. Sophomore forward Brian Banahan added the second South Carolina goal with ten seconds remaining in the contest.

It looked like Central Arkansas might take charge when Edorardo Calzola scored in the 53rd minute to give the Bears a 2-1 advantage but Aodhan O’Hara converted a penalty kick for UAB in the 61st minute to give the Blazers new life. UAB prevailed in overtime when Buete found the back of the net for the second time in the 95th minute.

Kentucky 4 – Duke 2 – – September 21 – Kentucky got back into the win column and got their attack in gear at home after a season opening 1-0  loss on the road to Notre Dame.  Midfielder Jack Doran, who missed the 2019 season due to injury,  gave Duke the early lead when he converted a penalty kick in the 18th minute. The Wildcats netted their first goal of the year when Aime Mabika sent a header into the back of the frame out of a corner kick in the 25th minute. Daniel Wright responded with a Duke goal in the 33rd minute. Kalil ElMedkhar then sent a blast into the back of the net in the 42nd minute to knot the match at 2-2.

Kentucky took control of the contest in the second half with Bailey Rouse sending a header into the net out of a corner in the 76th minute to break the tie and give Kentucky a 3-2 advantage. Junior forward Daniel Evans then scored for Kentucky from six yards out in the 86th minute to close the books on the Blue Devils for the evening and conclude the scoring.

Kentucky had an eighteen to six advantage in shots.  It was a good rebound win for the Wildcats who are now 1-1-0 season to date.  Duke will seek to take advantage of the experience they gained in this one when they return to Durham to host NC State.

Mercer 3 – Georgia Southern 0 – September 22 – This one was all Mercer. The Bears outshot the Eagles 23 to 3 taking control in the second minute of play when midfielder Dylan Gaither scored out of a free kick from just outside the box. Mercer got the best of the run of play for the remainder of the half but was unable to find the back of the net and the score remained 1-0 at halftime. Forward Gideon Dawson scored at close range for Mercer with a double assist from Kevin Kim and Ricardo Packer Jr. in the 51st minute and junior forward Trevor Martineau added the final goal in the 64th minute of play.

Georgia State 3 – South Carolina 1 – September 24 – Matthew Fearnley and Jeryn Hodge scored within a 53 second span in the first half of play to give Georgia State the edge they needed to secure the win over the Gamecocks and put a halt to a twelve match South Carolina winning streak against the Panthers. Kyle Gurrieri scored South Carolina’s lone goal in the 68th minute. Freshman Simon Carlson sealed the win for Georgia State when he scored in the 85th minute of the match. Both teams had an eleven shot evening.

Wake Forest 3 – Louisville 1 – September 25 – This match between two ACC teams was considered a non-conference contest. Wake Forest came out strong with senior forward Machop Chol finding the back of the net in the 5th minute and sophomore forward Calvin Harris scoring in the 35th minute of play. The teams went into halftime with the Demon Deacons up 2-0. Louisville forward Pedro Fonseca scored out of a free kick in the 47th minute for Louisville to narrow the gap to 2-1. Junior forward Kyele Holcomb added the insurance goal for Wake Forest when he converted a penalty kick in the 51st minute after being fouled in the box.

The Deacons played without redshirt senior back and College Soccer News Preseason All-American Michael DeShields who was injured in Wake Forest’s exhibition match against Pittsburg. DeShields is expected to make a complete recovery.  The Demon Deacons were also without the services of midfielders Aristotle Zarris and Justin McMaster who are recovering from ACL injuries.

The season opening win over the Cardinals was a solid start for a Wake Forest program that is celebrating its 40th season of men’s soccer.

Georgia Southern 3 – UAB 2 – September 26 – Georgia Southern did a good job of taking advantage of the scoring opportunities that came their way to secure their first win of the season after season opening losses to South Carolina and Mercer.  Midfielder Alhaji Tambadu and forward Adam Davie scored in the first half of play to send the contest into intermission with the Eagles up 2-0. Midfielder Gaye Diadie scored out of a corner kick in the 67th minute for Georgia Southern to make it a 3-0 contest.

Midfielder Cale Loughrey scored from twenty-eight yards out and midfielder Grayson Dupont scored with less than ten seconds remaining for UAB to close the gap to 3-2 but it was too little too late for the Blazers.  UAB is 1-1-0 while Georgia Southern is 1-2-0.

Duke 1 – NC State 0 (ot) – September 26 – Duke head coach John Kerr secured his 200th career win when freshman midfielder Nick Pariano scored from 12 yards out with less than ten seconds remaining in the contest. Will Pulisic had one save in goal for Duke. Leon Krapf had one save in goal for NC State. Both teams played well on the defensive side of the ball but both teams struggled to get into a rhythm on the offensive side of the ball.

Pittsburgh  3 – Notre Dame 1 – September 26 – The contest was knotted 1-1 at halftime but Pitt took charge in the second half due to an own goal and a goal by freshman Bertin Jacquesson in the 73rd minute of play to secure the win. Alexander Dexter scored for Pitt in the first half. Michael Pellegrino scored Notre Dame’s lone goal in the first half.

This was considered a non-conference contest. The two play again on October 30 in a match that will count in the ACC standings. Pitt played without College Soccer News Preseason All-American senior forward Edward Kizza.  It was a very good on the road win for a Pittsburgh team that looks to have all the ingredients needed to build on the success the program had last year.