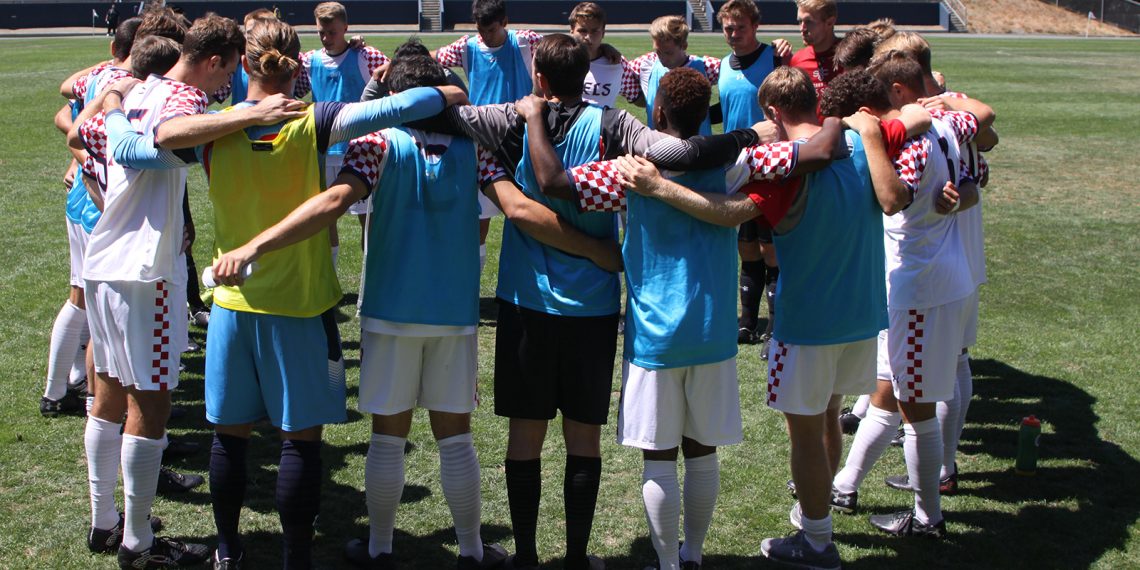 Washington – The I love you, I love you not team in the United Soccer Coaches Poll, has been the bungie cord team to date in the coaches’ rankings.  The Huskies are 5-2-0 with a 3-2 loss in overtime on the road to Denver and a 1-0 loss at Portland.  Washington, currently number fifteen in the CSN Poll and sixteen in the United Soccer Coaches Poll, has the opportunity to perhaps generate a little stability in terms of their standing when they host local rival Seattle, a team that has had their own ups and downs so far this year, on Sunday.  Bragging rights are at stake in this one.

Wake Forest returns to the scene of the crime when they travel to Historic Riggs Field to face Clemson on Friday night.  Clemson halted Wake Forest’s nine game winning streak when the two teams last faced each other at Riggs Field in 2016.  The Demon Deacons will arrive with a perfect 7-0-0 record and number one ranking.  Clemson enters the contest with a 4-2-1 record that includes losses on the road to Creighton 2-0 and Boston College 3-2.  Clemson has had trouble putting together two good halves this year.  In both of their losses, one of the best backlines in the country was exploited.  Pardon the American football expression but this contest is a goal line stand of sorts for the Clemson defense.  The Tigers are capable of pulling off the upset but only if they put together a full ninety minutes of play.

Saint Mary’s College is off to a 7-0-0 record during which time they have outscored opponents twenty-five to four.  Junior forwards Jake Rudel (7g, 1a) and Anders Engebretsen (6g, 2a) have powered a very productive attack.  The Gael defense has been solid but was sluggish in their most recent 4-3 win over a UC Riverside team that is 0-7-1.  Saint Mary’s hosts U.C. Santa Barbara on Wednesday and travels to tangle with UC Davis on Saturday.  Both opponents will be difficult to defeat.  This is a good Saint Mary’s team but just how good remains to be seen.

Saint Louis – New head coach Kevin Kalish looks to be putting the swagger back into the step of a program that has been absent from the NCAA Tournament field since 2014.  Kalish, a former All-American as a player at Saint Louis, has deep ties to the program which is a plus.  The Billikens are off to a 3-1-2 record which includes wins over Marquette and Tulsa and ties with Notre Dame and SMU.  The Billikens have faded as the season progressed in recent seasons.  That may not occur under Kalish.  Saint Louis will host rival SIUE under the direction of Mario Sanchez on Friday.  The Cougars five game unbeaten streak was halted when they were upset at home 2-0 by Loyola Chicago last Saturday. It was a disappointing result for a team that had been playing very well on both sides of the ball.  The Saint Louis and SIUE match looks to be among the more hotly contested contests of the weekend.

Air Force – After opening the season with a 2-1 loss on the road to Virginia Tech, the Falcons have won seven straight including signature wins over Colgate 3-0 and San Francisco 2-1 to improve to 7-1-0.  This is an experienced senior led team that is building on the success they enjoyed last year when they had fourteen wins and returned to the NCAA Tournament for the first time since the 2012 season.  Senior midfielder Tucker Bone (4g, 4a) and senior forward Austin Dening (5g, 1a) power an attack that has produced twenty goals to date while senior back James Sims and junior goalkeeper Andrea Seazzu anchor a defense that has allowed only five.  The Falcons begin WAC play when they travel to Kansas City on Saturday to face UMKC.  Air Force is playing as well together as team as any program in the country.  It remains to be seen whether or not they can sustain their current level of performance in conference play when the margin for error is slim.

North Carolina – The number three ranked Tar Heels are about to run the gauntlet.  It begins this Friday with a contest on the road against Notre Dame in South Bend.  After that their dance card includes Clemson, UNCW, Virginia Tech, ODU, N.C. State, Winthrop, Boston College and Virginia.  A stout UNC defense led by backs Alex Comsia, John Nelson, and Mark Salas and goalkeeper James Pyle has only allowed a total of three goals to date.

Manhattan – Jasper Power.  Manhattan was once considered an easy win but that began to change last year when they were 9-8-1 overall with a 6-3-1 mark in MAAC play.  The Jaspers secured their first win over a ranked opponent in program history Tuesday night when junior defender Adrien Awana scored with thirty-six seconds remaining in regulation to give Manhattan the edge they needed to upset Fordham 1-0 in the Battle of the Brox.  The win was Manhattan’s first over Fordham since 2004. The Jaspers, who are now 7-1-0, will seek to keep the momentum going when they begin MAAC play on Wednesday, September 27 against Monmouth.

Georgetown – Georgetown showed some grit when they rebounded from a disappointing 3-2 loss at home to Xavier by upsetting Duke 1-0 in Durham on Tuesday night to improve to 4-2-1.  We are four weeks into the season and the Hoyas have yet to secure back-to-back wins.  They could accomplish that when they host DePaul in a must win Big East contest on Friday.  Georgetown has underachieved to date but the win over Duke could signal a turning point for a team that has to mature quickly with contests against Louisville, Marquette, Butler, Maryland and Villanova on the horizon.

Oregon State – The Beavers, unbeaten in six-straight games, have a chance to pick up a big win when they square off with Portland on Friday.  The current unbeaten streak is the longest Oregon State has had since the 2005 season.  Senior Don Tchilao (3g, 2a) and freshmen Gloire Amanda (3g, 0a) and Sofiane Djeffal (1g, 2a) have been among the difference makers on the offensive side for first year head coach Terry Boss. The Beavers continued success will hinge on their ability to stay focused and put together a full ninety minutes of play.  There is reason for cautious optimism at Oregon State.

Bradley – Buzzer Beaters.  The Braves are off to 5-0-2 record that includes wins resulting from goals scored with just a few ticks remaining in regulation against Oral Roberts and Purdue Fort Wayne.  Bradley begins MVC play when they travel to face Central Arkansas on Saturday.

Rhode Island – Defense Rules.  The Rams defeated Providence 3-0 on Tuesday to improve to 6-0-0.  Rhode Island has recorded six consecutive shutouts. They will seek to keep their win and shutout streaks alive when they host Brown on Saturday.  The Rams have also displayed a balanced attack that has produced a total of fifteen goals with nine different players finding the back of the net.

Stanford – The Cardinal have found the back of the net six times in their last three contests after scoring only one time in their first three matches.  Senior Amir Bashti and redshirt freshman Zach Ryan have been among the key contributors.  Stanford has allowed a total of only one goal in their six contests to date.  The Cardinal is undefeated with a 3-0-3 record in the one statistic that makers the most. Stanford hosts Pacific on Thursday in what could be a difficult match before beginning Pac-12 play the following Thursday when they host San Diego State.