A Few Men’s College Soccer Contests To Keep An Eye On This WeekEnd. 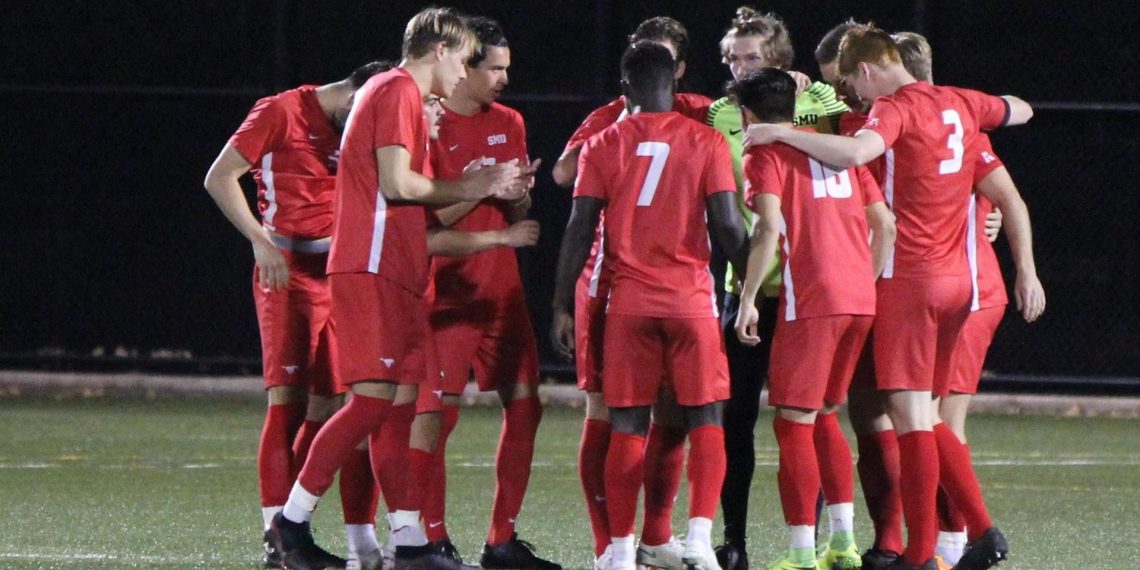 The Outcome Of These Games Will Impact Standing In Conference Play And On The National Scene.

Oregon State (6-0-0) vs. Stanford (5-0-0) – Saturday, March 13, 2021 – This is the marquee matchup of the weekend. It is a something has to give contest between two programs that have been very productive to date on both sides of the ball.

Oregon State led by Gloire Amanda (7g, 5a), Sofiane Dieffal (4g, 0a) and Mouhameth Thiam (2g, 5a) has scored a total of seventeen goals while a defense anchored by a solid back line and in goal by Adrian Fernandez has allowed a total of only two goals.

Stanford, powered by Zach Ryan (5g, 5a), Will Richmond (3g, 2a) and Gabe Segal (3g, 1a) has put seventeen in the back of the frame. The Cardinal defense anchored by an equally stout backline and by goalkeeper Andrew Thomas has allowed only one goal.

Both teams are 3-0-0 in Pac-12 play.  Both teams have the ability to score in multiples but in this matchup it is highly unlikely that the winner will score more than two goals.

Oregon State is traveling in uncharted waters and is playing on the road but they will arrive in Stanford believing they can win it. They already have impressive on the road wins over Washington and California.

This is about the number of games into the season where Stanford has experienced a wakeup call at times in the past but that has normally occurred when the Cardinal has had a less experienced team or one that is in the process of jelling. This team seems to have settled into a rhythm and consistent style of play.

Stanford is among the best in the nation at taking advantage of the opportunities that come their way. As a result, it normally takes a very disciplined effort to top the Cardinal.

This one is up for grabs.

UCF has not had the season to date that was expected with a dance card that includes a 1-0 loss to Tulsa and a 2-1 loss to South Florida at home and a 3-1 loss to Tulsa on the road. The Knights may turn their season around but that is not likely to happen without an increase in productivity on the offensive side of the ball.

SMU began the spring season like gangbusters with a 2-0 win over Memphis on the road, a 7-0 shellacking of South Florida on the road and a 5-0 thumping of Memphis in Dallas before unexpectedly shooting themselves in the foot with a 2-0 loss on the road to Temple in which they were the recipient of two red cards. One was awarded in the 63rd minute and the other with only four minutes remaining in the game. The Mustangs will have the opportunity to regroup at home after playing three of their four games to date on the road.

UCF is a much better team than their record indicates but it is clear that they are a team that is missing something. It would appear that they have not fully adjusted to not having the big play ability that All-American forward Cal Jennings provided during his tenure in Orlando. The Knights have only managed a total of four goals so far in five contests while allowing seven. The good news is that UCF is coming off a 2-0 win over Memphis during which they came out strong and focused and didn’t allow a goal in the early going as they have in their three losses to date.

SMU has a very balanced attack led by forward Papa Ndoye (4g, 0a) and playmaker midfielder Noah Hilt (1g, 4a). With the the exception of the loss to Temple, they have been rock solid on the defensive side of the ball. All teams have down games at times in which they simply have trouble getting on track. Such games often serve as a wakeup call of sorts.  Whether the loss to Temple was one of those games for the Mustangs or the beginning of a downward trend remains to be seen.

If the Mustangs get their attack in gear and stay organized on the defensive side of the ball, they should top UCF.  Nonetheless this one belongs on the upset watch list simply due to the uncertainties in regard to which UCF team and which SMU team will show up.

FIU (3-1-0) vs. Marshall (4-1-1) Saturday, March 13, 2021 – This CUSA contest should give both FIU first year head coach Kyle Russel and Marshall head coach Chris Grassie a much better idea of the strengths and weaknesses of their teams and just how competitive they will be.

FIU has a 3-2 win over FGCU, a 5-0 win over the University of Fort Lauderdale and are coming off a 2-0 win over CUSA foe FAU. The Panthers also were upset at home 1-0 by North Florida in a contest in which they had to play a man down for a large portion of the match. The contest with Marshall will be FIU’s first game of the spring season away from home.

Junior Johan Penaranda has been solid in goal for FIU while redshirt senior midfielder Alessandro Campoy looks to be among the keys to their productivity on the offensive side of the ball.

Marshall has played very well at times with a 2-0 win over ETSU, a 1-0 win over Bowling Green and a 2-0 CUSA win over South Carolina. Their lone loss is a 2-1 defeat in overtime to nationally ranked Akron on the road. They also have a season opening 1-1 tie with Division II Ohio Valley. The Herd seeks to build on a banner 2019 season in which they were 16-3-3, won the CUSA Tournament Title, and secured a berth in the NCAA Tournament for the first time in program history.

The big question in this just one is whether or not FIU can contain a Marshall attack powered by forwards Milo Yosef (2g, 1a), Jamil Roberts and Vitor Dias (6g, 2a).

St. John’s (4-2-0) vs. Georgetown (2-0-1) – Saturday, March 13, 2021 – The Johnnies have had an up and down season so far with 2-0 wins in Big East play over Connecticut and Providence and 1-0 losses to Seton Hall and Villanova.  The win over Providence was a momentum builder that the Red Storm hopes will carry over to the match with Georgetown.

This is a good St. John’s team but just how good remains to be seen. Junior Tani Oluwaseyi, the 2019 Big East Offensive Player of the Year, is the main man in the St. John’s attack. He has the ability to score in multiples when in gear.

The Johnnies have only allowed a total of four goals to date. The key to their chances of upsetting Georgetown look to hinge on their ability to apply the pressure that will enable them to create opportunities on the offense side of the ball without leaving themselves vulnerable on the defensive side of the ball.

The defending national champion Georgetown Hoyas, the number one team in the College Soccer News Top 30 National Poll, have a 3-0 win over Villanova, a 2-1 win in overtime against Seton Hall and a 0-0 tie with Providence in their last outing. The Hoyas have looked good to date but also look to be a team that is still in the process of shaking off the rust. They have not yet settled into a rhythm of play that they can sustain for a full ninety minutes of play.

Sophomore midfielder Dante Polvara (4g, 0a) has provided the punch to date in the Hoyas attack. Senior Jacob Montes is a prime timer who will play a key role in the level of success Georgetown has this year.

This is a talented Georgetown team so it is hard not to pick the Hoyas but they have been a bit sluggish so this one could be interesting. Look for both teams to be conservative in the early going with the pace picking up as the match continues.

Campbell has gotten the best of High Point in recent history but both of these teams are talented and well coached so this one could go either way. Both will be prepared.  High Point, led super sophomore MD Meyers (8g, 1a), has an attack that has produced a total of fifteen goals while their defense has only allowed three. High Point’s lone blemish to date is a 1-0 loss is to a very competitive Liberty team

Jalen James (4g, 1a) and Franck Momo (2g, 2a) have powered a Campbell attack that has scored 14 goals while their defense has allowed a total of five. Campbell’s lone loss is to nationally ranked UNCW 2-0 on the road. Campbell also has an unexpected 2-2 tie with USC Upstate.

Both teams have goal scorers who are capable of getting hot and taking over the contest. It will be interesting to see how that plays out.

Clemson (9-2-1) vs. Virginia Tech (4-3-2) – Saturday, March 13, 2021 – Clemson opened the spring season with a 3-1 win over Syracuse in the friendly confines of Historic Riggs Field. The Tigers are adjusting to life without the offensive firepower that forwards Kimarni Smith and Grayson Barber provided in the 2020 fall season. Both have taken their games to the professional level.

Senior midfielder Callum Johnson stepped up and provided two goals in the win over Syracuse. Forward James Brighton is among others who the Tigers will likely count on to fill the rather big void that exists. The contest with Virginia Tech should provide some insight into Clemson’s offensive effectiveness. There is a lot to like about a Clemson team that returns a very solid backline along with George Marks in goal.

Virginia Tech opened spring play with a solid 2-0 win over Coastal Carolina on the road but followed that up with a disappointing 4-2 loss at home to ACC opponent Duke. The Hokies now have their backs against the wall with a very challenging contest against Clemson. They will have to tighten up significantly on the defensive side of the ball if they hope to have a chance to top the Tigers.