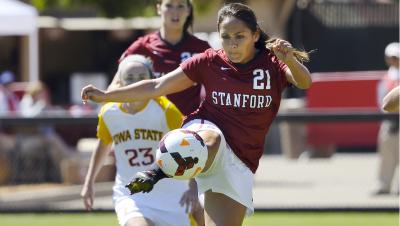 Stanford’s season-opening start was arguably the most impressive in the nation as the Cardinal made a cross country trip to Tobacco Road and returned with a pair of victories over nationally-ranked North Carolina and Duke.

Of course, it didn’t hurt that the Cardinal had three world-class players return to the team just days before Stanford headed to Chapel Hill to face the Tar Heels. Sophomore goalkeeper Jane Campbell, freshman midfielder Andi Sullivan and sophomore outside back Stephanie Amack spent most of Stanford’s preseason training camp with the United States U-20 team competing at the 2014 FIFA World Cup in Canada.

While the U.S. U-20 team was eliminated earlier than expected (losing in the quarterfinals to North Korea in penalty kicks), head coach Paul Ratcliffe’s squad welcomed the trio back with open arms.

“It was a great boost to our team,” Ratcliffe said. “They are some of the better players in the country representing the U-20 level. It gave us a lot of confidence and they all played significant minutes for us. We were really fortunate to have them back.”

Campbell garnered Pac-12 Goalkeeper of the Week honors after posting two shutouts, including nine saves in a 1-0 overtime victory at then-No. 4 North Carolina, while Amack started both games and contributed to the Cardinal’s stingy defense. And, Sullivan, withless than a week with the Stanford program under her belt, made her collegiate debut against the Tar Heels and picked up her first assist against Duke.

Stanford, which moved up to No. 5 in the latest NSCAA Division I Top 25, infused one of the nation’s top recruiting classes into a lineup that already had some of the best collegiate players country.

“We have a good balance of some really good experienced players and some young players who have made an immediate difference,” Ratcliffe said. “There’s good internal leadership.”

“The new mix of players with the incoming freshmen – we’re just clicking,” Amack said. “I don’t know how to describe it. It’s been a very joyful preseason.”

Stanford may have picked up the most impressive road wins of opening weekend, but No. 1 UCLA definitely took the award for best defensive performance. The Bruins allowed just one shot in a pair of 3-0 victories over Maryland and UC Irvine. The defending NCAA champions have shut out seven of their last eight foes dating back to last season.

But UCLA’s next opponent may put up more of a fight as No. 9 North Carolina visits the City of Angels on Friday, Aug. 29. UNC may have dropped its opener to Stanford, 1-0, in overtime, but the Tar Heels took nine shots in the contest. Two days later, North Carolina tallied 21 shots in a 1-0 win over Ohio State. It will be just a matter of time before those shots are converted into points on the scoreboard. Will the Tar Heels be up to the challenge against UCLA All-America goalkeeper Katelyn Rowland, who just tied the school record for all-time shutouts? Tune into the Pac-12 Networks on Friday at 7 p.m. PT and find out.

North Carolina’s West Coast swing probably won’t get much easier after the UCLA contest as the Tar Heels head to No. 17 Pepperdine on Sunday. The Waves topped Cal Poly and Maryland to start the season, and then made the highest jump of any previously unranked team in the poll this week. The Waves boast a pair of scoring sisters, freshman Hailey Harbison and her sophomore sister Meagan, who both netted a goal against the Mustangs in the first contest of 2014.

Unlike Stanford, No. 18 UCF had to wait a little longer for the return of one of its best players from the FIFA U-20 World Cup, but she is coming back with a world championship. Sophomore forward Lena Petermann starred on Germany’s U-20 team, leading her home country to a World Cup victory on Sunday. Petermann netted the game-winning goal in Germany’s 1-0 overtime win against Nigeria at Olympic Stadium in Montreal. It was the third game-winning goal of the tournament for the 2014 American Athletic Conference Preseason Player of the Year. Petermann returned to UCF this week and will be ready to contribute when the Knights travel to No. 7 Texas A&M on Friday at 9 p.m. ET.

SIDEKICKS
Notre Dame first-year head coach Theresa Romagnolo started her career at the helm of the Irish with a 2-0-0 weekend, sparked by sophomore midfielder Morgan Andrews’ three assists in wins over Illinois and Oakland. The Irish hope to keep Romagnolo’s record perfect when they host No. 16 Texas Tech on Friday in the Notre Dame Invitational. Texas Tech posted a convincing 5-0 victory over Oral Roberts last Sunday to open the season.

No. 2 Florida State (2-0-0) heads to unchartered territory this weekend as the Seminoles travel to the state of Oklahoma for the first time in school history. FSU will face Oklahoma State (0-2-0) on Friday night before wrapping up its first road trip of the season on Sunday in Norman against Oklahoma (1-0-1).

Marquette (1-1-0) dropped out of the NSCAA Top 25 after dropping a 1-0 home match against Northwestern last Sunday. It was the Golden Eagles’ first regular season home loss since 2010. The Golden Eagles look to bounce back with a road game at Minnesota (1-1-0) on Friday and a home contest against Nebraska (1-1-0) on Sunday.

Amy Farnum Patronis covers Division I Women's Soccer for College Soccer News.  She can be reached at amyfarnum@yahoo.com