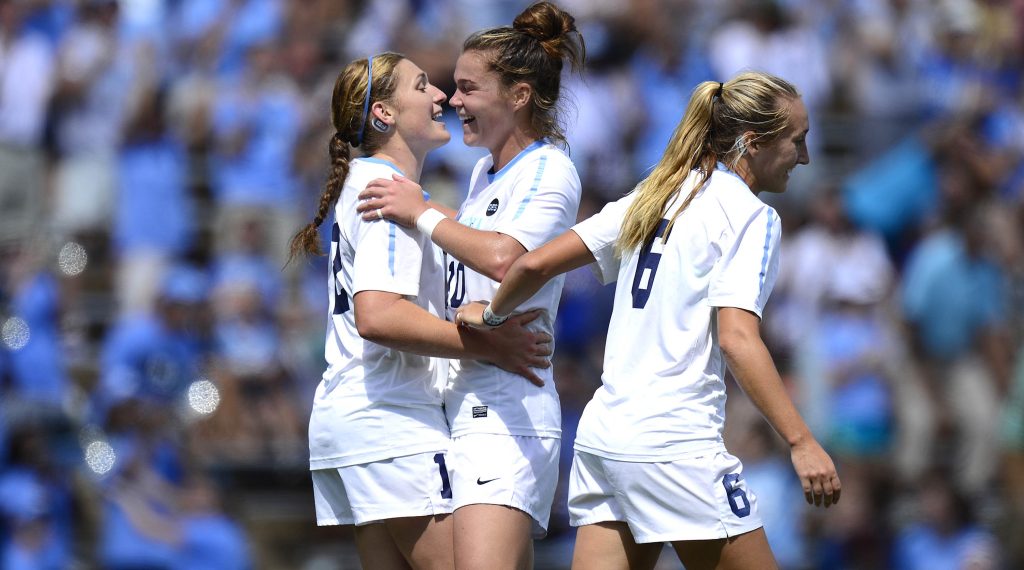 TAR HEELS AT THE TOP

North Carolina climbed to the top of the latest national rankings after previous No. 1 Virginia fell to Notre Dame in double overtime last weekend. The Tar Heels are the third Atlantic Coast Conference team to claim the No. 1 spot since the beginning of the season. Defending national champion Florida State started the year at the top of the polls.

With 32 goals in the first 11 games, UNC ranks fifth nationally with 2.91 goals per game. Their 32 goals have already surpassed their season total of 31 from a year ago, which happened to be the lowest goal production in program history by the perennial powerhouse. North Carolina puts their No. 1 ranking to the test Friday when it hosts Boston College at 7 p.m.

Speaking of the ACC, two of the top young players will meet when Pittsburgh travels to Tallahassee to face Florida State at noon Saturday. The spotlight will be on Pitt sophomore forward Taylor Pryce and FSU freshman midfielder Megan Connolly — this week’s ACC Co-Offensive Players of the Week.

Pryce has led the Panthers to eight consecutive victories and a 3-0-0 in the league standings. She tallied a pair of game-winning goals against ACC foes Wake Forest and Louisville last weekend, and leads her team with 14 points on the year. Pitt has already compiled a program-record nine victories this season and rank 14th nationally with a .438 goals against average.

Connolly contributed two goals and two assists in wins over top 10 opponents Clemson and Notre Dame last weekend as FSU stretched its ACC unbeaten streak to 14 games. She leads the Seminoles with four goals and seven assists. FSU puts its 16-match home unbeaten streak on the line against the Panthers.

Northwestern — a team that has not made an appearance in the NSCAA Top 25 since 1998 — broke into the latest rankings at No. 24 after posting shutout victories over Big Ten opponents Maryland and then-No. 11 Rutgers last weekend. It is the first time the Wildcats (9-1-2) have been ranked in any national poll since 2010.

Sophomore goalkeeper Lauren Clem anchors a Northwestern defense that has posted eight clean sheets this season. The Wildcats rank fifth nationally with a .319 goals against average

Northwestern’s new ranking and eight-game unbeaten streak sets the Wildcats up nicely for Sunday’s home match versus No. 12 Penn State. NU sits in second place in the Big Ten standings behind Minnesota (Big Ten 4-0-0), while the Nittany Lions are in a three-way tie for third place.

• No. 4 West Virginia has given up just two goals this season and is riding a nine-game winning streak — all of which happen to be shutouts — into a matchup with Big 12 foe TCU Friday. The Mountaineers are looking to extend their 27-game home unbeaten streak against the Horned Frogs. WVU tops the nation with 10 shutouts and ranks second nationally with a .181 goals against average.

• Washington State cracked the NSCAA Top 25 at No. 21 this week after starting the season with an 8-1-0 mark and opening Pac-12 play with a victory over Arizona State. The Cougars, who were picked to finish ninth in the league’s preseason poll, have had 10 different players score this season. They play host to USC Thursday night and UCLA Sunday.

• Auburn boasts its highest ranking in program history at No. 8 following a pair of 3-2 wins over LSU and then-No. 9 Florida last weekend. The two victories put the Tigers into second place in the SEC standings. Winners of four straight, the Tigers host Alabama Thursday in soccer’s version of the Iron Bowl, which will be broadcast live on the SEC Network at 6 p.m. CT. After the rivalry game, the Tigers will rest up for a week until they travel to South Carolina Oct. 8 for meeting of the league’s top two squads. The Gamecocks vaulted seven spots to No. 10 in the latest NSCAA poll on the merits of a 4-0-0 record in SEC play and an upset of national contender Texas A&M last week.