What’s On Tap For the Remainder Of The Week For the Top 15 Ranked Men’s Teams In The College Soccer News Poll. 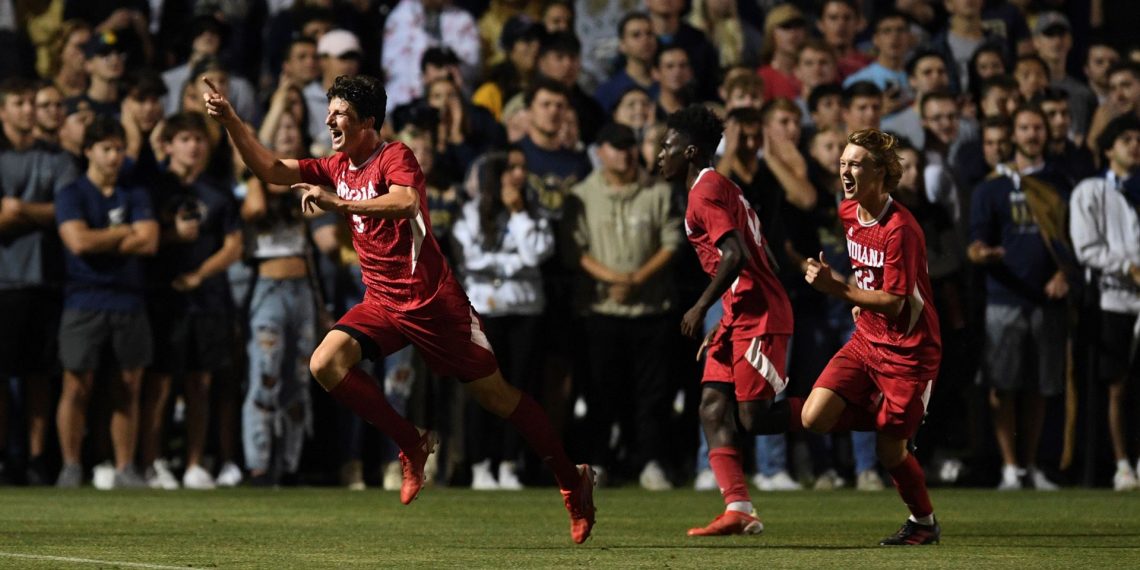 #1 Clemson (6-0-0) vs. Boston College (3-1-1) – Friday 6 p.m. – The Tigers open ACC play at home against a good Boston College team that will be playing on the road for the first time this year. It is tough to beat Clemson at Historic Riggs Field. The Tigers have a potent attack and a rock solid defense anchored by goalkeeper George Marks and backs Oskar Agren, Justin Malou, Hamady Diop and Charlie Asensio that has only allowed one goal to date but they could have trouble containing a Boston College attack led by junior forward Stefan Sigurdarson (5g, 0a) and junior midfielder Michael Suski (3g, 2a).

#2 Georgetown (5-0-0) at Creighton (1-2-1) – Saturday 8 p.m. – The Hoyas open Big East play on the road against an inconsistent but potentially dangerous Creighton team that upset Indiana 3-0 in Bloomington. Georgetown has done a great job to date of finding a way to win the close contests with consecutive 1-0 wins over Syracuse, Santa Clara, and Maryland. Creighton will have their hands full trying to contain the playmaking ability of junior midfielder Dante Polvara.

#3 Indiana (3-1-1) vs. Rutgers (5-0-1) – Friday 8 p.m. – The Hoosiers open Big 10 play against an undefeated Rutgers team that has been flying under the radar. A win over Indiana would change that. Seven different Scarlet Knight players have scored in their first six contests. This is a talented and experienced Hoosier team but they have been inconsistent in the early going. The outcome of this one will hinge on which Indiana team shows up. If it is the IU team that was thumped 3-0 at home by Creighton then the Hoosiers could be in for a long night.

#4 Washington (4-0-0) at Utah Valley (3-0-2) – Thursday 6:30 p.m. – Washington has been playing well on both sides of the ball scoring a total of 11 times while allowing only one goal. Utah Valley under first year head coach Kyle Beckerman is undefeated but Washington is by far the toughest opponent they have faced so far this year. The unanswered question is whether or not Utah Valley can contain a multi-dimensional Washington attack powered by the likes of midfielders Lucas Meek (3g, 3a) and Dylan Teves (1g, 3a) among others. Then again the Huskies will have the challenge of containing a Wolverine attack powered by sophomore forward Aaron Nixon (3g, 1a) and freshman midfielder Diego Castillo (2g, 2a) among others. This one could be interesting.

#5 Marshall (3-1-1) vs #6 West Virginia (4-0-1) – Friday 7 p.m. – This is the marquee match of the week from a state of West Virginia as well as national perspective. Marshall is a very talented and experienced team but they also look to be a team that has not fully jelled yet and settled into a rhythm. West Virginia has been the feel good team so far this year with big wins over Pitt and Penn State that rocketed them upward in the rankings but they have looked a little leg weary in their recent scoreless tie with Loyola Maryland and 1-0 win over Ohio State. Both teams will be fired up so look for the one that is able to play with intensity but remain patient and stick to their game plan the one that will prevail in this “something has to give” contest. Just what it is that is going to give remains to be seen and adds to the excitement and intrigue of this contest. The winner will gain a resume building signature win and a ton of momentum. One thing for sure – the interest that the fan base of both of these programs has generated is great for college soccer.

#7 Akron (4-1-1) at Ohio State (2-3-1) – Wednesday 7 p.m. – Ohio State upset Akron 1-0 on Wednesday in Columbus in this non-conference match. This contest establishes yet again that on a given night anyone can beat anyone. Akron came into the match as a heavy favorite coming off a 2-1 win over Pitt and a 1-1 tie with Indiana. Perhaps the Zips were looking past Ohio State to their matchup next Tuesday at Marshall. The Buckeyes scored in the 35th minute of the match and never relinquished the lead. It was a good gutsy and momentum building win that Ohio State will seek to build on and a disappointing loss and perhaps wake up call for Akron.

#8 Maryland (4-1-0) vs Michigan (3-2-1) – Friday 6:30 – This is the 2021 Big Ten opener for both programs. Look for an electric crowd to be on hand at Ludwig Field. The Terps come into the match off a 1-0 loss to Georgetown after opening the season with four consecutive wins. Michigan has played everyone close with both of their losses coming in 1-0 games to Duke and New Hampshire. Maryland will come out on the front foot and seek to control the match from the get-go. This one will hinge on Michigan’s ability to play through the pressure that the Terps apply and exert some of their own. The margin for error in this one for both teams is very small. Neither team will want to have the chase the contest from a goal down.

#9 Pittsburgh (4-2-0) at Wake Forest (2-2-0) – Friday 8 p.m. – Pittsburgh comes into the match off a 4-0 win over North Carolina in their ACC opener and a 1-0 win over Penn State in a non-conference match on Monday night. Wake Forest comes into the game off a disappointing and unexpected 3-0 loss on the road to Louisville last week in their ACC opener. Both teams have had trouble consistently settling into a rhythm on the offensive side of the ball and have not had the start to the season that was expected. Both are talented with players who are capable of getting into a grove and taking over a contest. This one is going to depend on which team is able to get into gear and control the tempo. It could come down to a single goal but chances are pretty good this will be a multi-goal match. The season is still young but this is a must win match for both teams.

#10 North Carolina (4-1-1) vs #24 Duke (4-1-0) – Sunday 7 p.m. – Look for defense to play a key role in the outcome of this one. Whoever scores first will have a big advantage. The ability to finish the scoring opportunities that come their way is going to be huge in this one. Both teams have struggled at times in that regard. Whoever scores first is going to have a huge advantage in this one. North Carolina is normally very solid on the defensive side of the ball but they are vulnerable if they have to chase the game against a Duke team under John Kerr that has posted four shutouts and allowed only one goal so far this year. A rapidly developing young Duke team is coming off a momentum building 1-0 win over Virginia Tech. Both Kerr and Tar Heel head coach Carlos Somoano will have their teams prepared to play. This one is up for grabs and could go either way depending on which team is able to settle into a rhythm that will enable them to apply pressure without losing their shape on the defensive side of the ball. A single goal could determine this one.

#11 Seton Hall (4-0-2) vs. Providence (3-1-1) – Saturday 6:56 p.m. – This is the Big East opener for both teams. Seton Hall has prevailed so far simply by their prowess on the offensive side of the ball. Their last three contests required overtime to determine a winner. The Pirates tied Virginia Tech 3-3 coming back from two goals down, topped NJIT 4-3 with Mattia Cella netting the game-winner and beat Army 3-2 with defender Johannes Pex contributing the game-winner. The Pirates are exciting to watch but they are living on the edge with a very small margin for error. If Providence is able to contain Seton Hall’s offense they could very well leave South Orange with a win.

#12 New Hampshire (6-0-0) vs Albany (4-2-0) – Saturday 6 p.m. – This is the season opening America East Conference contest for both schools. New Hampshire is doing an excellent job of closing out their contests. Albany is coming off an uninspired and unexpected 4-0 loss to Hofstra that the Pride pretty much controlled from the get-go. A veteran New Hampshire team with a midfield consisting of graduate students Linus Fallberg (1g, 0a) and Johann Von Knebel (1g, 1a), junior Rory O’Briscoll (2g, 0a), and sophomore Yannick Bright should get the best of the run of play and give the Wildcats the edge they need to prevail. An upset is possible but not likely.

#13 Virginia Tech (2-1-2) vs. Virginia (2-2-1) – Friday 7 p.m. – Virginia Tech is coming off a 1-0 loss to Duke during which they were held scoreless for the first time this year. This one will hinge on whether or not the Virginia backline of Oliver Gerbig, Andreas Ueland, and Paul Wiese along with netminder Holden Brown can keep what has been a balanced Hokie attack in check. The key for Virginia Tech is putting in two solid halves of play. A more experienced Virginia Tech team should prevail over a younger Virginia team that is still a work in progress. Nonetheless this one could go either way depending on which team is able to control the tempo of the match. Lapses in play on the defensive side of the ball will be costly in this one.

#14 Missouri State (4-1-0) at SIUE (1-3-2) – Sunday 5:30 p.m. – This is the 2021 MVC opener for both teams. Missouri State topped Eastern Illinois 2-0 on Wednesday. The last time the Bears played on the road they came out flat and on the short end of a 3-0 match with Tulsa. This veteran team is unlikely to do that again. SIUE comes into the match off a potential momentum building contest with rival Saint Louis in which they came from a goal down to record a 1-1 tie. Forwards Jon Koka (4g, 0a), Josh Dolling (0g, 3a), Aadne Bruseth (0g, 2a) and Nicolo Mulatero (2g, 0a) and playmaking midfielder Kian Yari should provide Missouri State the offensive firepower they need to prevail.

#15 Kentucky (4-0-1) vs. Western Michigan (2-2-0) – Sunday 4 p.m. – After opening the season with a 0-0 tie with Coastal Carolina, Kentucky has reeled off four straight wins including most recently 3-1 victories over Louisville and Duquesne in which they came from a goal down to secure the win. After beginning the season with losses to Virginia and Loyola Chicago, Western Michigan is undefeated in their last four contests. Midfielder Dylan Sing has played a key role in UWM’s resurgence contributing a total of four goals in their last three games. Western Michigan has also tightened up on the defensive side of the ball recording shutouts in three of their last four games. Kentucky could be in trouble if they spot Western Michigan a goal and have to chase the game but if the Wildcats powered by forward Eythor Bjorgolfsson (3g, 1a) and midfielder Bailey Rouse among others and a defense that has only allowed two goals plays to their potential they should prevail.