What Happened At A Glance – Friday October 30, 2015 – College Soccer Coast To Coast 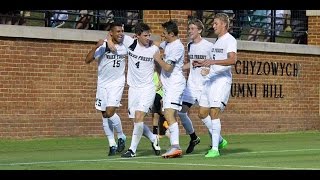 Stanford 2 – Oregon State 0 – The Cardinal pick up a solid on the road win in Pac-12 play to extend their unbeaten streak to fifteen games.  The only defeat on their record so far is a season opening 1-0 loss on the road to UCSB.  Slater Meehan scored in the 81st minute from fifteen yards out with an assist from Foster Langsdorf. Jordan Morris added the insurance goal in the 86th minute from twelve yards out with a double assist from teammates Mark Vreson and Drew Skundrich. Andrew Epstein had four saves to record the shutout in goal for the Cardinal. Stanford improves to 13-1-2 with a 6-0-2 mark in Pac-12 Play. Oregon State drops to 7-6-1 with a 2-3-1 mark in conference action.

California 1 – Washington 0 – Christian Thierjung continues to come up big for the Golden Bears netting the lone goal in this one with a great individual effort in the 88th minute of play out of a counter attack.  Jonathan Klinsmann had four saves in goal to record the shutout.  California is now 8-5-2 with a 3-3-2 record in Pac-12 play. Washington is shutout for the fifth consecutive contest to drops to 6-4-5 with a 2-2-2 mark in conference play.

Clemson 4 – N.C. State 1 – Clemson continues to take care of business with a decisive road win over a good N.C. State team.  Kyle Murphy scored at close range in the 28th minute after receiving a cross from Oliver Shannon. Michael Melvin netted the second Tiger goal from sixteen yards out in the 34th minute. T.J. Casner converted a penalty kick in the 42nd minute to make it 3-0 Clemson heading into intermission. Melvin added the final goal for the Tigers in the 77th minute of the match.  Phillip Carmon placed a shot inside the right post after receiving a pass from Philip Carmon to net the lone N.C. State goal in the 77th minute to conclude the scoring for the evening.  Clemson is 14-1-2 overall to conclude regular season ACC play with a 6-1-1 mark. The Wolfpack have now lost three out of their last four contests to drop to 8-5-3 with a 1-4-3 record in ACC play.

Wake Forest 4- Louisville 2 – The Demon Deacons continue to impress with a solid 4-2 on the road win over  Louisville on the road to improve to 14-1-2 with a 6-0-2 record in ACC play.  Louisville losses its third consecutive contest to drop to 6-8-3 with a disappointing 1-4-3 record in ACC action. Midfielder Hayden Partain scored twice for Wake Forest in the first eleven minutes of the match. Jacori Hayes made it 3-0 Deacons in the 17th minute. Danny Reynolds converted a header out of a corner kick for Louisville in the 29th minute of play to close the gap to 3-1. Jack Harrison added the fourth Deacon goal in the 64th minute of play to make it 4-1. Tim Kubel added the final score of the evening out of a free kick from twenty-two yards out to close the gap to 4-2.

North Carolina 0 – Virginia 0 (ot) – This scoreless ACC contest took place in Charlottesville. The Tar Heels played the last thirteen minutes of the match with ten men when forward Alan Winn was given a red card. No prisoners were taken in this physical contest in which North Carolina was awarded with 18 foul calls and Virginia 17. The Tar Heels had a 13 to 7 advantage in shots and a 7 to 6 advantage in corners. James Pyle had four saves in goal for UNC. Jeff Caldwell had two saves between the pipes for Virginia. North Carolina is now 14-1-2 and concludes regular season ACC play with a 6-1-1 record. The Cavaliers are 9-3-3 with a 4-2-2 record in ACC action.

Boston College 2 – Syracuse 1 – The Eagles halt a three game losing streak with a good ACC win at home over Syracuse to give Ed Kelly his 300th career win. Boston College improves to 9-6-1 with a 4-4-0 record in conference play while Syracuse drops to 10-5-2 with a 3-4-1 mark in ACC play.  Freshman forward Davock Trevor sent a one-timer into the far post in the 24th minute of the match that was set up by a long ball into the box from Dylan Pritchard and a nice pass from freshman forward Simon Enstrom to give Boston College the early lead. Enstrom took advantage of a Syracuse defensive miscue to add what proved to be the game-winning goal in the 37th minute. Syracuse picked up the pace in the second half but they were unable to fully close the gap.  Freshman defender Kamal Miller scored for Syracuse in the 85th minute to make it 2-1.

Air Force 3 – Grand Canyon 2 – An own goal in the 92nd minute of play proved to be the difference maker in this WAC contest. John Sims netted a header from ten yards out in the 55th minute to make it 1-0 Air Force. Niki Jackson converted a penalty kick for Grand Canyon in the 64th minute to knot it at 1-1. Jaric Martin placed a shot into the top left corner of the frame to put Air Force back on top 2-1. Jackson converted a header from ten yards out with an assist from Alex Halis to tie it once again at 2-2. Air Force improves to 6-8-1 with a 3-4-1 record in WAC play. Grand Canyon drops to 6-8-0 with a 2-5-0 mark in WAC play.

Buffalo 2 – Bowling Green 1 – Bowling Green struck first with Ryan James scoring out of a free kick from outside the box in the 76th minute of play to go up 1-0. Buffalo responded with goals from Marcus Hanson out of a corner kick in the 87th minute and Russell Cicerone in the 88th minute to secure a very good come from behind win in this Mid-American Conference contest. Buffalo is 7-5-4 with a 2-1-1 record in MAC play. After beginning the season with six consecutive wins, Bowling Green is now 8-8-1 with a 1-3-0 mark in conference play.

Cal State Fullerton 1 – UC Irvine 0 – (Wednesday) – Julian Okai converted a penalty kick in the 70th minute that resulted from an Anteater handball in the box to give the Titans the edge they needed in this one. David Rodriguez had one save in goal to record the shutout for Cal State Fullerton who improves to 10-7-1 with a 5-3-1 record in Big West play. UC Irvine drops to 5-10-3 with a 3-5-1 mark in Big West play.

San Francisco 3 – Gonzaga 1 – The Zags started strong with a Conner Bevans goal in the 9th minute of play set up by a cross from Jakob Granlund.  San Francisco came roaring back with first half goals from David Garrett, Davi Ramos out of a penalty kick, and Sean Bowman to take control and secure the win. San Francisco is 5-10-0 overall with a 3-1-0 mark in West Coast Conference play. Gonzaga drops to 6-8-1 with a 1-3-0 mark in WCC action.

UMKC 3 – UNLV 2 – Kevin Partida converted a header for UNLV after receiving a cross from Rodrigo Fuentes in the 13th minute. The teams went into halftime with the Rebels up 1-0. Guerrero Pino converted a header for UMKC in the 56th minute followed by a goal from Wes White in the 60th minute to go up 2-1. UNLV's Danny Musovski scored on a header in the 70th minute after receiving a cross from teammate Bradley Kamdem. UMKC responded with a game-winning header by Broc Cramer out of a corner in the 86th minute. UMKC improves to 5-8-2 with a 3-4-1 record in WAC play. UNLV drops to 10-5-1 overall with a 4-3-1 mark in conference play.

San Diego 3 – Pacific 0 – This one was scoreless at halftime. San Diego took charge in the second half beginning with an own-goal in the 51st minute followed by goals from Merlin Hoeckendorff and Michael Turner to secure their fifth straight win to improve to 9-4-2 with a 4-0-0 record in WCC play. Thomas Olsen had one save in goal to notch the shutout for San Diego. Curtis Goldsmith had seven saves in goal for Pacific.  Pacific drops to 1-12-1 overall with a 0-3-1 mark in WCC play.