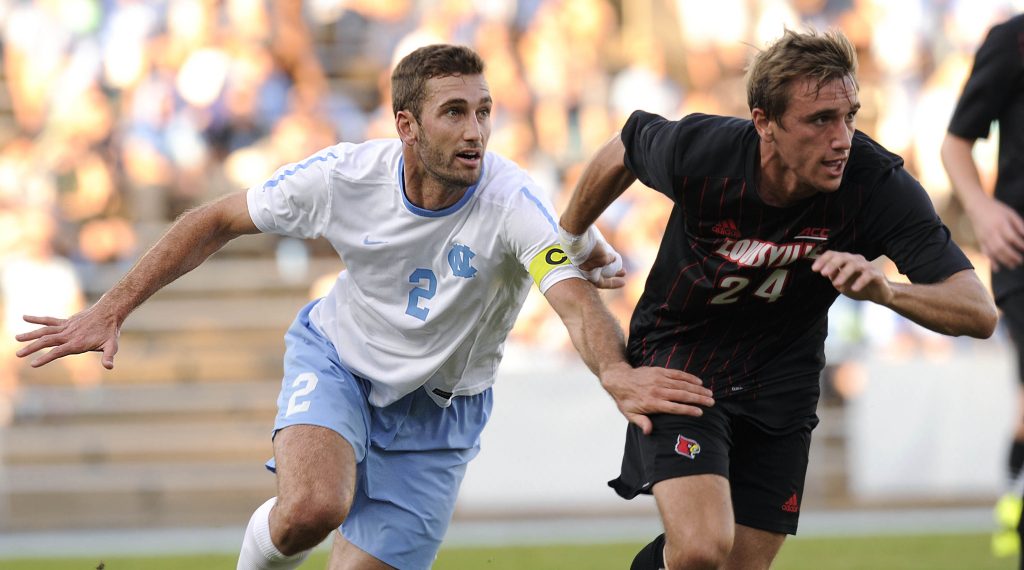 Stanford 2 – UCLA 2 – Foster Langsdorf converted a header with a double assist from Drew Skundrich and Eric Verso. Abu Danladi placed a shot in the lower right corner of the net after receiving a long ball played in by Jose Hernandez to tie it at 1-1.  Seyi Adekoya sent a drive into the lower left corner to make it 2-1 UCLA after being set up by a nice move and pass from Danladi.  Stanford Defender Brandon Vincent tied it at 2-2 in the 70th minute when he converted a penalty kick that resulted from a Bruin handball in the box to conclude the scoring for the evening. Stanford is 11-1-2 with a 3-2-1 mark in Pac-12 play. UCLA is 7-6-1 with a 3-2-1 mark in Pac-12 play.

Clemson 1 – Boston College 0 – Midfielder Thales Moreno netted the lone goal of the game in the 8th minute of play after receiving a pass from teammate midfielder Paul Clowes in this ACC match played at Historic Riggs Field. Andrew Tarbell had two saves in goal to record the shutout for the Tigers. Clemson improves to 13-1-2 with a 5-1-1 mark in ACC play. Boston College drops to 8-5-1 with a 3-4-0 mark in conference play.

Wake Forest 2 – Notre Dame 1 – Notre Dame took the early lead when defender Max Lachowecki scored from ten yards out with a double assist from Jeffrey Farina and Evan Panken. The teams went into intermission with the Irish up 1-0. Wake Forest came back to secure the win with goals in the second half from midfielder Jack Harrison in the 51st minute with an assist from Steven Echevarria and in the 87th minute from sophomore foward Jon Bakero after receiving a pass from Ricky Greensfelder. Wake Forest continues to roll and improves to 12-1-2 with a 5-0-2 record in ACC play. Notre Dame is now 8-3-5 with a 3-2-2 mark in conference play.

North Carolina 2 – Louisville 1 – All the scoring in this one took place in the second half of this ACC contest played at Fetzer Field in Chapel Hill. Louisville drew first blood when Daniel Johnson sent a blast into the back of the net with Tate Schmitt and Jon Zabasajja credited with the double assist. As he has done several times this year Tucker Hume jumped started the Tar Heel attack when he converted a header in the 64th minute to tie it at 1-1 after receiving a throw in from Jordan McCrary. Andy Lopez converted a header out of another throw in with Jonathan Campbell and McCrary providng assists.

Maryland 1 – Washington 0 – The Terps rebounded from a loss to Delaware on Tuesday to top visiting Washington from the Pac-12 Conference. An own goal in the 52nd minute was the only scoring of the contest. Maryland had a 24 to 7 advantage in shots.  Cody Niedermeier recorded the shutout in goal for the Terps. Ryan Herman had seven saves in goal for Washington.  Maryland is now 7-4-4 overall while Washington drops to 6-3-5.

Syracuse 2 – N.C. State 1 – The Orange come from behind to pick up a good win in ACC play in this contest to improve to 10-4-2 with a 3-3-1 mark in conference play while the Wolfpack drop to 8-4-3 overall with a 1-3-3 record in ACC play.  All the scoring took place after intermission. Midfielder Julius Duchscherer scored in the 67th minute to give N.C. State a 1-0 advantage.  Syracuse showed a lot of grit when they responded with a goal from forward Ben Polk in the 75th minute to knot the score and a header from Defender Louis Cross out of a corner kick in the 85th minute to secure the win.

Charlotte 2 – South Carolina 0 – The 49ers appear to be gaining momentum with their fourth straight win to improve to 7-4-2 with a 4-0-1 mark in CUSA play.  South Carolina on the other hand has now lost three straight to drop to 7-6-1 with a 4-2-0 mark in conference play.  Brandt Bronico scored out of a free kick from twenty-five yards out in the 3rd minute of play and forward Kyle Parker added the insurance goal in the 21st minute when he sent a rebound of his own missed shot back into the top left corner of the goal to net his eighth goal of the 2015 season. Charlotte has another big CUSA game coming up when travel to face New Mexico on Tuesday. South Carolina will seek to get back in the win column with they host FIU on Tuesday night.

Utah Valley 3 – Grand Canyon 2 – UV dodged a bullet when they had to come from two goals down to secure the win in this WAC match. Grand Canyon came out firing with Garcia Sanchez scoring out of a free kick just outside the box in the sixth minute and Niki Jackson converting a penalty kick in the fourteenth minute of the game to take an always dangerous 2-0 early advantage. Connor Salmon converted a header for Utah Valley in the twenty-second minute out of a corner, Skyler Milne tied it when he also scored out of a corner kick in the twenty-eighth minute, and Paul Hoffmeister scored from the top of the eighteen in the thirty-seventh minute to give the Wolverines the win.  Utah Valley improves to 12-3-1 with a 5-1-1 mark in conference play. Grand Canyon drops to 6-7-0 with a 2-4-0 mark in WAC action.

CSU Bakersfield 2 – Air Force 1 – Christian Duarte and Simon Doherty scored in the second half of play to give CSUB a two goal advantage. John Sims converted a header for Air Force after receiving a cross from Zach Hill to close the gap to 2-1. CSU Bakersfield is 5-4-4 with a 2-2-2 mark in WAC play. Air Force is 5-8-0 overall with a 2-4-0 mark in WAC action.

Robert Morris 2 – Fairleigh Dickinson 1 – FDU got on the board as a result of an own goal in the 41st minute of play. Robert Morris responded in the second half when Necco Brett controlled a rebound and placed it back into the net in the 51st minute and Zac Sherman placed a shot into the far left post after receiving a through ball from Lucas Puntillo. Robert Morris is 9-6-0 overall with a 3-1-0 mark in NEC play. FDU is 2-10-1 with an 0-3-0 record in conference play.