What Happened At A Glance – Friday October 16, 2015 – College Soccer Coast To Coast 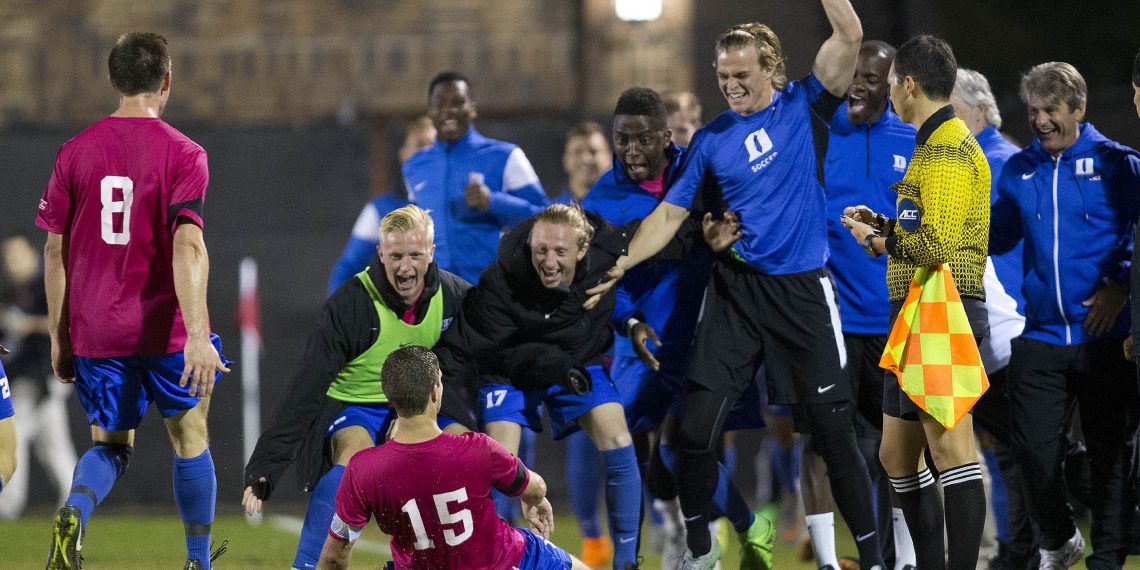 Charlotte 2 – FAU 0 – Kyle Parker converted a penalty kick and Dominic Bonilla drove a shot into the near post after receiving a back heeled pass from teammate Harrison Steadman in the second half to lead the 49ers past FAU in Boca Raton, Florida.  Austin Pack had two saves in goal to post his fourth shutout of the year to date.  Charlotte improves to 5-4-2 overall with a 3-0-1 mark in CSUSA play.  FAU drops to 0-10-2 overall with a 0-5-0 mark in conference play.

San Francisco 3 – Pacific 0 – David Garrett converted a header, Aaron Lombardi scored out of a free kick from forty yards, and Jonathan Faublich added the final goal from within the eighteen yard box after receiving a cross from Kevin De La Torre to power the Dons to a win. San Francisco is 4-9-0 overall with a 2-0-0 mark in WAC play.  Pacific falls to 1-11-0 overall with a 0-2-0 mark in WAC action.

Air Force 1 – UTRGV 0 – Tucker Axhoj netted the game winning goal for the Falcons in the 88th minute of play in this WAC match at Cadet Soccer Stadium. Freshman Tucker Bone contributed the assist.  Air Force improves to 5-6-0 with a 2-2-0 record in conference play.  UTRGV drops to 4-7-0 with a 1-3-0 mark in WAC play.

Stanford 2 – UCLA 1 – Amir Bashti converted a header in the 44th minute to give Stanford the early advantage.  UCLA responded four minutes later with an Abu Danladi goal to knot it at 1-1. Jordan Morris blasted a picture perfect shot into the upper right corner with a double assist from Slater Meehan and Eric Verso to secure an impressive and hard fought Pac-12 win on the road over the Bruins.  Stanford improves to 10-1-1 with a 3-0-1 record in conference play.  UCLA is now 6-6-0 with a 2-2-0 record in Pac-12 play.

Notre Dame 0 – Virginia Tech 0 (o.t.) – Both teams had ten shots with the Hokies having a 9 to 7 advantage in shots on goal but neither was able to come up with the big play needed to secure the win in this ACC contest that took place in Blacksburg, Virginia.  Chris Hubbard had two saves in goal for Notre Dame.  Ben Lundgaard also had two saves between the pipes for the Hokies.  The Irish are now 8-2-4 overall with a 3-1-2 mark in conference play.  A determined Virginia Tech team is 5-5-3 overall with a 0-3-3 record in ACC play.

Virginia 3 – Pittsburgh 1 – Virginia bounces back from a 1-0 loss to American on Tuesday night to secure a come from behind win over Pitt in an ACC match that took place at Klockner Stadium in Charlottesville.  Matt Bragg drove a shot into the back of the frame in the 30th minute of play to draw first blood and give Pitt a 1-0 lead.  Virginia took charge in the second stanza with Edward Opoku scoring out of a breakaway and freshman forward Wesley Wade adding the game-winner and an insurance goal to power the Cavaliers to the win.  Virginia is 8-3-2 overall with a 3-2-1 mark in conference play.  A Pitt team that is much more competitive than in the past is 5-6-2 overall with a 0-5-1 record in conference action.

South Florida 0 – Memphis 0 (o.t.) –  The Bulls took to the road and had a 13 to 10 advantage in shots but when it was all said and done the scoreboard was the same at the end as when this one started in this American Athletic Conference contest that took place in Memphis.  Spasoj Stefanovic had two saves between the pipes for South Florida.  Jake Leeker had six saves in goal for host Memphis.  South Florida is 9-3-1 overall with a 4-0-1 record in conference play.  A Memphis team that is better than their record indicates is 3-7-3 overall with a 1-2-2 mark in conference play.

Duke 6 – N.C. State 2 – Will the real Duke University team please stand up.  The Blue Devils do a great job of capitalizing on the scoring opportunities that came their way and roll to a solid 6-2 win over a very competitive Wolfpack team in this ACC match played at Koskinen Stadium in Durham.  Senior midfielder Zach Mathers netted a hat trick and  Tyler Hilliard, Ryan Thompson and Macario Hing Glover each added a single goal to lead Duke in this old fashioned wood shedding.  Julius Duchscherer and Clayton Sparks scored the N.C. State goals in this when it rains it pours contest from an N.C. State perspective.  An up and down Duke team improves to 6-6-2 with a 1-4-1 record in ACC play.  The Wolfpack drop to 7-3-3 with a 1-2-3 mark in conference play.

Louisville 2 – Boston College 1 (o.t.) – Midfielder Andrew Brody converted a header from within the box  in the 3rd minute of play after receiving a cross from freshman back Danny Reynolds as the fans on hand at Lynn Stadium in Louisville were just beginning to settle into their seats in this ACC match.  That 1-0 lead held until the 88th minute of play when midfielder Zeiko Lewis sent a one-timer into the near post for Boston College from inside the box out of a throw-in from Trevor Davock to knot it at 1-1 and send the game it into extra time.  Sophomore midfielder Jack Gayton settled it in favor of the Cardinals when he made the net move with a blast from twenty-two yards out that brought the Louisville crowd to their feet.  Louisville ups their record to 6-5-3 with a 1-2-3 mark in ACC play.  Boston College drops to 8-4-1 with a 3-3-0 mark in conference play.

Seattle 3 – CSU Bakersfield 1 – David Olsen scored twice within the first half of play and Agustin Andrade contributed a single score to give Seattle a commanding 3-0 advantage heading into intermission.  Julian Zamora scored unassisted for CSU Bakersfield to close the gap to 3-1 in the 54th minute of play to conclude the scoring in this WAC contest.  Seattle improves to 11-3-0 with a 4-1-0 mark in WAC play. CSUB drops to 4-4-3 overall with a 1-2-1 record in conference action.

Rutgers 4 – Northwestern 2 –  Drew Morgan, Brian Hawkins, and Miles Hackett scored to give Rutgers a 3-0 advantage.  Cole Missimo scored in the 64th minute and Elo Ozumba in the 69th minute for Northwestern to make it interesting but a goal by sophomore forward Jason Wright in the 70th minute of play sealed the win for a surging Rutgers team that has now won four straight to improve to 8-4-1 with a 3-3-0 mark in Big Ten play.  David Greczek had five saves in goal for Rutgers.  Zak Allen had five saves for Northwestern.  Northwestern drops to 5-6-1 with a 2-3-0 record in Big Ten play.

Utah Valley 3 – San Jose State 2 – Junior midfielder Skyler Milne made a mark for himself in the UV history books when he netted the first-ever hat trick in the history of the program to lead the Wolverines to a win over San Jose State in WAC play.  Utah Valley jumped out to an early 2-0 advantage but Jonathan Colunga and Luis Vargas scored for the Spartans to knot the score at 2-2 before Milne converted a penalty kick in the 88th minute to put this one on ice for UV.  The Wolverines improve to 11-3-0 with a 4-1-0 record in conference.  Utah Valley and Seattle are currently tied for the lead in points in WAC play.  A game San Jose State team drops to 4-8-0 with a 2-2-0 mark in conference contests.