Upsets On The West Coast – College Soccer – What Happened At A Glance – Coast To Coast – Friday, September 23, 2016 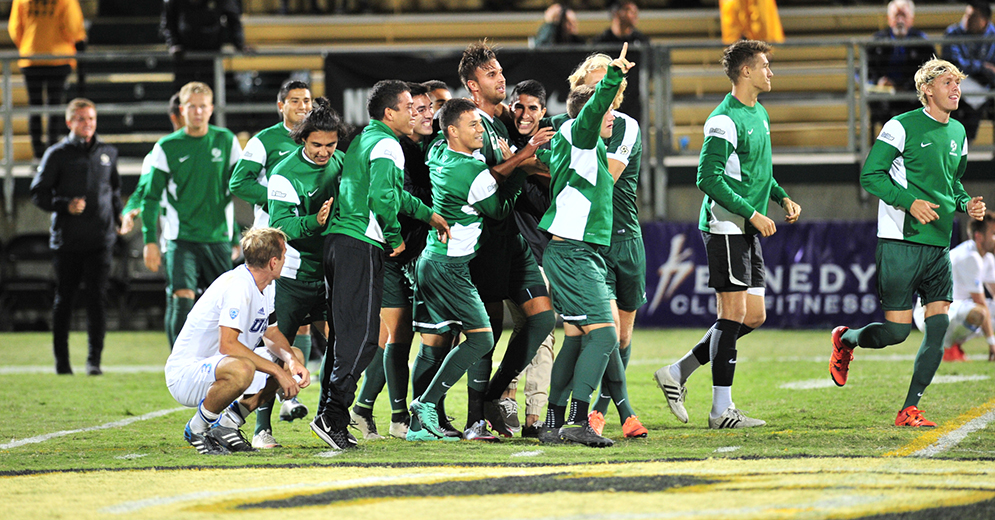 Irish forward Jon Gallagher sent a shot into the left corner of the net from twenty yards out with just eighteen seconds remaining in regulation to give Notre Dame the edge they needed to top visiting Syracuse.  Jack Casey game Notre Dame a 1-0 advantage when he scored out of a free kick in the 45th minute out of a free kick put in play by midfielder Evan Panken.  Syracuse knotted it at 1-1 when sophomore defender Miles Robinson sent a header into the back of the net out of a corner kick with an assist from midfielder Oyvind Alseth in the 79th minute.  Notre Dame improves to 7-1-0 with a 2-1-0 mark in ACC play while Syracuse losses their first contest of the year to drop to 8-1-0 with a 2-1-0 mark in ACC play.

Junior midfielder Jake Rozhansky who transferred to Maryland this year after two seasons at Virginia tallied what proved to be the game-winning goal for the Terps from five yards out with a double assist from defender Chris Odoi-Atsem and forward Eryk Williamson nine minutes into the second half of play.  A Michigan State own-goal in the 73rd minute gave the Terps a 2-0 cushion.  Cody Niedermeier had three saves in goal to record the shutout for Maryland.  Jimmy Hague had seven saves in goal for the visiting Spartans. This Big Ten affair was played before an electric Ludwig Field crowd of 7,391 fans.  The Terps improve to  6-0-2 with a 3-0-1 mark in Big Ten play. Michigan State is 5-2-0 overall with a 2-1-0 mark in conference action.  Terp head coach Sascho Cirovski stated, "This was our best and most complete game of the year."

North Carolina 5 – Boston College 0 – This margin in this Atlantic Coast Conference game was much greater than expected but also a little misleading.

The Tar Heels rolled over the Eagles at Fetzer Field in Chapel Hill to improve to 7-1-0 overall with a perfect 3-0 mark in conference play.  Boston College drops to 5-3-0 with a 1-2-0 mark in conference play.  Sophomore Nils Bruening from Hamburg, Germany was a scoring machine for the Tar Heels netting four goals in just forty-one minutes on the pitch.  The scoring began in the 33rd minute when Bruening one-timed a shot into the back of the frame after receiving a cross from forward Alan Winn.  Bruening made it 2-0 two minutes later after Winn played a ball to midfielder Nico Melo on the right flank who sent a well played cross into Bruening.  The teams went into intermission with UNC up 2-0. The Tar Heels opened the contest up when they netted three goals in just under three minutes in the last ten minutes of the contest.   Bruening scored again in the 82nd minute after receiving a cross from forward Zach Wright to make it 3-0 and then added his fourth goal of the evening a minute later with a double assist from Jack Skahan and Wright. Winn concluded the scoring in the 85th minute when he placed a shot into the top left corner of the goal from the top of the box after receiving a pass from freshman Jeremy Kelly.  James Pyle had six saves in goal to secure the shutout for the Tar Heels.

Clemson 2 – Virginia Tech 1 – The Tigers pick up a solid ACC win on the road coming from behind to top a significantly improved Virginia Tech team 2-1 at Thompson Field in Blacksburg.

The Hokies got on the scoreboard first with Elias Tamburini contributing the goal in the 15th minute of play when he controlled and then sent the rebound of teammate freshman midfielder Brendan Moyers shot in the net.  Clemson senior defender Aaron Jones skillfully placed a shot into side netting  out of a free kick from just outside the box in the closing minutes of the first stanza for to knot the contest at 1-1 and give the Tigers momentum .  Grayson Raynor scored the game-winner for the Tigers in the 87th minute of the match when he sent a bending ball into the upper corner of the net  with an assist from teammate Oliver Shannon.  Clemson is now 5-1-1 overall with a 1-1-1 mark in conference play.  Virginia Tech drops to 7-2-0 with a 1-2-0 record in conference play.   Ximo Miralles had a five save outing between the pipes for Clemson. Ben Lundgaard had three saves in goal for the Hokies.  Tiger head coach Mike Noonan stated, "Coming from behind and winning ACC games on the road is a testament to our player's commitment."  Virginia Tech mentor Mike Brizendine stated, "Obviously, we are disappointed we are walking away from this contest without any points but I thought the guys played strong."

Indiana 0 – Rutgers 0 (OT) – The Hoosiers continue to play rock solid defense but an inability to come up with the big play on the offensive side of the ball resulted in a scoreless tie in this Big Ten contest which was played in Piscataway, New Jersey.

Colin Webb recorded his sixth clean sheet of the season to date for IU with a five save evening in goal.  David Greczek had eight saves in goal for Rutgers. Indiana head coach Todd Yeagley summed the evening up when he stated, "I thought we created a lot of great chances."  He added, "In the end, it's disappointing we didn't get the win but our team defending and overall play has been very good and hopefully, we will be able to pick up some points heading it to these next Big Ten games."  Indiana is now 5-0-4 overall with a 1-0-3 mark in Big Ten play. Rutgers is 0-6-1 overall with a 0-3-1 mark in conference play.

Cal Poly 1 – UCLA 0 – The roller coaster ride continues for the Bruins who were upset 1-0 by Cal Poly on the road at Alex G. Spanos Stadium before a crowd of over 7,000 fans.

Senior forward Justin Dhillon's blast into the upper right corner of the frame from thirty yards out after receiving a ball from sophomore defender Nick Carroll in the tenth minute of play proved to be the difference maker in this one.  Junior Eric Kam had two saves in goal in route to notching the shutout for the Mustangs.  The win was the first for Cal Poly over a top ten ranked opponent since they upset UCLA during the 2013 campaign.  UCLA drops to 4-2-1 while Steve Sampson's Cal Poly team which appears to be gaining momentum improves to 2-4-1.

San Francisco 2 – Stanford 1 – Down goes Stanford.  Just when it looked like the Cardinal, who began the season facing the challenge of replacing five key starters from the 2015 national championship team,  was beginning to gel they took a step backward with a 2-1 defeat on the road to San Francisco at Negoesco Stadium before a crowd of 1,900 fans in this nonconference match.

The win was San Francisco's first over Stanford since 2007. Forward Jorge Ruiz scored in the 37th minute for the Dons when he placed a rebound in the back of the frame and David Garrett found the back of the net in the 56th minute of play from eight yards out to give San Francisco a 2-0 advantage.  Stanford closed the gap to 2-1 in the 86th minute of play as a result of a San Francisco own goal to conclude the scoring for the evening.  Cardinal head coach Jeremy Gunn stated, "San Francisco was fired up, had a tremendous crowd and great excitement. They were playing like it was a cup final and we were playing like it was a Sunday afternoon stroll."  Gunn added, "All credit to the way they played, but we have to look ourselves in the mirror and see about our attitude."  San Francisco head coach Eddie Soto stated, "Tonight there was a lot of grit, a lot of heart and a lot of belief." Soto added, "I think this gives our group a lot of belief that we can compete and we can compete with anyone." Stanford is now 3-2-3 overall while the Dons halt a four game losing streak to improve to 3-5-0.

Pacific 2 – San Diego State 0 – The Pac-12 took it on the chin once again Friday night in this non-conference contest against a surging Pacific team out of the West Coast Conference that has now won five straight to improve to 6-2-0.  The loss leaves San Diego State with a 4-1-2 record.

Camden Riley converted a header from six yards out after receiving a cross from junior midfielder Andres Ochoa to give the Tigers a 1-0 advantage in the 31st minute of play.  Senior forward Julio Cervantes made it 2-0 Pacific with a helper from Anthony Orendain in the 42nd minute to conclude the scoring for the evening.  Junior Curtis Goldsmith from Shingle Springs, California had three saves in goal to anchor a bend but don't concede anything Pacific defense.  Pacific mentor Ryan Jorden stated, "The guys do a great job in taking things game-by game. San Diego State is a great team and I'm pleased with how we continue to focus on the next challenge ahead of them."

It looked like it was going to be a Blue Devil evening when Brian White converted a penalty kick a mere twenty-six seconds into the game to give Duke a 1-0 advantage.  Pitt responded with a Luca Mellor header out of a corner kick put in play by Darcy Bloemen to tied it up at 1-1 in the 22nd minute.  The Blue Devils had the opportunity take the lead just before halftime when they were awarded another penalty kick but Pitt goalkeeper Mikal Outcalt made a nice save to keep Duke off the board and the teams went into intermission knotted 1-1.  Robert Moewes had a two save game in goal for Duke while Outcalt had a total of six saves for the Panthers.  Duke is 3-2-2 overall to date with a 0-2-1 record in ACC play.  Pitt is 1-5-2 overall with a 0-2-1 mark in conference play.

Midfielder Colton Cavey sent a curving ball into the left corner of the net with an assist from Isaiah Jackson in the 53rd minute and midfielder Jalen Crisler drove a header into the back of the frame out of a free cut served in by Brayden Sullivan in the 70th minute to put this one on ice.  Ben Willis had three saves in goal for Gonzaga.  Enrique Adame had eight saves between the pipes for UNLV.

Omaha's Emmanuel Hamzat scored the lone goal of the evening in the 87th minute of play. Jacob Weiler and Elvir Ibisevic assisted on the game-winner with Weiler sending a pass into the attacking third to Ibisevic who flicked a header to Hamzat who controlled it andmade a nice move in the box to create the space he needed to send a shot into the net to give the Mavericks the edge they needed to secure the victory.  Omaha improves to 3-3-3 while Air Force halts a four game winning streak to drop to 5-3-0.

Army tops Navy for the second season in a row with freshman Keenan O'Shea alertly taking advantage of a Navy defensive miscue to score from twenty-six yards out in the 67th minute of play to give the Cadets the edge they needed to secure victory.  Justin Stoll had three saves in goal as Army won the soccer equivalent of the Commander-in-Chief's Trophy as a result of wins over both Air Force and Navy for the first time since the 2007 season.  Army improves to 3-3-1 with a 1-0-0 mark in Patriot League action while Navy drops to 2-4-1 with a 0-1-0 mark in Patriot League play.

Fordham 2 – Columbia 1 (OT) – This back and forth contest could have gone either way but Fordham came up with the big plays needed to walk off the pitch a winner in overtime. .