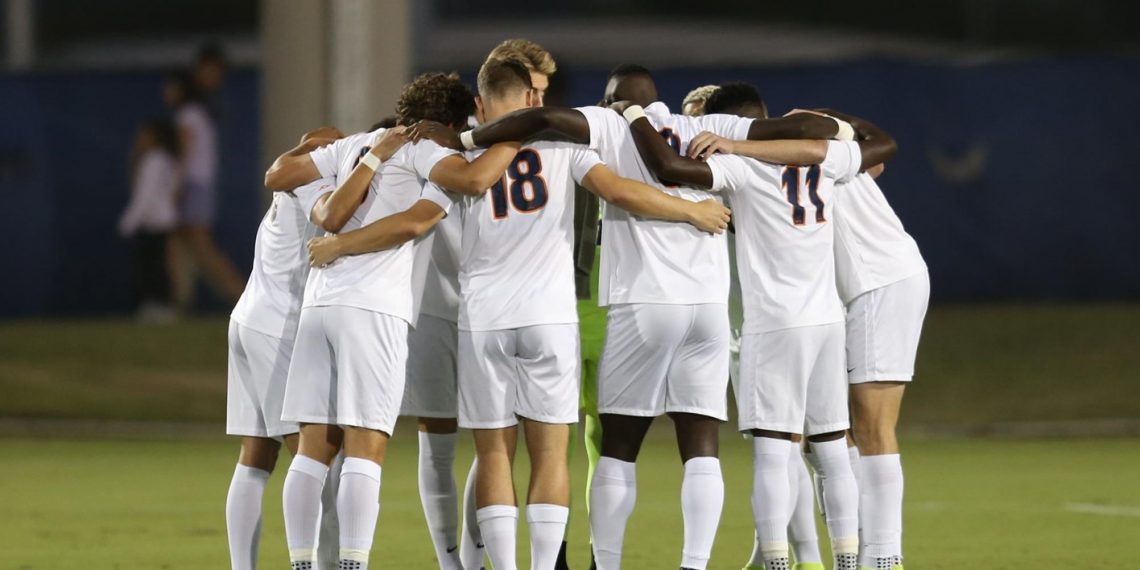 Upset alert. The potential for upsets exists this weekend in key matchups across the country.  Teams have now settled in and developed a rhythm on both sides of the ball but the grind can take a toll and the margin for error is always small when talented teams face each other.

Virginia (10-0-0) at Boston College (7-2-2) – Friday – This ACC matchup belongs at the top of the potential upset watch list. The number one ranked Cavaliers have been sharp on both sides of the ball but they face a tough challenge when they travel to tangle with a young Boston College team that has matured as the season has progressed. The Eagles are undefeated in their last five contests during which they upset highly regarded Wake Forest 2-1 at home and tied nationally ranked Virginia Tech 2-2 on the road.

SMU (9-0-1) at South Florida (6-2-0) – Friday – Add this one to the potential upset watch list. SMU comes into this American Athletic Conference contest in Tampa off a high profile and emotional 3-3 tie with Central Florida at home. It is a plus that the Mustangs had the grit to be able to come from two goals down to secure the tie but problematic that they put themselves in that situation.  The Mustangs have a high-powered attack led by forward Garrett McLaughlin (9g, 2a) and defender Eddie Munjoma (6g, 6a) among others that is averaging 3.4 goals per contest and a lock down defense that has been very effective with the exception of the contest with Central Florida.

South Florida’s resume to date includes a 2-0 win at home over Louisville. The Bulls have played well with the exception of a disappointing 2-0 loss at home to Ohio State during which they failed to take advantage of the scoring opportunities that came their way. South Florida has the chance of pulling off the upset if they put together two complete halves of play and finish their scoring opportunities. If they can’t, SMU will take charge of the match and depart Tampa with a win.

Oregon State (5-4-1) at Washington (10-1-0) – Sunday – Washington returns to the friendly confines of Husky Soccer Stadium after topping Stanford 2-1 and California 1-0 on the road last week. The Huskies are averaging 2.09 goals per game while allowing only .45.  Oregon State comes into this one off a 2-1 loss to California and a 1-1 tie with Stanford.  The Beavers have not had the season to date that many thought they might have but nonetheless they have several players with big play ability who could pose problems for Washington if they get into a grove.  Oregon State has defeated Washington three out of the last five times the teams have faced each other.

Washington is 5-0-0 at home this year and should extend that streak this weekend if they play to their potential and don’t let up.

St. Mary’s (9-1-0) at Santa Clara (6-3-1) – Saturday – On paper this West Coast Conference matchup should be all St. Mary’s but games are not played on paper. Santa Clara comes into the contest with the momentum that comes with a four-game winning streak that has included three consecutive shutouts.

This one could be interesting if, and that’s a big if, the Bronco defense anchored by freshman goalkeeper Guillem Badenes Mecho and sophomore center back Emil Christensen can contain a very high-powered St. Mary’s attack that is fueled by Anders Engebretsen (9g, 7a), Joseph Restani (7g, 2a) and Jake Rudel (4g, 1a).

Marshall (8-1-1) at Charlotte (8-0-2) – Saturday – Something has to give in this one. Charlotte has been solid on both sides of the ball and is undefeated after ten games for the first time since the 1991 season. The 49ers are tough to beat in general but even more so when they are playing at home. Marshall is also having a banner season so this one shapes up to be one of the better contests of the weekend. The Herd has won their last four games during which they outscored their opponents fourteen to two. Charlotte and Marshall are both 3-0-0 in CUSA play.

Michigan (5-2-3) at Indiana (7-1-3) – Sunday – Michigan is undefeated in their past seven games (4-0-3) and is 2-0-2 in Big Ten play.  The Wolverine defense anchored in goal by Andrew Verdi has posted four straight shutouts.  Transfer forward Nebosja Popovic (6g, 3a) has added another dimension to a Michigan offense that already included several very explosive finishers.

Indiana is unbeaten in their last thirty-two home matches at Jerry Yeagley Field which speaks volumes but Michigan has a chance to halt that streak if they are able to successfully apply pressure on the offensive side of the ball while remaining organized defensively.  Indiana’s backline of senior Simon Weaver, redshirt junior A.J. Palazzolo, redshirt freshman Daniel Munie, and sophomore jack Maher will be tested in this one. Ditto that for the Michigan backline of senior Abdou Samake, juniors Austin Swiech, Jackson Ragen and Joel Harrison and freshman Carter Payne.

Villanova (7-3-1) at St. John’s (10-1-0) – Saturday – The margin for error for both teams is small in this Big East Conference game that will take place in Belson Stadium. Defense has been Villanova’s calling card so far this year. The Wildcats anchored in goal by Carson Williams have allowed only three goals in eleven contests and will come into this one off a 1-0 win over a very good James Madison team. Nine of Villanova’s eleven games so far this year have been 1-0 contests. All three of their losses were 1-0 games. The Wildcats opened the year with a 5-0 win over Delaware but have only scored a total of six goals in their next ten matches. St. John’s has a balanced offense led by Tani Oluwaseyi (7g, 1a) that has produced a total of twenty-four goals and a stout defense that has allowed only five.

Chances are pretty good that this one will be decided by a single goal. Lapses in play on the defensive side of the ball will be costly.

FIU (8-0-3) at Kentucky (6-1-3) – Sunday – This is among the more intriguing matchups of the weekend. Both teams are very good but question marks exist regarding just how good.  Both teams have talented finishers who are capable of taking over a game. This one will come down to which team gets into a rhythm and puts in a solid ninety minutes of play. Look for the play in goal of Daniel Gagliardi for FIU and Enrique Facusse for Kentucky to play a key role in the outcome. FIU is 3-0-0 in CUSA play while Kentucky is 1-0-1. Kentucky comes into this game after a scoreless tie on the road Wednesday night against Indiana. FIU squandered a two goal lead against in-state foe FGCU on the road on Tuesday night but rallied to prevail 3-2 in overtime.

Virginia Tech (6-2-2) at Pitt (5-4-2) – Friday – Virginia Tech is experienced and battle tested. Pitt is still a work in progress but a dangerous work in progress to face. Edward Kizza (7g, 2a) is at the heart of Pitt’s attack. Kristo Strickler (8g, 3a) is the main man in Virginia Tech’s offense.  Both are capable of taking over the contest.  The Hokies come into this one off a scoreless tie on the road with Clemson.  Pitt comes into the match off a 6-0 win over Howard. This ACC contest is up for grabs.

UC Santa Barbara (8-2-2) at CS Fullerton (8-3-1) – Saturday – This is a momentum building game. UCSB has momentum. CS Fullerton is trying to regain it.  The Gauchos are undefeated in their last nine straight games. CS Fullerton needs a win in this Big West Conference contest to get back on track and halt a free fall. Last weekend the Titans were topped 1-0 by James Madison and 2-1 by Maryland on the road and they opened Big West play on Wednesday night with a 1-0 loss on the road to CSUN.  Junior forward Christian Pinzon (5g, 7a) and redshirt senior midfielder Oscar Flores (5g, 3a) power the CS Fullerton attack while senior Paul-Andre Guerin anchors a defense that has allowed a total of only ten goals in twelve contests.

A hot UC Santa Barbara team began Big West play on Wednesday with a 2-0 win over Sacramento State. A win over CS Fullerton would clearly signal that the Gauchos are back. UCSB is undefeated in their last nine games including a 3-3 tie with Stanford and a 2-2 tie with San Diego. Junior Rodney Michael (2g, 3a) is the catalyst on the offensive side of the ball for the Gauchos along with forward Will Baynham (4g, 5a) and freshman midfielder Finn Ballard McBride (4g, 2a).  Ben Roach anchors the UCSB defense in goal. This one is going to come down to the play on the defensive side of the ball.

Louisville (5-3-2) at Clemson (9-1-1) – Friday – This one will come down to whether or not Louisville can contain a high powered multi-dimensional Clemson attack. Clemson is coming off a 0-0 tie in which Virginia Tech was able to keep the Tiger offense in check. Louisville is coming off a 2-0 loss on the road to number one ranked Virginia.  Louisville has been up and down with impressive wins over Virginia Tech 2-1 and Georgetown 1-0 as well as unexpected losses to South Florida 2-0 on the road and NC State 2-1 at home.

It would be a mistake to look past Louisville but if both teams play to their potential Clemson should come out on top in this ACC match.

Wake Forest (9-2-0) at North Carolina State (7-2-1) – Friday – This is the strongest and deepest NC State team that George Kiefer has put on the pitch to date in his tenure in Raleigh. The Pack has ACC wins over Boston College, Louisville on the road, and Notre Dame and a loss to Virginia. Wake Forest is also 3-1-0 in ACC play with wins over Pitt, Syracuse and Clemson and a loss to Boston College. The winner of this one will have to put in a full ninety minutes of play.

Give Wake Forest and their offense the edge but if they fail to bring their “A” game on both sides of the ball the Wolfpack is talented and experienced and tough enough to pull off the upset.

Dartmouth (4-4-1) at Yale (6-0-2) – Saturday – Yale began Ivy League play last week with a 3-1 win over Harvard in which they had a twenty-three to nine advantage in shots. The Bulldogs are off to a great start but the level of competition picks up a click this week when Dartmouth comes to town on Saturday. The Big Green has not been as strong on the defensive side of the ball this year as they have in the past. Regardless, it remains to be seen whether the Yale attack led by senior midfielder Miguel Yuste (5g, 2a) and junior playmaker Mark Winhoffer (2g, 8a) can dent the Dartmouth defense. Dartmouth is also 1-0-0 in Ancient Eight play with a 1-0 win over Princeton.

Look for the margin of victory in this one to be a single goal.

Georgia State (6-1-3) at Georgia Southern (5-5-1) – Saturday – This Sun Belt Conference battle will take place in Atlanta. Georgia State goes into this rivalry match with Georgia Southern off a disappointing 3-1 loss to Lipscomb in which they were unable to get their offense in gear and allowed their opponent to place three in the back of the net for the first time this year. Georgia Southern is having what might best be described as a roller coaster season with highs and lows and will come into the contest off a 3-2 win over Wofford and a 1-1 tie with South Carolina in which the Gamecocks scored to tie the match in the final minute of regulation.

The big question in this one is whether or not Georgia Southern can contain Georgia State’s offense led by forward Aris Briggs (9g, 1a).  If they can then this one may go down to the wire.  If not, Georgia State should prevail.