UC Riverside Is Changing The Landscape by Barry Punzal 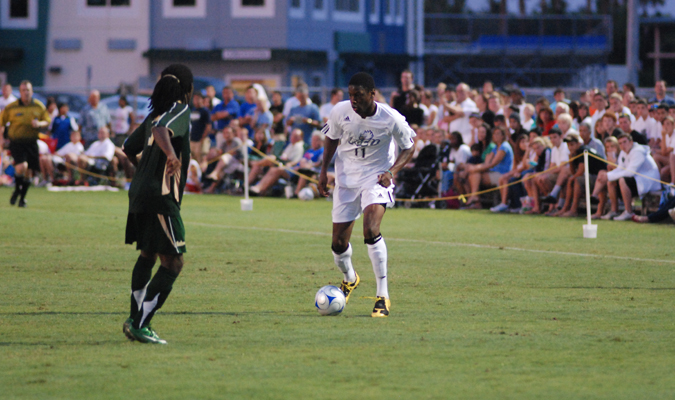 September 26, 2012 – There’s something shaking in the Inland Empire of Southern California and it’s not just the earth.

The men’s soccer program at UC Riverside is shifting the landscape in the West Region and nationally. The Highlanders are ranked 24th in the College Soccer News Top 30 and National Soccer Coaches Association of America polls. And, until last weekend, they were one of five Division 1 undefeated and untied teams in the country.

At 7-1-0, they open Big West play on Friday night against unbeaten and CSN No. 7-ranked UCSB at home, where they’re expecting another record crowd at their stadium. A record 2,016 rocked the place at last year’s game in which the Highlanders beat the nationally ranked Gauchos 3-1. They repeated the performance in Santa Barbara and also knocked off UC Irvine, which was ranked ninth in the country at the time.

UCR finished in the top four of the Big West standings and qualified for the conference tournament. It was eliminated by UC Irvine in the semifinals, but the Highlanders’ 9-6-4 record and RPI of 39 put them on the bubble for an at-large berth for the NCAA Tournament. They didn’t get in, but the fact they were in the conversation was a major breakthrough for a program that hadn’t experienced a winning season in its 11 years as a Division 1 program and went 1-16-1 just four years ago.

“We wanted to start over,” said junior holding midfielder Aaron Long who started as a freshman at Riverside a year after the nightmare season of 2009. “Coach (Junior Gonzalez) was playing a lot of the younger guys and we were trying to rebuild our team. We were going into games against Santa Barbara and UCLA hoping to fight and scrap for a tie or maybe a win. We were definitely the underdogs. We had no winning mentality.”

“After last year, we go in thinking we need to win, we expect to win,” Long said.

After the upsets over UCSB and UC Irvine, Long said the team felt great, but the attitude was: “We definitely expected to win. It wasn’t that big of a shocker. We didn’t feel it was an upset. That’s the biggest change.”

The program’s new culture can be attributed to a few things: the growth of the coach, an education in recruiting and a supportive administration.

Coach Gonzalez learned the hard way that there isn’t a quick fix to building a winning program. He recruited five top-flight players for the 2009 season and all five turned out to be academically ineligible.

“That kind of set me back,” he recalled. “I was actually hoping 2009 would be THE year and things kind of blew up. At that point, as a program, I dealt with the captains and dealt with the staff and kind of redefined who we were and got a new vision of where we wanted to be and changed everything.”

UC Riverside is now a program on the rise. The Highlanders went 6-11-1 in 2010 before last season’s breakout campaign. And, of their seven wins this season, five have been by shutout, which is one off the school record.

“I was planning on having some success,” Gonzalez said. “I didn’t think we’d be going undefeated until the Bakersfield game (a 2-0 loss). I’m not complaining and I don’t think the players are complaining.”

Gonzalez said receiving the funding to hire a full-time assistant coach has been a key factor to the program’s improvement. He brought in Tim Cupello from Syracuse in 2010. Before that he had a part-time assistant who came in just for training sessions and did very little administrative work.

“So, we were trying to run a Division 1 program with basically 1.5 staff members and 26 guys on the roster,” he said.

It was a far cry from his playing days at UCLA, where he was coached by the legendary Sigi Schmid and was a member of a national championship team in 1997.

Gonzalez noted that Bruin team had six players from the Inland Empire, including himself and U.S. national team captain Carlos Bocanegra.

Now that he’s gotten things going at UCR, Gonzalez is having success drawing recruits from the talent-rich area.

“We’ve reinvented ourselves and are getting the local academy kids to stay home,” he said. “We’re pretty deep with a lot of kids from top academies and clubs around the region.”

Among his key players, senior central defender Jose Diaz and junior winger Ivan Garcia hail from nearby Corona; Long is from Oak Hills; Ruben Palencia, who played in the L.A. Galaxy Academy, is from Fontana, and senior forward Junior Martinez is from Perris. Prominent freshman defender Eric Gonzalez, like Diaz and Garcia, is also out of Santiago High in Corona.

Coach Gonzalez also landed a prized out-of-state recruit in goalkeeper Ashkan Khosravi. He was playing high school and club soccer in Texas after living as a refugee in Turkey at age 14. He was granted political asylum from Iran, where he wasn’t permitted to play for his country’s Under-18 national team because he’s not a Muslim. He arrived in Texas, where an older brother lives.

Long said the quality of recruits is definitely better than when he arrived.

“It’s a huge difference. We’re getting top recruits and we’re competing with other schools,” he said. “Our recruits are definitely interested in coming here and they were not interested before.”

Said Gonzalez, “I see this place as very young and creating a tradition now. This is an exciting time for players coming in because they’re making a tradition for the program.”

Looking back on the recruiting mistakes of 2009, Gonzalez said he learned a valuable lesson.

“I was looking for the quick fix, but not thinking about the overall process. Since that point, we got more funding from the chancellor and our new AD is all about soccer. The momentum has started to move in the right direction.”

Barry Punzal is a contributing writer for College Soccer News.  He can be reached at barry.punzal@gmail.com