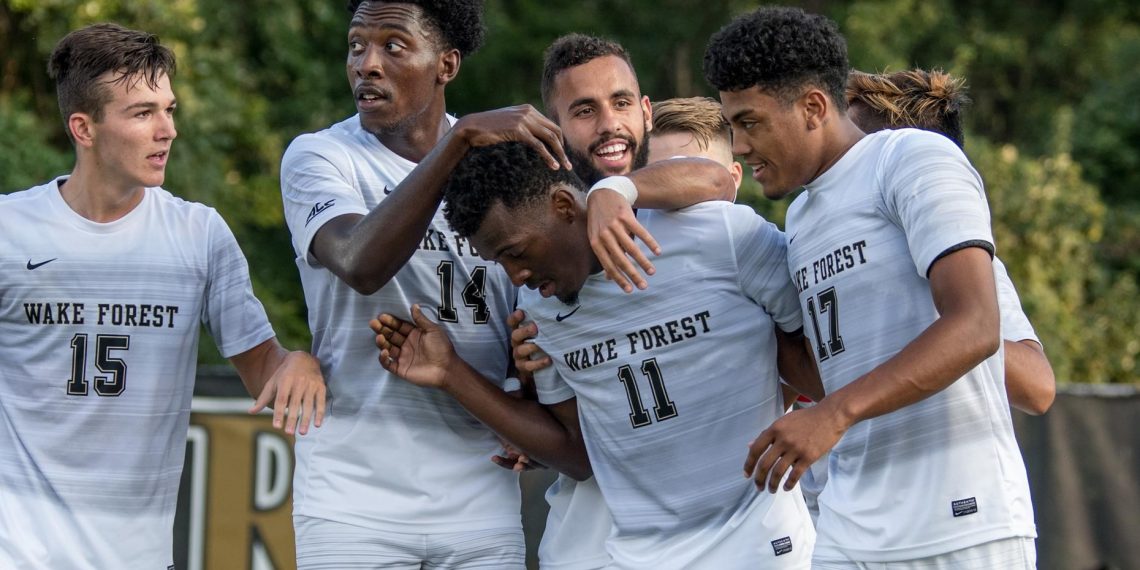 Wake Forest – It is not a surprise that Wake Forest is competitive.  What is a surprise is that they are a perfect 9-0-0 with signature wins over Indiana, N.C. State, Virginia Tech and Clemson.  Conventional wisdom held that some sort of learning curve would take place in Winston-Salem in the early going due to the departure of five of the Demon Deacons top six goal scorers from the 2017 team.  Instead a high-powered Demon Deacon attack, the most productive in the country, hit the ground running.  Wake Forest has scored twenty-eight times while allowing only seven goals against a very competitive slate of opponents.  Junior midfielder Bruno Lapa (8g, 6a) and sophomore forwards Omir Fernandez (6g, 2a), and Justin McMaster (4g, 3a) are among nine different Wake Forest players who have scored so far.  So much for conventional wisdom.  Wake Forest is now 64-8-7 under Bobby Muuss.

Denver forward Andre Shinyashiki  – Shinyashiki, the 2017 Summit League Offensive Player of the Year,  is a goal scorer with a work rate that is second to none.  Regardless, who would have predicted that he would have scored nineteen goals in an entire season much less after just nine contests.  The magnitude of his productivity on the offensive side of the ball is reflected in the fact that he has scored more goals to date than all but a dozen of the 205 NCAA Division I teams in the country.  Shinyashiki scored five times in 2015, nine in 2016, and nine in 2017. After being absent from the NCAA Tournament field last year, Denver is off to a great 8-0-1 start this year that includes signature wins over Washington and SMU and a tie with a very good Colgate team.  The Pioneers have an ambitious schedule in the month of October that includes games on the road against non-conference opponents Creighton, Virginia, Maryland, and Stanford.

Saint Mary’s College – No team has exceeded expectations so far more than Saint Mary’s. The Gaels, who were 6-6-5 overall last year, were picked to finish third in the 2018 West Coast Conference preseason poll behind Pacific and Portland.  They have roared out to a 9-0-0 record and are one of only two Division I teams that are unbeaten and untied.  Saint Mary’s features a potent attack that has produced a total of twenty-seven goals and a rock-solid defense anchored by goalkeeper Remi Prieur that has allowed only four goals while posting six shutouts.  The high-flying Gaels are currently the number ten team in the United Soccer Coaches poll and the number twelve team in the College Soccer News poll.  They have two non-conference contests remaining before beginning conference play.

Manhattan – Things are looking up for the Jaspers who began the season with a 7-0-1 record and are currently ranked as the number thirty team in the College Soccer News poll.  The success that the program has enjoyed so far is noteworthy when you consider that Manhattan won a total of eight games from 2014 through 2016.  The upward trend began last year when the Jaspers were 9-8-1 with a 6-3-1 record in MAAC play.  Manhattan was predicted to finish in the number five spot in the eleven-member 2018 MAAC preseason poll.  The Jaspers recently showed a lot of grit when they upset a ranked Fordham team 1-0.   A solid Manhattan defense anchored by goalkeeper Marcellin Gohier has allowed a total of only five goals so far.  Keep an eye on Manhattan.

Kentucky – The Wildcats emerged on the national scene when they upset Louisville 3-0 after beginning the season with wins over DePaul and Columbia.  They are currently ranked as the number seven team in the country in the United Soccer Coaches poll and the number six team in the nation in the College Soccer News poll.  The Wildcats are 6-0-1 with a 2-0-0 mark in Conference USA play.  A stout Kentucky defense anchored by backs Tanner Hummel, Leon Jones, Aime Mabika,  Keyarash Namjoupanah and Cole Guindon and sophomore goalkeeper Enrique Facusse has allowed a total of only two goals in seven contests.  Both of the goals allowed came in a 3-2 win in overtime against Lipscomb.  Kentucky is off to a great start but they can’t afford to look past anyone, as it appeared they did in the contest with Lipscomb, if they hope to maintain their current standing as the season progresses.  Junior forward JJ Williams has been a difference maker on the offensive side of the ball with five goals so far including three game-winners.

Air Force – After opening the season with a 2-1 loss on the road to Virginia Tech, the Falcons have soared winning eight straight to improve to 8-1-0.  A potent offense led by senior forwards Tucker Bone (5g, 4a) and Austin Dewing (6g, 1a) has produced a total of twenty-four goals with eleven different players finding the back of the net.  Air Force was picked to be the number three team in the 2018 Western Athletic Conference preseason poll behind Seattle and UNLV.  The Falcons, unranked at the beginning of the season, are now the number eight team in the United Soccer Coaches poll and the number nine team in the College Soccer News poll.  Whether or not Doug Hills' team can keep the momentum going and continue at the same pace as they journey into the heart of their conference schedule remains to be seen.  What we do know is that the Falcons now have a big target on their chests due to the success they have enjoyed to date.

Rhode Island – The Rams began the season with six straight wins during which they didn’t allow a single goal.  Their shutout streak was halted when they were defeated 1-0 by Brown in overtime.  Brown scored the game-winning goal with only fifty-eight seconds remaining in the second overtime period.  Rhode Island has a tough contest coming up on Saturday when they travel to face Fordham in their opening match in Atlantic 10 play.  The Atlantic 10 race looks to be wide open with ten conference members having a .500 or better record in non-conference play.

UC Davis – The Aggies emerged in the national rankings after beginning the season with a 6-0-2 record before being edged by fellow upstart and local rival Saint Mary’s College 1-0 in their last outing.  Dwayne Shaffer’s UC Davis team is currently ranked as the number seventeen team in the nation in the United Soccer Coaches poll and the number twenty-five team in the College Soccer News poll.  The Aggies, who are playing well on both sides of the ball, appear very capable of building on the 11-7-3 overall record and 7-2-1 mark in Big West play that they had in 2017.  A tenacious UC Davis defense, led by goalkeeper Wallis Lapsley and back Roy Boateng, has allowed a total of only six goals to date.

Portland – Count the Pilots, with a 7-0-2 record, among a handful of programs that have rocketed upward in the national polls.  Unranked at the beginning of the year, Portland is currently the number eight team in the College Soccer News poll and the number thirteen team in the United Soccer Coaches poll.  The Pilots have resume building wins to date over UCSB, Washington, Oregon State, and most recently Coastal Carolina in their lone away game to date.  Portland hosts a very good Northern Illinois team on Friday.  The mettle and the national standing of the Pilots will be measured when they begin West Coast Conference play.  Portland had a banner 2016 season in which they secured twelve wins, won the WCC championship for the first time since 2002 and returned to the NCAA Tournament field for the first time since 2009.  They had a good but not great 2017 campaign in which they won nine contests and didn’t earn a berth in the NCAA Tournament.  Portland is off to a great start but whether 2018 will be a good or great season remains to be determined.

UCLA – The Bruins began the season with an impressive 4-0 win on the road over Coastal Carolina. They also have a 1-0 win on the road over Maryland.  UCLA will seek to halt a two-game losing streak when they begin Pac-12 play this Thursday at California.  The Bruins enter that contest after going 4-3-0 against non-conference competition.  The surprise is that they have losses at home to west coast teams San Francisco 1-0 (2-6-1) out of the West Coast Conference and CSUN 2-1 (6-4-0) out of the Big West Conference and a loss on the road to UC Santa Barbara 3-1 (6-3-0) out of the Big West Conference.  The season is still young but at least for now, as far as the Bruins are concerned, it looks as if the balance of power on the west coast is shifting.

High Point University – The Panthers out of the Big South Conference are 7-1-0 with a 2-0-0 mark in league play.  HPU has won three in a row after being upset by Elon 2-1 at home.  Five of their wins to date have been on the road.  Last year the Panthers won the regular season Big South title but were denied an appearance in the NCAA Tournament when they were upset by Presbyterian in the conference tournament in a contest that was decided by a penalty kick shootout.  High Point’s remaining regular season schedule includes six Big South contests with games against Wake Forest and Duke sandwiched in between.  It is trite but true that a successful season at HPU is dependent upon the Panthers taking it one game at a time.  Junior forwards Ilias Kosmidis (7g, 2a), Siggi Benonysson (3g, 5a) and Jonathan Bolanos (2g, 2a) are among those who add punch to the High Point attack.  Senior backs Johnny Fenwick and Rashid Tetteh and redshirt junior goalkeeper Keegan Meyer add stability and determination on the defensive side of the ball.

Stanford – Stanford’s unbeaten streak was terminated at twenty-one when they were defeated at home 1-0 by Pacific.  The Cardinal conclude non-conference play (with the exception of a game with Denver on October 26) with a 3-1-3 record during which time they scored a total of seven goals while allowing only two.  The good news is that Stanford has recorded five shutouts in seven contests.  The not so good news is that they have been held scoreless three times.  This is a talented Cardinal team with a clearly successful system of play under Jeremy Gunn. Regardless, it remains to be seen whether the 2018 squad has the offensive firepower needed to prevail in the close contests that the Cardinal will no doubt encounter in Pac-12 play.  Right now, Stanford’s margin for error looks pretty slim.