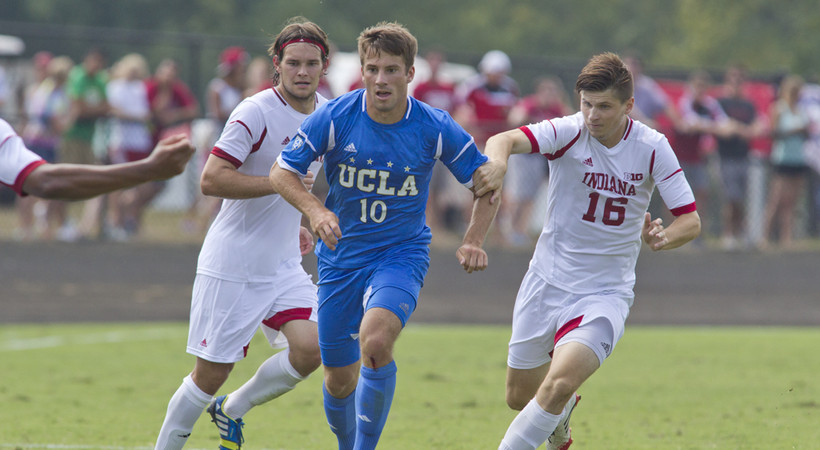 In soccer there’s always a plethora of different types of players, but usually the one’s who stand out the most are the playmakers.  These maestros frequently wear the #10 jersey, a trend started by the likes of footballing legends Pele and Maradona.  In college soccer, a rough physical game, an exciting and effective player is sometimes hard to come by.  With that said through the years, college soccer has produced some great #10s who have excelled on the pitch.  College Soccer News takes a look at some of college soccer finest true number 10s heading into the 2014 campaign.

Corey Baird (Stanford): The lone freshman on the list, Baird, is one of the smoothest on ball players in the country.  The midfielder is ranked #1 in College Soccer News’ 2014 high school graduating class and should make an immediate impact for the Cardinals.  Baird has been a key part in the U.S youth national team setup, shining with the U-17 national team under the direction of Richie Williams.  The Real Salt Lake academy player is a dual threat as a setup man and finisher and should see minutes under Coach Jeremy Gunn from the onset.  As a versatile midfielder, Baird is capable of playing on the wings or underneath a target forward, a valuable asset for the PAC-12 contenders.

Cristian Roldan (Washington): The 2013 National Gatorade Player of the Year did not disappoint in his first year in the collegiate game, leading the Huskies in points (19) and garnering College Soccer News All-Freshman Team honors.  Roldan (7g, 5a) is arguably the most exciting player to watch in the NCAA and is effective going forward.  The crafty midfielder really came into his own towards the end of the year and thrived playing centrally despite Washington’s direct style of play.  After rejecting a Generation Adidas contract from MLS, Roldan will look to make an even bigger impact this year in hopes of earning a larger contract and moving onto the professional ranks.

Adam Najem (Akron): As a freshman in 2013, Najem was fantastic leading the Zips with nine assists, a team record for a freshman, putting himself second in the country in that respective category.  Najem (4g, 9a) uses his great one v. one ability and explosiveness to beat his opponents.  The Red Bulls academy product shined for Akron last year despite their star-studded lineup and will need to impress even more for the MAC champions to succeed this year.  Despite being undersized, the College Soccer News All-Freshman honoree uses his body well, an attribute needed to excel in the college game.  As the only returning player in the top six in points from last year, Najem will have all the wait on his shoulders this year, something the first team All-MAC member is more than capable of handling.

Tanner Thompson (Indiana):  Maybe slightly overshadowed last year by his brother and current pro Tommy, Tanner (1g, 4a) is ready to take the spotlight for the Hoosiers.  Despite only starting one game last year, the quick midfielder ranked second the team in assists and will be a key piece for the reigning Big Ten tournament champs.  Thompson has pin-point passing accuracy and links up well with his forwards.  One of the most storied programs in history only returns three starters and will most likely take time to gel.  As the season progresses, look for Thompson to be the orchestrator for the eight time national champs.

Leo Stolz (UCLA):  Let’s not forget about the returning Hermann Trophy finalist.  Stolz (11g, 8a), the reigning PAC-12 player of the year is as solid of a playmaker the college game has seen in years.  The Bruins #10 has brilliant on ball skill and impeccable vision, the essentials to being a productive attacking midfielder.  Stolz, a College Soccer News preseason All-American selection will need to have a strong senior season for the PAC-12 favorites to win their first national title since 2002.  The Bruins, ranked 4 in the country by College Soccer News, arguably has even more talent and depth than last year, something that will only help Stolz’s stock.  Expect Stolz, one of the nation’s top players to be in contention for the Hermann Trophy, a national championship, and a top MLS draft pick selection come the end of this season.

Ben Roth is a contributing writer for College Soccer News.  He can be reached at rothpda@gmail.com.