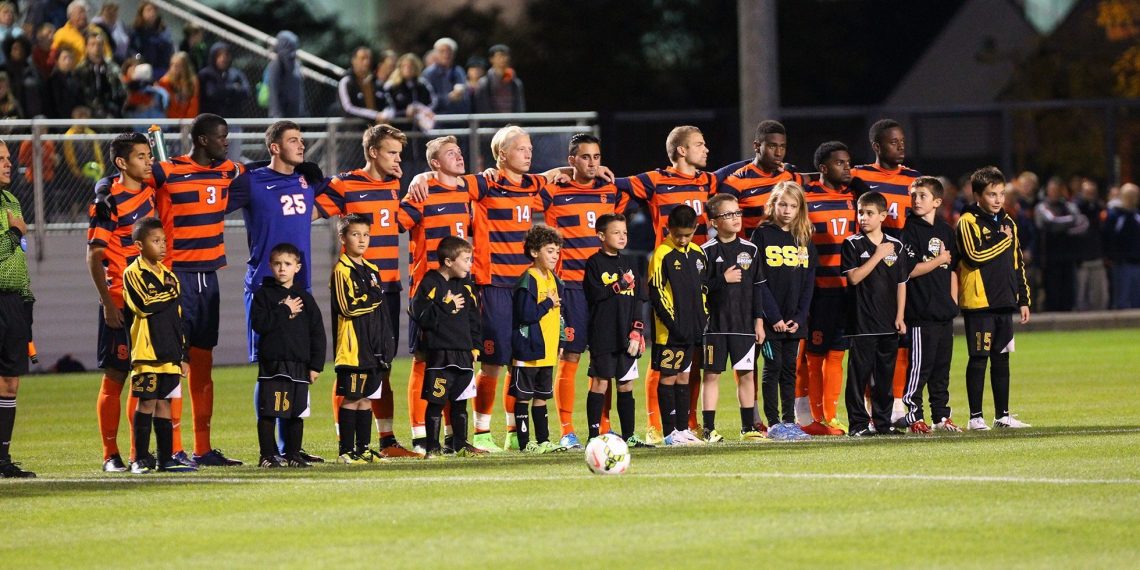 Syracuse continues to impress with a 4-0 win over Connecticut in Storrs. This has not been a banner year to date for UConn but such a dominant win over the Huskies in Storrs is still noteworthy.  The win over Connecticut was Syracuse's first on the road over Connecticut since the 2000 season.  The Orange also continues to be very productive out of set pieces with two of their four goals in the win over Connecticut coming out of corner kicks.  Syracuse has also been solid on the defensive side of the ball recording ten shutouts so far this year to up their record to 12-1-0. Ian McIntyre's team has another very tough contest on their dance card when they take to the road on Friday night to face Louisville at Lynn Stadium.  Louisville has had an up and down season to date with four straight defeats before topping Florida Gulf Coast 2-1 on Tuesday night.  The Cardinals appear to match up well with Syracuse so this one should be interesting.

After beginning the 2014 season with a 0-3-2 record the season didn't look very promising for Cal State Fullerton but under the direction of new head coach George Kuntz the Titans turned things around and have won seven out of their last nine games including their last three in a row to improve to 7-5-2.   Senior forward Marc Fenelus (4g, 2a) and senior midfielder Garrett Losee (4g, 1a) have played key roles on the offensive side of the ball.  The Titans will seek to keep their win streak alive when they travel to face a very solid UC Irvine team on Saturday, October 18.  UC Irvine will be a homecoming of sorts for Kuntz who served as the head coach for the Anteaters for nineteen years before leaving at the conclusion of the 2013 season to take the head coaching job at Cal State Fullerton.  UC Irvine under the direction of first year head coach Chris Volk enters the match with a 10-1-2 overall record.  In four contests to date at home the Anteaters have yet to allow a goal.

Xavier started the season with two losses during which time they uncharacteristically allowed a total of seven goals.  However they have rebounded and are now unbeaten in their past seven contests to improve to 9-3-1 overall with a 3-0-1 mark in Big East play.  The Musketeers have been rock solid on the defensive side of the ball recording seven clean sheets in their past ten games during which time they have allowed a total of only five goals.  Xavier has a tough game coming up on Saturday, October 18 when they host a very good Creighton team that is 11-1-1 overall with a 4-0-0 mark in Big East play.  Creighton will come into this one after topping St. John's on the road on Wednesday 1-0 as a result of a Fabian Herber goal out of a free kick in the last minute of play.  With Georgetown losing to Providence College on Wednesday to drop to 2-1-1 in conference play and Marquette coming out on the short end of a 1-0 contest with Butler to drop to 1-1-1 in conference play, the winner of the Creighton and Xavier match will be in first place in the Big East Conference.  A win over Creighton would be a good confidence builder for Xavier as well as a solid addition to their resume.  After Xavier tangles with Creighton they must take to the road to play Marquette and Georgetown.  Georgetown and Marquette are also the next two teams on Creighton's dance card but the Bluejays will face them at home in the friendly confines of Morrison Stadium.  The outcome of the three game stretch that includes Creighton, Xavier, Georgetown and Marquette will have huge implications for the Big East race.

The Indiana faithful are among the most supportive fans in the country.  So far this year they have had a lot to be excited about.  A lot of soccer remains to be played but so far it would be difficult to find a coach who has done a better job with his team than Todd Yeagley has to date.  IU is out to an 8-1-3 overall record with a 2-1-1 mark in Big Ten play.  The Hoosiers have signature wins over Marquette, Saint Louis, and Louisville.  They also have recorded ties with Georgetown, Butler and Northwestern.  Their lone loss to date is a 1-0 setback to Big Ten foe Penn State.  The Hoosiers will be tested this Sunday, October 19 when they host a revitalized Maryland side that topped LeHigh 2-0 Wednesday to win their third consecutive contest and improve their record to 6-5-2.  The Terps have struggled this year by their own standards but they were very impressive last weekend when they thumped Penn State 4-0. The Terps have their backs to the wall and will arrive in Bloomington ready to play.  This should be one of the better contests of the weekend.

Oakland recorded its fifth consecutive win and fourth consecutive shutout on Wednesday night when junior Shawn Claud Lawson scored twice to lead the Golden Grizzlies past Milwaukee on the road to up their overall record to 5-5-1 with a 4-0-1 mark in Horizon League play.  Place Eric Poque's Oakland team on the short list of teams that are gaining momentum.  Oakland netminder Wes Mink has not allowed a goal in over 399 minutes of game action.  Mink and his teammates will seek to keep the ball rolling when they host Belmont in an Horizon League match on Saturday.

Siena picked up a big win in MAAC play on Wednesday when they defeated the Golden Griffins from Canisius 1-0 to improve to 9-5-0 with a 4-1-0 mark in conference play.  Iona topped Saint Peter's 4-3 on Wednesday to up their record to 7-4-2 overall with a 4-1-0 mark in MAAC play.  Iona jumped out to a 3-0 lead but they flirted with disaster when they allowed the Peacocks to score three second half goals to knot the score before freshman Marcos Nunez netted the game winner for the Gaels.  Siena and Iona are tied atop the MAAC standings but Iona topped Siena when the two teams squared off back on September 30.

After losing to Davidson and Syracuse, the Virginia Cavaliers have secured wins over James Madison, Pittsburgh, George Mason and Duke.  The Cavaliers are 8-3-1 with a 3-1-1 mark in ACC play.  They have a difficult match slated for Friday when they travel to face Clemson at Historic Riggs Field.  The Tigers are 6-6-0 with a 3-2-0 mark in conference play.  The Virginia defense anchored by goalkeeper Calle Brown has been a team strength as the Cavaliers have allowed a total of only seven goals to date.  Midfielder Eric Bird is the catalyst on the offensive side of the ball for Virginia.   Clemson has played everyone tough so this one could go either way.

Harvard has been flying under the radar on the national scene this year for a team that has now won eight straight to improve to 8-3-0 with a 2-0-0 in Ancient Eight play.  The win streak is the longest for the Crimson since the 2006 campaign.  Harvard is playing very well together as a team and has been very effective at finding a way to come up with the big play needed to give them the edge on the offensive side of the ball.  They have allowed a total of only eleven goals to date with six of the eleven coming in season opening losses to Georgetown, George Washington and St. John's.  Harvard will put its winning streak on the line when they travel to face Brown in Ivy League action on Saturday.

Northwestern's six-game unbeaten streak came to an end on Tuesday in South Bend when they were topped 1-0 by Notre Dame.  Patrick Hodan's penalty kick proved to be the difference maker for the Irish.  Northwestern has allowed a total of only seven goals to date with three of the seven coming out of penalty kicks.  Joey Calistri (4g, 2a) and Cole Missimo (4g, 2a) power the Northwestern attack.  Senior Tyler Miller can hold his own with anyone between the pipes.  The Wildcats will seek to start another winning streak when they tangle with Rutgers in Big Ten play on Saturday in Piscataway, New Jersey.

Hofstra's streak of five consecutive shutouts came to an end on Wednesday night when they were defeated 2-1 by Delaware in a key CAA contest.  The loss dropped Hofstra to 7-4-2 overall with a 2-1-0 mark in conference play while Delaware improved to 9-4-0 with a 2-1-0 record in conference play.  Things don't get any easier for Hofstra as the Pride now must travel to face a James Madison team that defeated Delaware 1-0 on the road on October 8.  Elon's 2-1 win over UNCW on Wednesday night established that the regular season title is going to come down to a photo finish in what looks to be a very wild and action packed year in the CAA.

Something has to give soon in the Big South Conference race which is just beginning to heat up.  Radford is 5-0-0 in conference play, Coastal Carolina is 4-0-0, Winthrop is 3-0-0 and High Point is 3-0-0.  Radford and High Point face each other on Friday which will begin the process of separation in the Big South.  Winthrop travels to face UNC Ashville and Coastal Carolina hosts Liberty on Saturday.  Coastal Carolina with a 9-3-0 overall record and Winthrop with a  9-2-0 record are attracting attention on the national scene.  Both have high powered attacks.  Radford is 8-2-2 overall.  The Highlanders also have a high octane attack but have been equally impressive on the defensive side of the ball having allowed only nine goals to date.  Look for the Radford defense to be tested by High Point University forward Mamadee Nyepon who has found the back of the net nine times to date.  HPU enters the contest with Radford with a 5-4-1 overall record.

SMU and South Florida with tangle on Saturday night at Westcott Field in Dallas in a contest that could determine who ends up on top in the American Athletic Conference.  A win in this one will also enhance the standing of the winner on the national scene not to mention their RPI.  SMU struggled early on losing three of their first four contests but have rebounded and are undefeated in their last eight outings to stand at 8-3-1 overall with a 3-0-1 mark in conference play.  South Florida will arrive in Dallas off a good 3-0 non-conference win over the University of Denver and stands at 8-4-0 with a 3-1-0 mark in conference play. Both teams like to run and gun so this one has the potential to be very exciting.