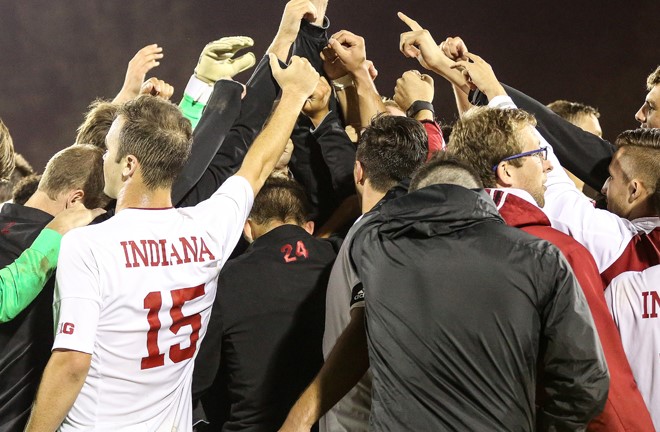 Teams are beginning to gel and settle into their rhythm. It is still early in the 2017 season but the intensity of play is picking up across the country with numerous key contests slated this weekend.  Each of the eleven games listed looks to be a momentum builder for the winner with the potential to be a springboard for the entire season.

Indiana (4-0-0) vs. Maryland (4-0-0) – Friday – This “something has to give” NCAA Tournament like Big Ten match-up pits two of the most successful programs in the country against each other and has huge implications in regard to the Big Ten Title race as well as national standing.

Maryland has an explosive attack that includes forwards Gordan Wild (3g, 0a), Sebastian Elney (1g, 1a) and Eryk Williamson (2g, 2a). Midfielder Jake Rozhansky is among several other Terps who add punch to the offense. The Maryland defense that includes backs Chase Casper, Miles Stray, Johannes Bergman, and George Campbell and goalkeeper Dayne St. Clair looks to be a work in progress that will continue to improve as the season progresses. .

This contest will match a high powered Terp attack against a very solid Hoosier backline.  This one could go either way because both teams are very good. However, all things considered, it is likely that Maryland will prevail if their attack is clicking.

Louisville topped Georgia State 1-0 on the road on September 1.

Both teams have guys on both sides of the ball that are playmakers. Forward Mohamed Thiaw and back Tim Kubel will play key roles for Louisville. Luis Argudo, Jon Bakero, and Brandon Servania are among those who add punch to the Wake Forest offense.  It is early in the season but this will no doubt be a momentum builder for the winner.

Syracuse (3-0-1) vs. Virginia (3-0-0) – Friday – Two of Virginia’s three wins to date have been in overtime including their most recent victory over UNCW. The Cavaliers have shown that they have the ability to come up with the big play when needed to secure a win but they also have been living a little on the edge.

A young Syracuse squad has played well but is still in the process of gelling as a team.  Both teams have the potential to be very good this year but just how good remains to be seen.

Give Virginia the edge due to the home field advantage and the fact that they are the more experienced team but the truth is this one could easily go either way.  The contest will feature two of the best netminders in the country.

Tulsa (0-1-1) vs. Stanford ( 3-0-0 ) – Saturday – Tulsa takes to the road to face Santa Clara on Thursday before they tangle with the number one ranked Cardinal. Tulsa comes into this contest off a 2-0 loss to Missouri State in which they struggled on the offensive side of the ball.

Stanford is the stronger team from top to bottom and should dominate the contest up-top with Foster Langsdorf and Corey Baird powering the attack. However, Tulsa head coach Tom McIntosh always fields a competitive side so don’t count out the Golden Hurricane.

Boston College has been on a roller coaster ride so far this year winning their first two contests before coming out on the short end of the scoreboard with a 2-0 loss to New Hampshire and a 3-2 loss to Xavier.

If Boston College can put together a full ninety minutes of play and avoid the lapses in play that hampered them in their two losses, they have a reasonable shot of upsetting the Irish and getting back on track.  On the other hand, if the Eagles have any weaknesses the Irish will exploit them.

Pacific (4-0-0) vs. UNLV (1-2-0) – Friday – Pacific returns from a successful trip to the east coast during which they picked up wins over Virginia Tech and James Madison but must hit the road again to tangle with UNLV in Las Vegas.

UNLV opened the season with a good 3-2 win on the road over Portland followed by a 1-0 loss to Oregon State in Albuquerque and a 3-0 thumping from New Mexico in a contest in which senior forward Danny Musovski was shown a red card in the early going.

With Musovski in the lineup for UNLV the contest with Pacific had the makings of an upset but without him on the pitch that is much less likely to occur. Nonetheless this one belongs on the upset watch list.

Akron (1-2-0) vs. UCSB ( 0-2-2) – Saturday – Akron opened the season with 1-0 season losses on the road to Utah Valley and Denver. However, they returned to the friendly confines of FirstEnergy Stadium and rebounded by defeating highly regarded Washington 2-0.

The return of redshirt senior forward Sam Gainford to the lineup in the contest with Washington helped to add additional punch to an Akron attack that didn’t score during their first two losses. Gainford joins fellow senior Stuart Holthusen to give the Zips a potent combination up-top.

Akron picks up some more frequent flyer points with a trip to Santa Barbara where they will tangle with a UCSB squad that has had problems of their own with an offense that has produced only one goal in four games.  Nonetheless look for veteran Gaucho head coach Tim Vom Steeg to eventually sort it out and for the UCSB offense to get back in gear as the season progresses.

Virginia Tech (2-2-0) vs. Duke (3-0-1) – Friday – The Hokies opened the season with a 2-0 win over Creighton then dropped two in a row before topping Binghamton 2-1. Senior forward Marcelo Acuna (3g, 0a) is the key to the Virginia Tech offense.

A young Duke team opened the season with three straight wins before settling for a disappointing 1-1 tie against a packed in Presbyterian defense on Tuesday night. This looks to be a must win Atlantic Coast Conference contest for both teams.

The Wildcats should prevail and keep their win streak alive but a Columbia team that has performed well on the defensive side of the ball could make this one interesting.

The Wolfpack come into the game with a 3-2 win over Florida Atlantic and a 3-2 loss on the road in overtime to a good William and Mary side.

This one is significant because it is NC State’s inaugural Atlantic Coast Conference contest under the direction of new head coach George Kiefer. Clemson should outgun the Pack but look for Kiefer to have his team fired up and ready to battle.

Wisconsin (1-0-2) at Michigan (3-0-1) – The Badgers opened the season on the road with a 2-2 tie with Tulsa and a 1-1 tie with Oral Roberts before returning home to top Grand Canyon 3-1 with seniors Mark Segbers, Mike Catalano and Tom Barlow netting a goal each.

Michigan is off to a promising start with wins over William and Mary, Cleveland State and Dartmouth and a tie with Valparaiso.

Both Wisconsin and Michigan have hopes for a solid season and a berth in the NCAA Tournament.  This Big Ten opener is important for both teams since it will be a huge momentum builder for the winner and could set the pace for the remainder of the season.

Georgetown (4-0-0) at Connecticut (1-2-0) – Saturday – The Hoyas are looking good with wins over American, Coastal Carolina, Cal Poly and most recently UCLA.  Forward Achara (5g, 0a) has been the key ingredient to date in the Georgetown attack while goalkeeper JT Marcinkowski has anchored an impressive Hoyas defense that has allowed only one goal in four games.

Connecticut opened the season with an unexpected 1-0 loss to Iona, followed by a 1-0 win over Quinnipiac in overtime, and a tough 1-0 loss to Notre Dame.  Abdou Mbacke Thiam has produced the lone UConn goal in what has been a less than proficient Huskie attack to date.

Chances are pretty good that this contest will be decided by a single goal.